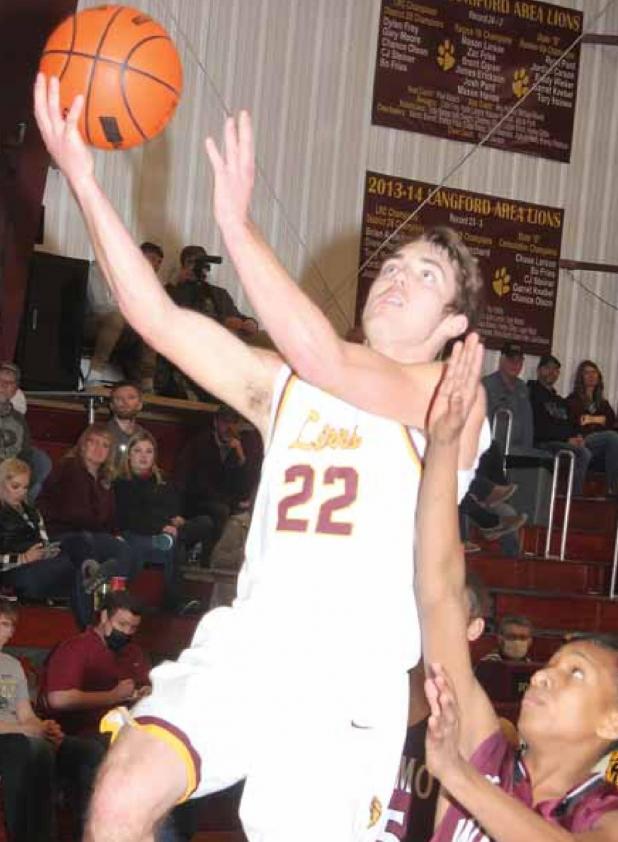 The Lions’ point guard scored his 1,000th career point against Groton Area last week Tuesday and now has 1,032 points in his prep basketball career. He will be recognized during Parents Night on Friday when the boys and girls squads host Faulkton for a doubleheader.

Not many reach the 1,000-point plateau, and it doesn’t happen by accident. A strong work ethic, a positive attitude, and an ability to be a good teammate are all parts of that recipe of success.

“Colin is a hard worker and very dependable,” said LA coach Paul Raasch. “He shows up every day ready to play whether it’s practice or a game, and he is a good leader by example. Colin has a good positive attitude and is respectful to teammates, coaches, opponents, and officials, and he has a quiet confidence about him that is important to our team. It’s a neat honor for Colin to reach this milestone, and he’s very deserving of it.”

Ironically, the school’s latest 1,000-point scorer lists playing “pretty good defense” as his biggest strength, but Frey has had a basketball in his hands for just about as long as he can remember.

“Basketball has been my favorite sport since I started playing games in third grade,” said Frey, the son of Mike and Sara Frey of Claremont. “It has just been a part of my life, and I just like having a basketball in my hands.”

But basketball isn’t all that Colin Frey is about. He is also active in the school and community away from the athletic arena.

“If you looked up the definition of all-around nice guys there would be a picture of Colin Frey,” said LA superintendent Monte Nipp. “He’s not only a leader on the athletic field but he is also in the school as a team teacher that teaches character lessons to elementary students, a band member, and an honor roll student. He has also been a longtime 4-H member.”

Nipp said that Frey’s actions away from athletics mirror his dedication on the basketball court.

“Whether in the classroom, on the athletic field, or in the music room you are going to see Colin there and giving it his all. He’s very committed to what he does and is such a good role model.”

Frey gives credit to those who have gone before with helping him develop as a player and a person, and now that torch has been passed to him.

“I had quite a few role models growing up,” said Frey. “I remember looking up to Bo Fries, Mason Larson, and Chance Olson in any sport they played, and Drew Planteen was one of the hardest working kids I watched. I was just hoping to be like them when I grew up. And I couldn’t do what I did without all my teammates and coaches. It’s been a lot of fun and I’m going to miss spending all that time with them.”

“I try to lead by example, and when I’m on the sideline I try to talk to the younger kids and help them get better.”

Mark Nelson, who serves as the Voice of the Lions at all home games, has a front row seat to see that leadership ability in action.

“Colin has strong leadership skills on and off the court,” said Nelson. “During the game he stays focused and rarely gets rattled, and he has that winning mentality. Off the court, his leadership skills shine even more where he is active in many groups and is often seen working as a volunteer. You can tell Colin cares about the school and community.”

Frey isn’t planning to continue playing football or basketball on the college level. He will attend South Dakota State University and major in ag business with a possible minor in accounting with hopes of coming back to the family farm.

Lessons learned on the hardcourt will almost certainly follow Frey throughout his life.

“I just try to be the hardest worker on the court, whether in practice or a game,” concluded Frey. “I want to be tired at the end of every game and practice and put everything I have into it.”

“Colin is a hard worker and very dependable. He shows up every day ready to play whether it’s practice or a game, and he is a good leader by example.”