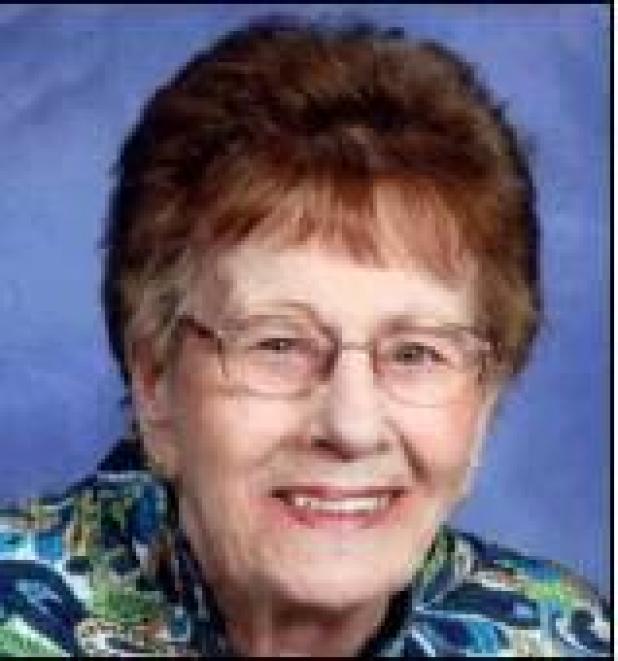 Her memorial service will be held at 10:30 a.m. on Wednesday, September 4, at the Cogswell Nazareth Lutheran Church in Cogswell. Burial will be at the Brampton Cemetery.

Marian Eleanor Iverson was born in Lisbon, ND, on May 18, 1927, to Edward and Muriel Iverson. She and her mom were not able to return to the Iverson farm until Marian was almost a month old due to muddy and bad roads. Marian was baptized in the Bert Anderson grove of trees at an outdoor service of Brampton Lutheran Church and pot luck dinner. She grew up on the farm which was a tree claim of grandfather Ole Iverson on September 1889 before North Dakota was a state. She attended Brampton #4 county school before graduating from Brampton High School in May 1945. Marian then attended Ellendale Normal Industrial College receiving an emergency Teaching Certificate.

She taught for one year before marrying Paul Johnson in Fergus Falls, MN, on October 16, 1945. To this union were born two children: their son, Richard Paul, born September 13, 1946 in Astoria, OR, and daughter, Kathleen Ann, born December 27, 1949 in Britton, SD.

Over the years Paul and Marian lived near Astoria, OR; Stirum, ND; Forman, ND; Gwinner, ND; and Brampton, ND. During the years Paul was employed by farmers before passing away from cancer on December 27, 1986. Marian continued to live on the Iverson farm where they had moved their mobile home on July 24, 1984, (which now son Dick and Jill own). In November 2017, Marian moved into an apartment in Oakes, missing the farm where she grew up.

Over the years Marian was employed as a substitute teacher in Astoria, OR; at the Forman Manor; the Sargent County Teller; Clark Equipment in Gwinner, ND; a Homemaker Home Health Aide; and at Heimbuch Potato and Onion Farm. She was also the correspondent for the Brampton News at The Britton Journal for many years. She was active in many groups and organizations serving as District #10 president of the American Legion Auxiliary for two years, and served in various state and local Legion Auxiliary positions for over 30 years. Marian served as President, Secretary, and on various committees at the Nazareth Lutheran Church over the years, as well as the Brampton Lutheran Church Council before they closed in 1995 and the church was moved to Norway. One of her big projects was helping feed the Norwegians and keeping a pictorial record of the job.

The years spent in Oakes were busy years with quilting, family ancestry, and other projects filling her time. She was happy and content with so many of her possessions around her and family to visit.

She was preceded in death by her parents; husband, Paul; two sisters, Mildred Anderson and Elizabeth “Betty” Anderson; her son-in-law, Greg Strutz; and granddaughter Jennifer Strutz.