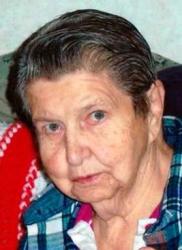 The memorial service for Luella Wiedmeier will be held at 2:00 p.m. today, Wednesday, April 19, at the Price Funeral Chapel of Britton. Rev. Terrill Sorensen will officiate and inurnment will be in the Britton Cemetery. Luella passed away on Friday, April 14, 2017, at Wheatcrest Hills in Britton at the age of 92. Luella A. Meyer was born on December 11, 1924, in Britton, SD, to Thomas Henry “Tom” and Thelma L. (Geppert) Meyer. She grew up and attended school in Britton. She was married to Fredrick Henry Burger, and together they became parents of seven children: Lena Cox of Groton; Max Burger of Britton; Dennis Burger (deceased); Ann Rolie of Groton; William Burger of Howard, SD; John Burger- Hohm of Freeman, SD; and Patrick Burger of Pierre. On October 10, 1957, she was married to Ruben Wiedmeier in LaMoure, ND. They had three children: Randy Wiedmeier (deceased); Sandy Crowe of Aberdeen, SD; and Ruby Ibis of Kidder. Luella lived most of her life in the Britton area, except for a few years following her marriage to Ruben, when they lived in Aberdeen. They moved back to Britton; and after Ruben’s death on February 5, 1988, Luella continued to make her home in Britton. In addition to raising her family, Luella had a few part time jobs, one of which was working as a nurse’s aide at a nursing home. She enjoyed listening to country music. Perhaps Luella was her happiest when she was fishing. She was always willing to lend a helping hand to anyone in need, and had a kind and caring spirit. In addition to her children named above, also surviving her are 25 grandchildren; several great-grandchildren; two sisters and two brothers: Marlene (Robert) Hardina of Britton; LaWanda (Richard) Larson of Ft. Collins, CO; Dexter Meyer of Britton; and Roger Meyer of Red Bluff CA. Preceding her in death were her parents; her husbands; a brother, Raymond Meyer; and two infant siblings. The Price Funeral Chapel of Britton has been entrusted with her arrangements. An online guestbook and obituary are available at www.pricefuneralchape.net.