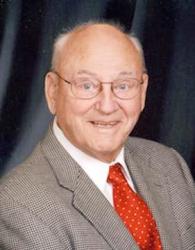 John W. Owen, age 87, of Watertown, formerly of Britton, passed away on Tuesday, April 4, 2017, at Jenkins Family Living Center. A Celebration of Life service was held on Monday, April 10, at Lutheran Church of Our Redeemer in Watertown. Pastor Kent Stillson officiated with Pastor Scott Dempster assisting. Robbyn Givens was the soloist with A. J. Sherrill as pianist and Marian Riddle as organist. Military honors were conducted by VFW Frank H. Adams Post 750, American Legion Codington County Post 17 and SD Army National Guard Honors Team, all of Watertown. Interment was at Webster City Cemetery in Webster. Honorary Pallbearers were Mike and Barb Bergh, Ryan and Kim Bergh, Alan Waletich, Loren Berg, Ray and Vicki O`Farrell, Gene and Marlys Popham, Jerald and Nelda Popham, Stan and Donna Busskohl, Kay Friebel, Bill Smart, Customers and Employees of Owen Livestock and Customers and Employees of SD Livestock Sales. Pallbearers were Grant Titze, Tom Aljoe, Greg Schaaf, Randy Damgaard, Laverne Schmig, Terry Schlagel, Jim Rokusek, and Ryan Patterson. John William Owen was born on April 25, 1929, at home in Grant County (south of Waubay), South Dakota to William Warren and Pearl S. (Christianson) Owen. He grew up in Lura Township and attended rural school. He graduated from Waubay High School in 1947. John served in the US Army during the Korean War, and on a two week furlough, he married Beverly Hagen on April 1, 1952, at St. John’s Lutheran Church in Webster. Three children were born to this union, Kathryn, Randy, and Karen. The family moved to Britton in 1956 to manage the Britton Sale Barn. They also operated the Ben Franklin and Britton Realty for a number of years. After leaving the sale barn, John formed Owen Livestock and was an independent cattle buyer. In 1981, John and two partners purchased SD Livestock Sales in Watertown. He was the big ring auctioneer until he retired. In his spare time John loved to do woodworking, and Bev had the ideas so they became quite a team. They “flipped houses” before flipping became popular. The two were very involved in the Britton community. He was a member of First Lutheran Church, Britton City Council member, and friend of 4-H. He was an avid trap and skeet shooter, even building his own range. In 2007, after moving to Watertown, John was awarded the People’s Choice Award which gave special tribute to unsung individuals who made a difference in the (Britton) community through caring efforts and passion to preserve the area’s history for future generations. He was an original member of the Prayer Rock Museum in the 1960’s, and served as Board Chairman for many years and coordinated the museum’s move to its current location. In 2009, John was inducted into the SD Auctioneer Association Hall of Fame, and in 2010 he was awarded SD Auctioneer Association People’s Choice Auctioneer. John’s true passion was selling cattle. He was also a farmer, businessman, pilot, real estate agent, and real estate broker, and his favorite of all, a family man! John is survived by his wife, Beverly of Watertown; his children, Kathryn (Paul) Macek of Watertown, Randy (Chris) Owen of Watertown, and Karen (Ertugrul) Owen Tuzcu of Minneapolis, MN; his three grandchildren, John Paul Macek of Roseville, CA, Steven (Jenny) Macek of Houston, TX, and Zeynep Kathryn Tuzcu of Minneapolis, MN; He was preceded in death by his parents; his brother, Olin “Bud” Owen; and his sister, Mavone Eidet. Memorials may be directed to Lutheran Church of Our Redeemer, Prayer Rock Museum in Britton, or SD Parkinson’s Association.