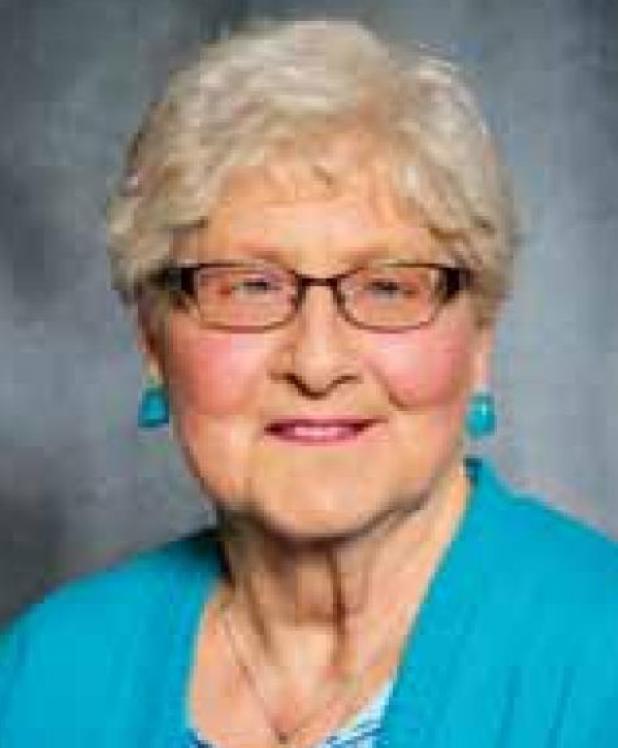 Britton, SD: Dorothy Mae (Hagen) Christenson, 87 of Britton, died Tuesday, July 21, 2020 at Marshall County Healthcare Center with her family at her side.

Due to COVID19 restrictions, a private family funeral will be held at First Lutheran Church of Britton at 10:00 a.m. Monday, July 27, 2020 with Rev. Terrill Sorensen officiating. The service will be livestreamed on the Price Funeral Chapel FaceBook page.

Interment will follow at the Detroit Cemetery near Hecla. The ashes of Dorothy’s daughter, Janet Peterson will also be interred at the same time. Anyone who would like to attend the committal service is encouraged to meet the family at the cemetery at 11:00 a.m.

Visitation will be 5-7:00 p.m. Sunday, July 26, 2020 at the church, concluding with a time of sharing and devotions at 7:00. The use of masks and adherence to social distancing would be appreciated.

Dorothy Mae Hagen was born April 21, 1933 in Britton, SD to Edwin and Wubena (Abbas) Hagen. As a youngster, she attended Waverly #4 School, also known as the Hagen School. At the age of ten, Dorothy’s life was changed forever in two different ways. The first was when a piano was brought into the home. She often referred to it as the happiest day of her life! She and her sisters had prepared themselves for the day by practicing on a homemade paper keyboard that Dorothy had made, and attached to a window sill. Sadly, four days after Dorothy’s birthday that year, her father passed away, leaving Bena with their eleven children to raise on her own.

Dorothy graduated from Britton High School in 1951. She attended college at Northern in Aberdeen, where she received her teaching credentials. After being accredited, Dorothy taught in the same Waverly #4 School that she had attended as a youngster.

On September 16, 1955, Dorothy was united in marriage with her high school sweetheart, Rollin Oscar Christenson. It was the uniting of the church organist and the head usher – a union that would last nearly 59 years until Rollin’s death on September 1, 2014. They made their first home on the Quarve family farm for about a year until Rollin was called to military duty. He was stationed at Ft. Belvoir, VA and Dorothy was able to go with him. Before she could get out of her teaching contract, the school board told Dorothy that she’d have to find her own replacement, so she did.

During their time in Virginia, two daughters were born. They also became ardent fans of the Washington Senators baseball team. When the Christensons returned to South Dakota, the Senators would move to the Twin Cities, and become the Minnesota Twins. Rollin and Dorothy remained staunch fans, and often remarked that it was nice of the Twins to follow them back to the Midwest!

Rollin and Dorothy remained at Ft. Belvoir until his honorable discharge in 1958, when Rollin was released early from his military obligation to help with harvest on the farm. They returned to South Dakota and began farming. They formed a farming partnership with Adolph and Berneice Odland, which proved to be beneficial to both parties. The partnership known as BROC Farms evolved into one of a feeling of true family, and not just business associates. Adolph didn’t live long enough to see how the partnership flourished, however future generations of Christensons will know they owe a lot to their “Grandma Berniece.”

Dorothy was the consummate farmwife. Whether it was cooking for the family and hired men, running to town for parts, driving grain truck or anything else that needed doing, Dorothy was ready to pitch in. She loved cooking the large harvest meals that were served during that special time of year. After Rollin passed away, Dorothy enjoyed driving her Gator around the farm, checking the crops, inspecting the buildings and taking care of her flowers and beloved zinnias.

Her devotion to the Minnesota Twins was truly legendary. She had the honor of meeting Frank Viola when he was pitching for the Twins. On a number of occasions, Frank would refer to the lady who drove six hours, just to meet him! Dorothy’s family remembers one Christmas when there was a package under the tree that had a tag that was to Dorothy, from Santa gifts were opened Dorothy Claus. After all of the other opened that package and it was season tickets to the Twins home games for 1988. After a the tickets really came from, lot of questioning about who Dorothy finally admitted that she’d ordered them herself! They were part of many of Twins eclipsed the three mil those home games when the lion paid attendance mark for the first time.

As the boys got old enough to help with more of the farm work, Rollin and Dorothy began to enjoy many things in life. They had made several friends during their time in the service, and bi-annual reunions took them to many corners of the United States. They hosted one of the reunions at the farm. In 2006 they bought a Corvette and spent many enjoyable hours touring the country in their sports car. They became the envy of lots of folks, much younger than they were. They were also blessed to enjoy a number of winters in Texas.

Dorothy was truly the number one fan for each of her kids. She was usually a rather vocal spectator, and made sure that any official that wasn’t seeing things correctly, had a little help from her. After raising their own six children, Rollin and Dorothy had the privilege to help raise two of their grandchildren, Mike and Mark Daly. They lived with their grandparents in the 1990’s, and Dorothy always remarked how keeping up with them kept her and Rollin young!

Dorothy was a member of the First Lutheran Church of years old, Dorothy started Britton. When she was 16 playing the organ at church, and gave dedicated service for more than 60 years. She will be remembered for her willingness to share her musical In addition to the many talent whenever called upon.

In addition to the many church services, weddings and funerals that Dorothy played for over the years, she also did crocheted an afghan for each beautiful handwork. She had of her children and grandchildren. She also enjoyed fishing, especially on the river. came out, and nothing pleased Her competitive spirit really her more than to out-fish the others, especially Rollin.

She always encouraged her children to not only do their best, but to always be their taken to heart by each of them. best. That admonition was They not only lived it, but as well.

The Price Funeral Chapel of Britton has been entrusted with Dorothy’s arrangements. An electronic guestbook and obituary are available at www.pricefuneralchapel.net.