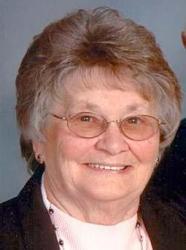 The Mass of Christian Burial for Doloris Samson will be held at 10:30 a.m. on Thursday, December 29, at Sacred Heart Catholic Church in Eden. Doloris’ grandson, Rev. Fr. Jordan Samson will preside and Rev. Fr. Brian Simon will concelebrate.

Visitation will be 6-7:00 p.m. on Wednesday at the church in Eden, concluding with a 7:00 p.m. vigil service. Interment will be in St. Michael’s Cemetery of rural Eden, under the direction of the Price Funeral Chapel of Britton. Doloris passed away peacefully on December 24, 2016, at Strand-Kjorsvig Living Center in Roslyn at the age of 91.

Doloris was born at home on the family farm in Lake Township on September 27, 1925, near Eden to Henry and Theresia (Sattler) Steiner.

She attended Eden No. 6 School. She attended one year of high school in Eden and graduated from Sisseton High School.

On June 10, 1947, she married Jerome Samson. In 1987 she and Jerome moved to Eden where they resided until early 2014 when they moved to the living center in Roslyn.

After graduation she went to Seattle, WA, and was employed at the Naval Air Station for two years. After returning home she taught at a country school in Buffalo Township for one year. She worked at Dakotah, as an aid at the Eden School, and in 1976 started work at the Farmers’ Elevator in Eden as bookkeeper where she retired 14 years later.

Doloris was involved in the community. She co-chaired the 50th Eden Jubilee and was an active member of the Altar Society and Hectic Homemakers.

Doloris was an avid baker and bird watcher. She was a talented seamstress who among her many projects provided graduation blankets for the grandchildren. She loved attending and cheering all her children, grandchildren, and great-grandchildren’s games and events.

She leaves her daughters, Mary Wagner and Patty Wagner; her sons, Curtis Samson and Jerry Samson; her brother, Willis Steiner; 17 grandchildren; and 26 great-grandchildren.

Preceding her in death were her husband, Jerome; siblings Edward, Leonella, Walter, Thomas, Genevive, and Dennis; and her loving daughter, Connie Grote.

An online guest book and obituary are available at www.pricefuneralchapel.net.