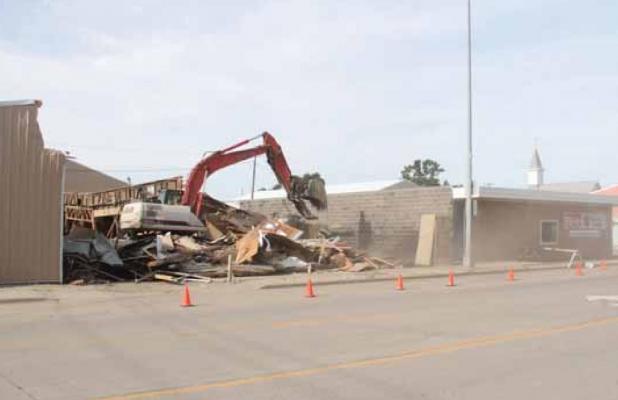 Demolition work began last week Wednesday on a portion of the Scott’s Lumber building last week. At one time the building was a livery stable and was well over a century old.

The top photo shows how Scott’s Lumber looks today from the east after the demolition of two long-time buildings that had been used for storage.The bottom photo, courtesy of Ed Jerde, is a view taken from atop the Marshall County Courthouse of the Home Lumber Company by NA Brothers about 1910 that was taken down.

A piece of Britton history came tumbling down last week.

Scott’s Lumber demolished a portion of its building on Vander Horck Avenue that had recently been used for storage. But the building and the lumber yard industry has a long Britton history.

Information from the Britton History Book said at one time there were three lumber yards in Britton. In 1883 D.T. Hindman started a lumber company, and in 1884 he had 50 carloads of lumber shipped to Andover and hauled the lumber to Britton by team and wagon. Albert Wismer also owned a lumber yard at one time and sold it to the Williams Lumber Co.

Charles Wismer became associated with the Quamen Bros. Lumber Co., in 1902. In 1917 he established his own business at the current site of Scott’s Lumber called The Home Lumberyard in an old livery barn, the building that came down last week. One

Charles saw several “hard times” but he always managed to weather the problems. He said that once after the first World War the lumber yard made only $1200 for the year.

Moritz Wismer became a partner with his father in the 40’s and managed the business. The lumber yard was incorporated in the 40’s with Charles, Moritz, and Clara as officers. The name of the business was changed at that time to Wismer Lumber Yard.

In 1950 the lumber yard was remodeled. The old office was moved away, and a new store and office were built. At that time Charles was in poor health, and Moritz would bring him to the store to see what improvements were being made. Various patterns of plywood covered the walls and glass blocks were used in building the office. (Novelty plywoods and glass blocks were new items to the trade).

When the new store was completed, Charles said, “Well if you can’t make a go of it in the lumber business you could rent it out for a beauty shop.” The new building was a far cry from the old office.

In 1963 when Moritz died, his two sons Charles F. and Richard M. took over the business. They added the building and also added new lines of merchandise. In 1967 they had an open house to celebrate the 50th year of the Lumber Yard. In 1971 they sold the business to Richard Schornak, Jim McFadden, and Donald Froelich. Dean Enderson became manager and by 1977 Enderson and Schornak were the owners.

For many years the employees were hired for only seven or eight months a year, as for many years the snowfall was heavy and not much building could be done during the winter. After Richard and his father started Dakota Boats, Wm (Al) Rice, Homer Dusing and Darrell Brash worked full time, working at both businesses.

In 2006 Terry Fredrickson retired, and 2010 brought the sudden passing of John Kraft and started the retirement process for Clyde Fredrickson. At that point, Josh, Luke, Matt, Melissa and Drew became NexGen. In November of 2016, NexGen sold Britton Lumber to USLBM Holdings, LLC, and Josh Kraft continues to manage the business now known as Scott’s Lumber.