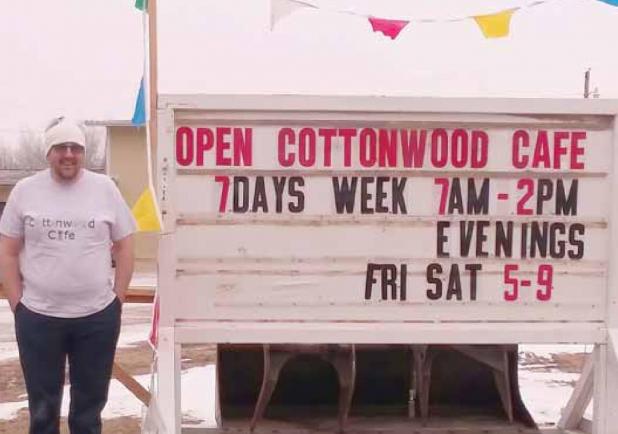 The Cottonwood Café located on Main Street in Hecla opened in January and is owned by Andrew Murray. (Sarah Hoops Photo)

A new business has opened up on Main Street in Hecla. Its owner: a former tree worker and inventor. Its focus: food.

Andrew Murray, originally from Stratford, is the proud owner of the Cottonwood Café. The new restaurant first opened in mid-January of this year and is open seven days a week from 7 a.m.-2 p.m. and Friday and Saturday evenings from 5-9 p.m.

Murray’s first business began when he was a young child. Years later in 2001, he started a tree business. It was here that he learned how hard it is for some people to get a nice, warm meal in the morning. This fueled his ambition to start a business where somebody can get a hot cup of coffee before a long day of hard work.

In 2010, Andrew patented an invention for heating appliance technology. The item is named Round for a Reason. It is a stove with a special combustion chamber design. His latest achievement, the Cottonwood Café, gives Andrew an opportunity to both display and advertise his businesses and invention.

After church, many people head to the Café to meet and talk, making Sundays his most popular day of business. On average, he gets 10-15 people every day. With reasonable prices, the menu is full of choices for beverages and food. Andrew’s most popular breakfast order is the breakfast sandwich, while his cheeseburger and fries are the most popular lunch item. The hamburger buns that he uses in his meals are homemade using his own recipe. He does not own a deep-fat fryer, using a convection oven instead. This is a healthier alternative, and it makes less of a mess.

The reason he has chosen the career path of beginning a new business is the steady income and the challenge of keeping a business alive. His goal in starting this business is to meet new people, help others, and pay bills. Though he has no children, he has found his place as part of the family of Hecla.