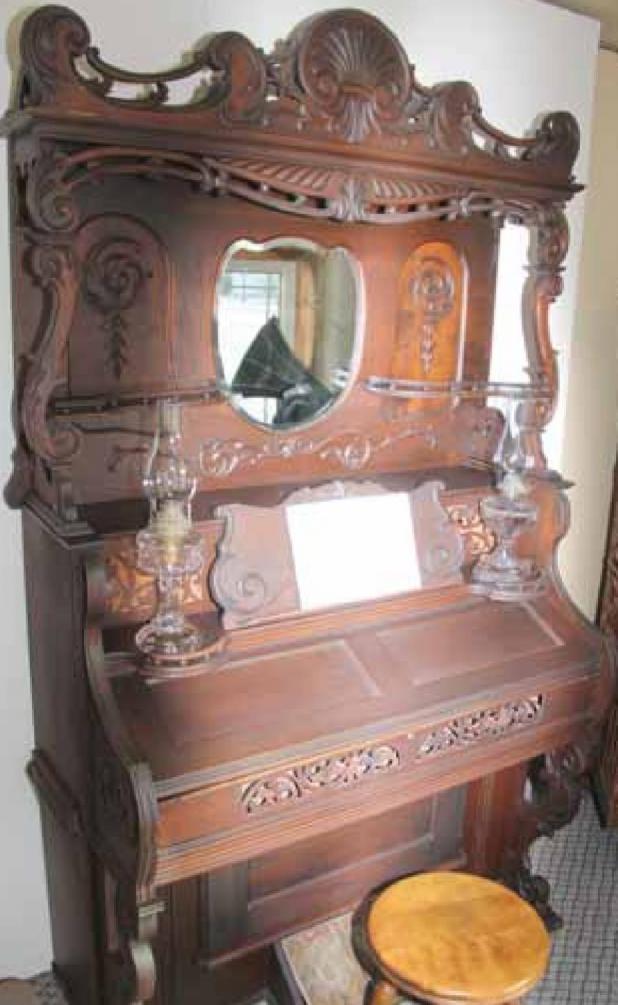 Louise Fiegel, above, was the original owner of the 109-yearold organ, left, now on exhibit at the Marshall County Prayer Rock Museum.

A bill in the state legislature that would allow home-school students to participate in extracurricular activities through the state’s public school systems drew the most discussion at a cracker barrel held at the Britton Area Event Center on Saturday afternoon.

Currently, decisions on allowing extracurricular participation by home-schooled students are made by the local school board. The legislative bill would force school districts to let students educated at home participate in high school activities. It would also let South Dakota families keep their kids home without any oversight from school boards.

The bill passed the Senate Education Committee 6-1 and will be debated by the Senate this week. Rohl is in favor of the legislation, while Keintz had concerns.

“For me, it’s all about what is best for kids,” said Rohl. “Home school families pay taxes and I think it’s their right to participate in public school extracurricular activities. We should provide kids with every opportunity that we can, and the family should have the right to decide what goes on with their own child.”

Keintz was troubled by the lack of accountability from home-school families if the bill would pass.

“Now we require homeschool students in grades 4, 8, and 11 to take standardized tests, and this bill would take that away,” said Keintz. “We would have no way to enforce compliance to educational standards. I have a lot of concerns with the bill.”

Britton-Hecla Superintendent Steve Benson attended the cracker barrel and weighed in on the issue.

“This bill would create a double standard for participation in extracurricular activities,” noted Benson. “I’m not against home schooling at all, but under this bill kids in public school would still need to meet academic requirements to participate while home-schooled students would not have to meet any standards. I think we have to have some kind of monitoring system.”

Benson also said that having academic requirements for extracurricular participation also puts an emphasis on education.

“Sports is a huge pull and one of the biggest assets we have to show that education is important,” stressed Benson.

Amendment A, which was passed by voters in November and allows recreational use of marijuana in the state, was also discussed. The amendment was struck down by a Hughes County judge but is expected to be appealed to the South Dakota Supreme Court.

“It’s a crazy situation,” said Rohl. “I supported both Amendment A and Initiated Measure 26 which allows medical marijuana use, and I have also introduced two bills which would take convictions for having marijuana in your system off the public record. I don’t believe we should wreck people’s futures for that offense.

“We need to respect the will of the people, and having another crop could be a very good thing for rural America,” Rohl added. I would hope that South Dakota is in good position to grow and manufacture marijuana products, but it’s an uphill battle.”

Keintz felt that the will of the people should be honored.

“I think the most important thing is that Amendment A is what the people of South Dakota voted for, and we need to respect the process.”

Other discussion topics included merging of the South Dakota Department of Agriculture with the Department of Environment and Natural Resources. Keintz was against the merger because she felt the state’s top two industries of agriculture and tourism each deserve individual attention.

“I think merging the departments will make it easier for big corporate agriculture to do whatever it wants, and only two other states in the country have merged those departments,” Keintz noted.

Also discussed were an open fields law that would limit powers of conservation officers, and concerns about moves to control invitro fertilization.

Prior to the question and answer session, two BrittonHecla students who have served as pages in the state legislature spoke to the crowd of their experiences. Taylor Storbakken served as a Senate page last year and will be serving as a House page in the fourth term this year. McKenna Carlson just fmished serving this year as a House page.

“It was the best experience I’ve ever been a part of,” said Storbakken. “I learned about the legislative process and how to get involved with topics we care about.”

“I would not exchange the experience for anything,” echoed Carlson. “It was amazing and I was so glad to be a part of it.”