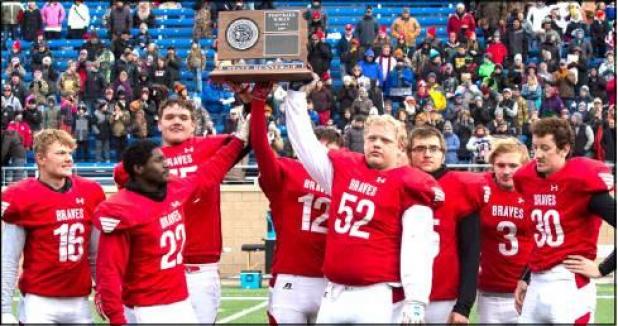 The Britton-Hecla football team came up one win short of its goal of a state championship on Friday, but in the minds of the large group of Braves fans that turned out for the Welcome Home celebration on Sunday their team is a winner.

Canistota-Freeman rallied in the second half to stop the Braves 46-34 in the Class 9A title game to deny the Braves their second state championship in three seasons. But the Braves put together their second straight unbeaten regular season this fall and have lost just three games in the past four years.

This season Coach Pat Renner’s crew also overcame a bunch of adversity, losing senior Christian Kirk to a knee injury in the second game of the season, losing junior Trevor Zuehlke to a llifethreatening head injury the last game of the regular season, and then losing senior Stanley Haskins, Jr., early in the semifinal contest.

Nick Fosness, father of senior Cole Fosness, talked about how the Braves faced their challenges.

“You guys have made so many fans out of so many people. The way you played with one heart you will remember the rest of your lives. And when Trevor comes home another chapter of the book will be told.”

Fosness recounted what the Braves, and specifically this year’s seniors, has accomplished the last four years.

In the past four seasons Britton-Hecla has compiled a 39-5 record. In 25 of those 39 wins opponents scored one touchdown or less and the Braves outscored foes 1,788-544 in those four seasons.

When this year’s seniors were fifth graders a youth football program was started in Britton, and that laid the foundation for future success.

“These guys have played a lot of football together and knew each other on the field,” noted Fosness. “This is the result of all that effort.”

Fosness also noted that 37 kids in grades 3-6 participated in that same youth program this fall, and he referred to the Braves’ football culture being developed at a young age. He asked the youth players in the audience, When is the only time you look down on somebody?’ The answer came quickly – ‘When you help them up.’

“It’s been a heck of a run,” concluded Fosness. “You guys are winners, and you’ve been winners for a long time.”

Senior Levi Boyko represented the players. He made sure that the first thing he did was thank the Moms for all they did behind the scenes to help make the season successful. Secondly, he talked about his team refusing to give up.

“This season we faced a lot of hardships, and I think most teams would have given up. But we didn’t, and we didn’t let those hardships define us. I think that’s really special.”

“The coaching staff set such a good example for us. They wanted us to not only play like good athletes but to act like good men. I was sad to hear when Coach Renner said he was retiring, but I was glad to be coached by him and really appreciate what he’s done for us. It’s amazing.”

Renner was quick to credit his coaching staff for the Braves’ success.

“I don’t know X’s and O’s, but I love football and love kids. I can’t thank these guys (other coaches) enough. There are also not enough thank you notes to thank everybody in this community and the area. Your words got us through this. I share with the boys all the time to go home and give their parents a hug and tell them you love them. If there’s one thing that came from this season it’s to not take a day for granted.”

Renner also hopes he has made a difference for his players through his years of coaching.

“My belief is to prepare our football players to be good men, good husbands, and community leaders,” Renner concluded.

Austin Sasker, who served as emcee for the Welcome Home event, also has put together videos for the team this season and showed a final one on Sunday. He

said he produced the video to show this season’s success was not measured by winning a state championship game, but rather by the love of a community.

Parents of football players put together a presentation that reviewed the Braves season. Each parent held up a sign that detailed the Braves wins and accomplishments, but also described the trials. Their message said in part, ‘You faced injuries, adversity, fear, and heartbreak, but you pulled together as a team, a family, and just kept going stronger, braver, closer to God and one another, and that is what makes you true champions.’