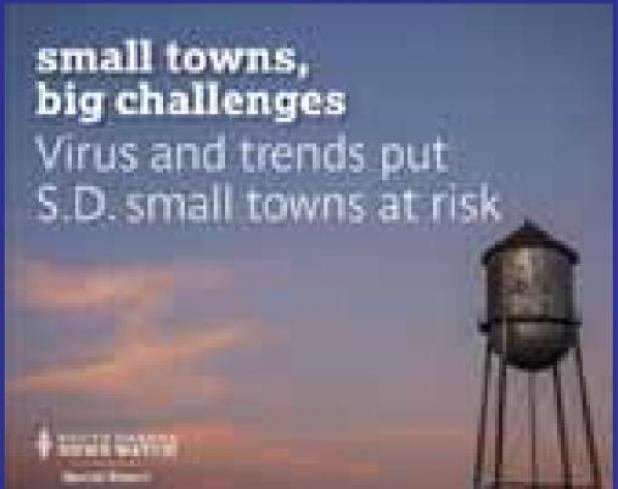 How Are Small Towns Handling Changes?

(Editor’s note: This article is the final piece of a three-part special report by South Dakota News Watch. The “Small Towns, Big Challenges” series was supported in part by a grant from the COVID-19 Local News Relief Fund Grant Program sponsored by Facebook.

Launching a new business during a pandemic and the economic crisis it caused wasn’t exactly on Mindy Charlson’s wish list.

But the 34-year-old Webster, S.D. restaurateur had planned for April 2020 as the time frame to open her new venture, Fresh Thymes, to make and sell take-and-bake meals to order using fresh, locally produced ingredients. Then the coronavirus began spreading across the planet, including in South Dakota, causing an unprecedented economic crisis that upended even the best laid plans of small-town entrepreneurs.

In Charlson’s case, the sudden closure of “non-essential” South Dakota state government functions, such as the Department of Health food service inspection program, meant that her kitchen couldn’t get a legally required health inspection, and Charlson couldn’t open Fresh Thymes without it. She was stuck, out of work and with a lease on a commercial kitchen and a husband suffering from a series of medical issues.

“That was probably the toughest thing,” Charlson said.

The town of Webster sits on the western edge of South Dakota’s portion of the prairie pothole region, one of the most important ecosystems in North America. Over the past 20 years, it has developed as a regional hot spot for fishing in addition to its long-term status as a pheasant and duck hunting destination.

Like many of South Dakota’s small towns, Webster (birthplace of news media icon Tom Brokaw) has seen its population slowly shrink as farms and ranches have consolidated. Between 1980 and 2018, the town’s population declined from 2,417 to 1,762, a loss of around 27%.

But in the mid-1990s, the town established an industrial park and began working to attract manufacturers to the community in an effort to lessen its dependence on agriculture. The industrial park successfully recruited three manufacturers to the area but plateaued because Webster didn’t have enough workers trained in skilled trades such as welding, said Melissa Waldner, executive director of the Webster Area Development Corporation.

To address the workforce shortage, business owners, city leaders and the Webster School District worked together to reinvigorate Webster High School’s Career and Technical Education program, Waldner said. Now the program includes hands-on internships — some of which are paid — as well as in-depth training in the types of skills Webster’s manufacturers need.

The last decade or so has also seen some revival in Webster’s retail landscape, Waldner said. A bevy of boutiques, catering mostly to women, have popped up in the town’s downtown area and have begun to attract shoppers from Aberdeen and Watertown. A couple new shops were set to open in the late spring of 2020 but have delayed opening their doors due to the pandemic.

“We’ve already seen some really good successes, and we feel like we were in a pretty good position when this pandemic showed up,” Waldner said.

Webster also has access to local medical care. The town is home to a Sanford Health medical center with an emergency room. The 25-bed critical access hospital also has a general surgeon and provides pediatric care.

Other business owners were hit by local government action. In Webster, like in many South Dakota small towns, the city council passed an ordinance forcing non-essential businesses, bars and restaurant dining rooms to close on March 25, said Mayor Mike Grosek.

“Everybody handled that super,” he said. “We had cooperation from the bar owners and restaurant owners and a number of individuals that backed the decision that we made.”

The closures were in effect for seven weeks and contributed to a 7.2% decline in city sales tax revenue for the first four months of 2020 compared to 2019, according to the state Department of Revenue.

Times were tough for Jay Pereboom, owner of Pereboom’s Cafe and Boomer’s Outback motel and lodge, when Webster’s ordinance went into effect. Restaurant traffic and tourism had been down for a couple of weeks already as locals and tourists avoided restaurants and travel amid fears of spreading COVID-19.

But part of what has made small towns important pieces of South Dakota’s social, political and economic fabric is the willingness of their residents to step up and support their neighbors when needed. In Webster, the community rallied around its business owners.

“That’s one of the wonderful things about a small town,” said local banker Ellen Hesla. “When something like this happens, everyone takes it pretty seriously. Most of the people in town know each other and so you find a lot of caring individuals reaching out, helping those that need help.” Children from a vacation bible school in Webster, S.D. spent time volunteering to weed gardens around town. Photo: Courtesy of Webster Reporter & Farmer

In one example of community solidarity, the Webster Economic Development Corporation organized a gift card drive from May 7-15. During the drive, every $25 gift card sold was matched dollar for dollar thanks to donors and Webster city government.

“We had six lines and the phones were so busy, folks were getting a busy signal,” said Melissa Waldner, executive director of the Webster Area Economic Development Corporation. “It was just really crazy to see this nice stack of orders that came in to support small businesses during that time.”

Many Webster residents made a conscious effort to get takeout from local restaurants while dining rooms were shuttered, Pereboom said. Still, keeping the cafe’s doors open and its bills paid wasn’t easy.

“We were only open for five hours a day over dinner hours and so even when we had a good turnout, business was still 30% to 40% down,” Pereboom said.

He was one of the 11,000 South Dakota small business owners who received a combined total of $1.37 billion in federally backed Paycheck Protection Program loans, according to the Small Business Administration. The loans were aimed at keeping employees on the job through July.

Webster started reopening on May 1, Grosek said, when restaurant dining rooms were allowed to open at 50% capacity. On June 1, all restrictions were lifted but social distancing guidelines suggested by the federal Centers for Disease Control and Prevention remain in place. By mid-June, Pereboom said business at his cafe was as close to normal as possible given the ongoing pandemic.

Charlson’s Fresh Thymes, meanwhile, was finally able to open in May after state health inspectors performed a virtual inspection using the internet. Every day, Charlson creates a new menu based on what ingredients she was able to source from her local suppliers. Prices range from $8 for a single meal to up to $25 for a family meal that can feed six. Demand has been strong, Charlson said.

“Things have been going well,” she said. “I had a good client base from before so people know me, know my approach and what I’m capable of. And then just the option of being able to come in and grab something instead of being out in public has helped.”

As it turns out, using local suppliers has been a boon to Charlson’s business. The pandemic has disrupted national food supply chains to the point that once-common items such as ground beef or milk have become hard to order and more expensive. Finding everything from vegetables to eggs locally has been pretty easy and inexpensive.

“It’s actually easier for me to get local stuff than it is off the food truck,” Charlson said. “I get lettuce from a farm over by Pierpont, and Melissa (Hesla) has a little farm and that’s where I get some of my produce and I get some of my parents’ farm, too. I kind of knew of my suppliers already. That’s one of the benefits of living in a small town.”

So far, Webster hasn’t permanently lost any businesses due to the pandemic, Grosek said. And the fact that both Pereboom’s and Charlson’s businesses have been able to survive and even thrive is an encouraging sign for Webster’s future.

“I think it’s been proven over time, in Webster anyway, that when unfortunate things happen, whether it be to a family or to the city in general because of a storm or that our electricity is out for a week, people band together,” Grosek said. “Everybody does their best to get through. I think we see that once again here. Everybody understands that there are issues out there, health wise, that are very troubling and can be very traumatic and they are doing everything they can do to hold it together.”