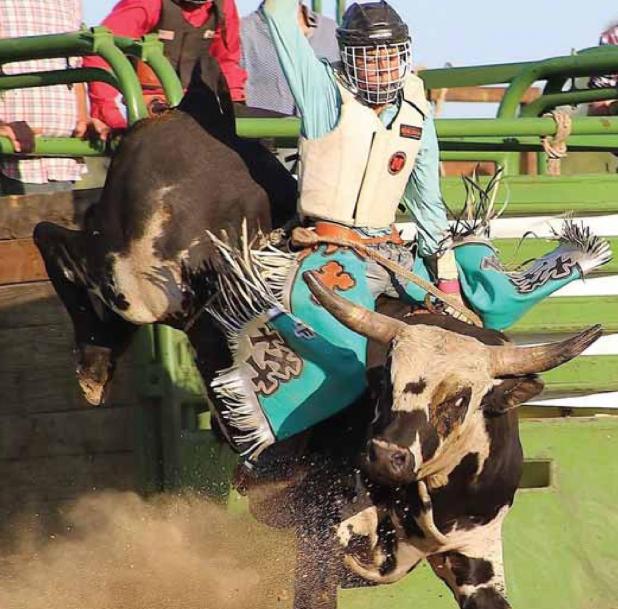 Ty Fagerland, top photo, and Tucker Mertens, bottom photo, will both be competing in the Junior World Bullriding Finals in Fort Worth, TX, this week. The Britton-Hecla students qualified for the event at rodeos this past summer. 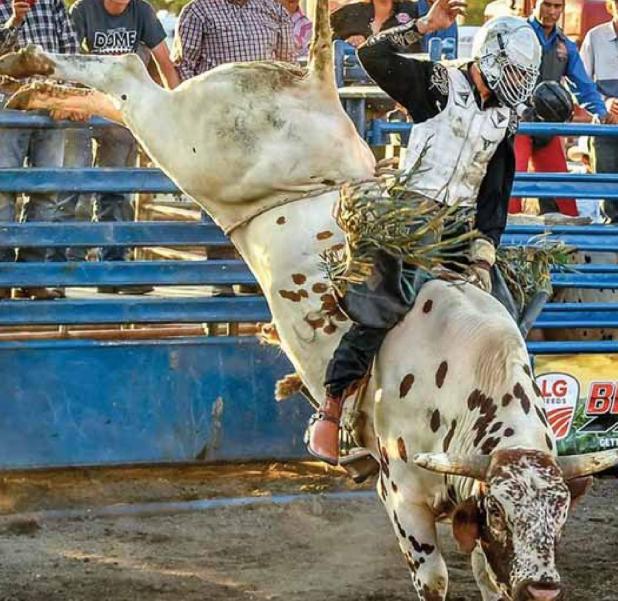 Two area youth earned a trip to Fort Worth, TX, this week for what they hope will be at least 16 seconds on top of a bull.

Tucker Mertens, son of Phillip and Mindy Mertens of Veblen, and Ty Fagerland, son of Kurt and Teri Fagerland of Britton, will be competing in the Junior World Bullriding Finals being held from Thursday through Tuesday at the Cowtown Coliseum in Fort Worth.

The two young cowboys will be competing in the 14-15 age bracket and earned their way to the World Finals by qualifying in rodeos this past summer.

“The World Finals is one of those rodeos every kid wants to be at, and getting there is a pretty good accomplishment,” said Mertens, a sophomore at Britton-Hecla this year. “We get two guaranteed rides, and if we score good enough and get in the top 10 we will advance.”

About 40 youth from around the country will be competing for top honors and a share of $10,000 in prize money. All qualifiers receive a buckle and jacket in recognition of qualifying for the event.

“My goal is just to cover – to stay up on the bull for eight seconds,” said Fagerland, a Britton-Hecla freshman. “I don’t care if I win but just want to cover and do my part of the job to make it worth going down there.”

Rodeo runs in the family for both bullriders.

“My dad used to do it, and he taught me everything I know,” said Mertens. “I’ve been riding calves pretty much my whole life and started competing at age 7.”

Fagerland started riding a horse when he was just three years old, and his family has always been into rodeo.

“We’ve always been a member of the Buckhorn Rodeo Association, and my dad used to fight bulls,” noted Fagerland. “I had always wanted to try it and it was Tucker that got me started when I was 12.”

Teaching others is one of Mertens’ favorite things about rodeo.

“I’ve gotten quite a few people started and have helped quite a few little kids. One of my favorite parts is helping out and being a good role model.” Both young cowboys said rodeo is much more than just trying to stay on top of a bull for eight seconds. “It’s the familyhood around it that I like, and everyone’s got your back,” stressed Mertens. “My focus is to just have fun.”

“You get to meet a lot of great people and make great friendships,” echoed Fagerland. “We may be competing for cash and prizes but also learn about sportsmanship, how to support each other, and how to get up, dust yourself off, and keep on trying.”

Fagerland points to focusing on a bull’s head as a key to a successful ride.

“When that gate is opening I just keep on staring at his head to see where he’s going. Wherever the head goes the whole body is going. And I try to just keep in rhythm with the bull.”

Mertens said he doesn’t think too much about it. much I end up making mistakes. My goal is to just have fun, keep it simple, and let it all fall into place. The most important thing is to stay dedicated and work on it throughout the whole week for it to pay off on the weekend. And on the ride you need to stay in control and keep it flashy while still doing your job.”

But those bulls can be unpredictable and both riders have suffered their share of bumps and bruises. Fagerland bruised his intestines this summer and spent over three hours in the emergency room. Mertens broke his arm last year and strained some leg muscles, but has remained healthy this season despite competing in about 50 rodeos across North and South Dakota.

Mertens has aspirations of riding bulls professionally once he turns 18, and he is hoping for a top 10 finish in Fort Worth.

“Everybody there has talent. It just depends who puts themselves in great position at the right time,” stressed Mertens.

For Fagerland the Texas event will likely be his last hurrah on bulls. He plans to focus on roping during the next rodeo season.

“I kind of want to take up roping and team rope with my dad, so this is probably my last year of bullriding,” said Fagerland. “I’ve also been training colts.”

But for right now both boys are focused on the World Finals, and both agree that the adrenalin rush while sitting on a bull in the chute is what they enjoy most.

“The biggest thrill for me is sitting in the chute and hearing your name get called,” concluded Fagerland.

“It’s definitely the adrenalin that gets you going,” echoed Mertens.

“The World Finals is one of those rodeos every kid wants to be at, and getting there is a pretty good accomplishment.”