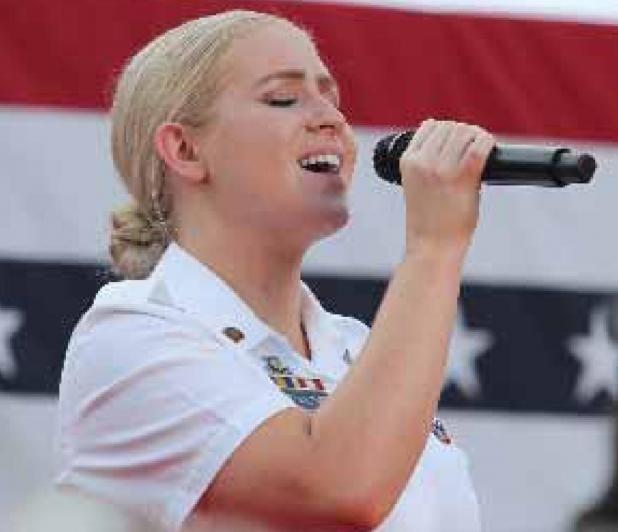 Katie (Wegleitner) Cramer, a Britton-Hecla graduate and the daughter of Dan and Cathy Wegleitner of Lake City, helped create an event this fall that brought much-needed care and assistance to more than 100 homeless individuals in Wisconsin. In this photo she performed for President Trump with the 147th Army Band during the state of South Dakota’s “Salute to America” celebration at Mount Rushmore last summer. (Photo by Sgt. Fiona Berndt)

Wed, 12/23/2020 - 12:00am
Elissa Dickey Northern State University (editor’s Note: Katie (wegleitner) Cramer Is A Graduate Of Britton-hecla High School And The Daughter Of Dan And Cathy Wegleitner Of Lake City).

This fall, a Northern State University alumna helped create an event that brought much-needed care and assistance to more than 100 homeless individuals in Wisconsin.

Katie Cramer organized Hearts in the Park, held Sept. 1 in La Crosse, WI, Cramer, a registered nurse, said the event came about due to the fact that this year has been difficult for everyone, but especially those without a home.

“Together, we brought food, love, medical aid, and so much more to over 100 hearts living in our park communities,” said Cramer, a 2016 NSU School of Fine Arts graduate.

Originally from Lake City, Cramer first began working in health care as a nursing assistant at Aberdeen’s Bethesda Nursing Home. She then completed the NSU-SDSU Accelerated Nursing Program, and has been an RN for just over two years.

Cramer started her nursing career working on a medical-surgical behavioral health unit. Then, she volunteered to work on the COV1D-19 unit for about six months. Now, she works in the intensive care unit at Gundersen Medical Center in La Crosse.

Inspired by Her Mother’s Example

Cramer saw a need for an event like Hearts in the Park from working on a unit caring for this underserved population. But she was also inspired by her mother’s history of helping others.

“Growing up, my mom inspired me to get involved with local charities through the Marshall County Relay for Life, American Cancer Society Fundraisers,” she said. “I’ve watched her lead and be a part of many giving organizations for over two decades, and I want to continue her legacy across the Midwest.”

“I still continue to travel to South Dakota once a month to serve my state and hope to do another 10 years doing what I love, giving back to veterans and their families,” she said.

Active on Campus at Northern

During her time at Northern, Cramer was active on campus, including serving in Student Government Association as Senator of Fine Arts; Cheerleading; Symphonic Band; Marching Band; Jazz Band; Chamber Choir; Jazz Choir; Concert Choir; many other ensembles; and participating in every theatrical production and show her schedule would allow, both at ACT and NSU. She was also an RA for a year, topping it all off with a tremendous senior recital.

For Cramer, the best parts of Northern were the people and the opportunities.

“I would not be where I am today if it were not for all of the professors who pushed me out of my comfort zone and encouraged me to reach farther,” she said. “I am so thankful for all of the help and support I’ve had along the way.”

She’s also thankful for everyone who inspired her to give back.

“Northern State University, SDSU and my hometown not only supported me and set me up for success, they inspired me to want to give back to all of the communities who helped me get to where I am today,” Cramer said. “I am so grateful for everything, and I feel so inspired to keep the `giving back’ momentum going to lift others.”