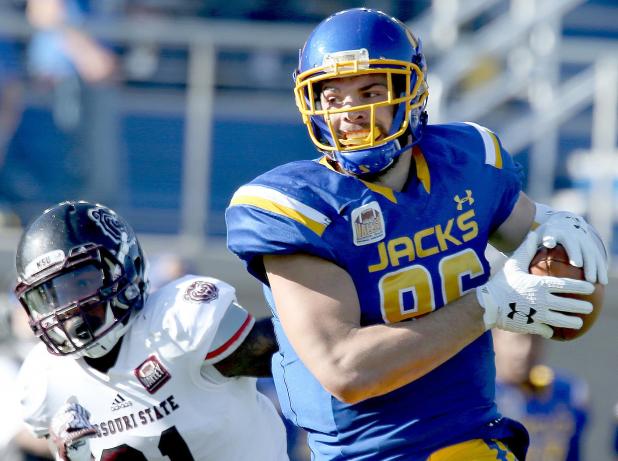 B-H Grad Has Eye On NFL

Britton native Dallas Goedert has his eyes set on playing in the National Football League, but he wouldn’t mind winning a national championship first.

Those are pretty high goals for someone whose favorite sport in high school was basketball. But after being named to six first team All-American football squads since his junior collegiate season at South Dakota State University wrapped up last month, many feel those goals are very realistic.

“His playmaking is phenomenal and his athletic ability, which is still developing, is really special for his size and position,” said SDSU Coach John Stiegelmeier. “Dallas is also a very positive, hard-working guy, just what you want out of a student-athlete.”

Goedert is hoping he gets an opportunity to play at the next level.

“My goal is to play in the NFL, and I think I have a really good opportunity,” said the 2012 Britton-Hecla grad. “I kind of set myself up well this season and am moving up in the draft stock. But I’m trying not to think about it. I’m planning on coming back next year and give it everything I’ve got to try and win a national championship with the team. I’ll worry about the NFL after the 2017 season is over.”

Goedert, a 6-5, 250-pound tight end, put together some eye-popping statistics for the Jacks this past season. He had 92 catches for 1,293 yards and 11 touchdowns. Those 92 receptions were a new SDSU record and were by far the most by any tight end in the country among FCS schools. Ross Dwelley of San Diego was second with 70 catches for 843 yards. But the Britton-Hecla product wasn’t one of those prep athletes pegged as a surefire collegiate star. In fact, Stieglemeier admitted that he wasn’t dazzled by Goedert’s high school performances. “The football film I watched from high school really didn’t shine. And when I came up to watch a basketball game I didn’t see, at that point, the competitive spirit.”

But Stiegelmeier was impressed by Goedert’s “pure athletic ability.”

“He had some untapped potential based on playing a number of sports and maybe not spending time in the weight room like a guy from Sioux Falls or Minneapolis might do. He had great ability with great potential to add on.”

When Goedert spoke at the Britton-Hecla athletic banquet last spring he admitted he didn’t apply himself as he wishes he would have in high school.

“I really didn’t lift weights in high school. I was good enough to be able to play whether I lifted or not, and was not really motivated.”

Goedert’s favorite sport was actually basketball, but his senior year schools began expressing interest in him as a football player. He just about decided to go to Northern State University where he had been offered a football scholarship.

“I was really close to going to Northern, but one day I woke up and texted Coach Stig that I would go to SDSU. I just decided I wanted to play at the highest level I could.” It was a good match from day one.

“The second I walked into the lockerroom and put the pads on I felt welcome,” noted Goedert. “That first day there was just one other guy in there – kind of a nerdy-looking dude wearing classes and a beard. Come to find out it was Zach Zenner (who now plays for the Detroit Lions), who was a junior at the time and an All-American, and for him to take time to talk to me was cool.”

Goedert walked on his freshman year and was redshirted. After his first year of eligibility he was given a 20 percent scholarship, after being named All-Missouri Valley Conference in his sophomore season he earned a 70 percent scholarship, and after being named to six All-American teams this year he smiled when asked if he might get a full ride for his final season in the gold and blue.

That progression came about through a whole lot of hard work and dedication. The high school 200-pounder now tips the scales at 250 pounds and holds school records for weightlifting.

“You don’t become the physical specimen that he has developed into up to this point without working extremely hard. I think he internally made a decision that everybody can do – to say I want to be great – and he’s done it. It’s all on his shoulders.

“And he’s not content,” stressed the SDSU coach. “The higher you go athletically the harder it is to take the next step – to get a little faster, a little more agile, or jump a little higher. He’s pushing himself to become a more elite athlete, and that’s a special characteristic – that desire to be great and to be great every day.”

“That catch was kind of a dream come true,” said Goedert. “I watched SportsCenter as a kid, and getting on ESPN was really cool.”

But despite all of his personal accolades, Goedert is really all about the team.

“We’re really just a big group of brothers that enjoy spending time together, and we know that we can’t have anybody playing for themselves. It doesn’t matter who has the success, it’s all about the team.”

Goedert has developed quite a local fan club. While home for Christmas break he obliged some fans with autographs, and an average of 50- 60 Britton area fans attended home games. That support wasn’t lost on the Jacks’ standout.

“My family does a great job of supporting me, and always has, and I was able to talk to a lot of the Britton fans after the games and take pictures. I appreciate it a lot and it’s pretty awesome.”

Goedert was also quick to credit his coaches.

“The coaches are really my role models. Their work ethic and how much they care about each individual student is really unbelievable. And Coach Stig really focuses on academics and is there to make us better men. He also focuses a lot on Christianity and God. He doesn’t push it on us but talks about it a lot.”

Goedert hopes to take a bigger leadership role for his team during his senior season.

“I look forward to being a bigger leader and doing the right things. I think a lot of guys look up to me because of what I’ve done on the field, but it’s just as important to have a positive attitude that will relay to the rest of the guys. That’s also kind of what the NFL scouts are looking for – someone who always is doing the right thing.”

With just one full-time offensive starter graduating this spring, the Jacks are looking to once again be an explosive team with Goedert a key cog in the attack.

“Some of the plays he’s made have kind of surprised everybody, maybe even himself,” said Stiegelmeier. “Knowing his ability, our offense sets out to utilize him every way we can and literally every week we tried to find another unique way to get the ball in his hands.”

But most of all Goedert’s coach is proud of the decision the Jackrabbit star made to make the most of his Godgiven ability.

“I’m tremendously proud of what he’s done,” Stiegelmeier concluded. “He is maximizing the gifts that God gave him, and not a lot of us can say we’ve done that. I’m really proud of him.”