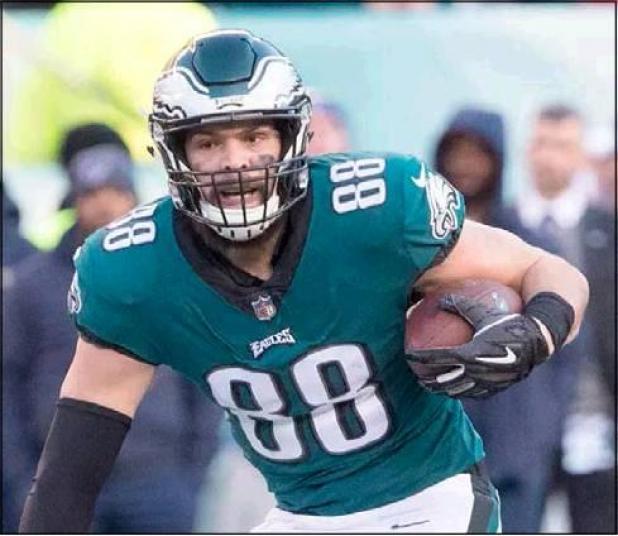 Britton native Dallas Goedert began fall camp with the Philadelphia Eagles today (Wednesday) in preparation for his second year in the NFL.

Expectations are high for Britton native Dallas Goedert and his Philadelphia Eagles teammates as they prepare for the 2019-20 NFL season.

The Eagles report for camp today (Wednesday) and have their first preseason game on Aug. 8.

The Britton-Hecla and South Dakota State University graduate, is set to begin his second year with the Eagles after being their top draft pick a year ago, and he has been tagged as one of the most improved players on the Eagles roster.

“We have really big expectations,” said Goedert as he was preparing to fly back to Philadelphia for the beginning of fall camp last week. “Looking at the team you don’t see a lot of holes. With the players we signed and drafted I like our odds. As long as we stay healthy we should have a chance at making a deep run in the playoffs and obviously our goal is to win another Super Bowl.”

Goedert said the team added a couple of interior guys on the defensive line that should firm that up line play and help the pass rush. DeSean Jackson, the all-time NFL leader in touchdown receptions over 60 yards, was obtained in a trade with Tampa Bay, runningback Jordan Howard came to the Eagles from the Bears after running for 935 yards a year ago, and Miles Sanders, a runningback from Penn State, was drafted.

“Jackson is a big playmaker that can stretch the field, and our core of runningbacks got better with Sanders and Howard,” said Goedert. “I think those guys have the potential to do big things.”

The Eagles won the Super Bowl Championship two years ago but fell to a 9-7 mark a year ago, winning a firstround playoff game before being eliminated by the New Orleans Saints. Goedert had a strong rookie season from his tight end slot, catching 33 passes for 334 yards and four touchdowns, plus another score in the playoffs. Eagles’ coaches have said that they expect Goedert to play a bigger role this season.

Goedert plays behind All-Pro tight end Zach Ertz who caught 116 passes last year, the most in NFL history by a tight end. But the Eagles are working on ways to get both tight ends on the field at the same time.

“Coaches were really pleased with me this spring and I’m expecting my time on the field to increase,” said Goedert. “We were testing quite a few things out in spring practices to try and get both Zach and I on the field and both involved. We’ve put in a few more packages in the Red Zone, and hopefully with our big bodies we can score a lot of TD’s this year.”

“As a team we want to win the division and go all the way to the Super Bowl. We do have high expectations, and I think I can help the team achieve them.”
----Dallas Goedert

Looking back on his rookie season, Goedert felt he learned a lot.

“Last season definitely met my expectations and probably exceeded them a little bit. It was a really good learning experience. I got to do a lot and feel my game grew as the season went on.

“One of the biggest lessons I learned is that everybody in the NFL is good, everybody at every level is an elite player. If you take a play off you are going to be exposed and you really have to give it your all – in practice and in games.”

“One of the things I wanted to do in the offseason was to get a little bit faster,” noted Goedert. “You can never be fast enough in this league, and three other players and I spent two months with a trainer in Irvine, CA, the same place where I prepared for the NFL combine last year. We did a lot of speed work and worked on running form. When I got back to camp this spring, everybody said I looked faster, so I think it worked well.

“In spring practices, I was blocking really well, making lots of plays in the passing game, and I didn’t make too many mistakes. I’m also more confident and more comfortable with the playbook. Because of that I didn’t have to think as much and could use my natural instinct and ability to just go out there and have fun. That allowed me to play fast and make more plays.”

Goedert heads into the 2019-20 campaign with a different mindset.

“The first year I didn’t know what to expect. Now I know what it’s like and what the coaches expect, and I already have friends on the team and have a different mental approach. I’m probably more excited for the second year from that aspect.”

Goedert is also excited for a couple of early-season matchups. The Eagles play at Green Bay on Sept. 26 and at Minnesota on Oct. 13.

“Being a Packers fan growing up, it’s like a dream come true to get to play at Lambeau Field on a Thursday night and go up against Aaron Rogers. I’m excited for that one. We’re also playing in Minnesota this year and a lot of family and friends will be there, so that will be a really fun one, as well.”

Goedert’s primary focus is to establish himself this season as a solid NFL player.

“My personal goal is to establish myself as a good enough tight end so that Zach and I are not one and two on the depth chart but 1 and 1A. If I could double my catches, yards, and touchdowns this season, that would be a pretty good year.” Goedert is quick to point out that the team is the priority.

“As a team we want to win the division and go all the way to the Super Bowl. We do have high expectations, and I think I can help the team achieve them.”