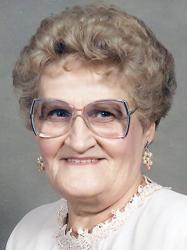 Violet Smedstad, of Britton and formerly of Webster, passed away from her earthly home and to her heavenly home on Tuesday, November 15, 2016, at Marshall County Healthcare Center in Britton six days short of her 95th birthday, at the age of 94 years, 11 months and 25 days.

Her funeral was held on Saturday, November 19, at Falnes Lutheran Church near Langford; Rev. Terrill Sorensen officiated. Burial was in the church cemetery.

Violet Jensen was born on November 21, 1921, to Henry and Anna (Rindahl) Jensen on a farm near Roslyn. She was baptized and confirmed at Fron Lutheran Church. She attended one room country schools in the Roslyn and Langford area, graduating from Langford High School in 1939. After graduation, she began working at the Triple A office at the Day County Courthouse in Webster.

On March 24, 1940, she was united in marriage to Marvin Jondahl at Fron Lutheran Church near Roslyn. The early years of her marriage were saddened by the death of their first three children. Their only son, Gary was stillborn on September 27, 1941; Linda Rae was born on February 11, 1945 and died on December 16, 1945 at 10 months of age; and Diane Lynn was born on May 6, 1947 and died on November 28, 1948 at 18 months of age. Marvin and Vi were blessed with three more daughters, Lana, Sherry and Kathy. When the girls were 2, 6 and 8 years old, Marvin passed away on May 23, 1958, after a brief illness, he was 45. Violet and her three daughters moved to Langford and then to Britton where Vi was employed at the Britton Hospital and later at Britton clinic.

In 1964, she married Bob Benda, a widower with four children, Beverly, Larry, Tony and Debbie. (Beverly was married and baby Debbie was 3). Just like that there were 7! Those were busy, but happy days; and somehow Bob and Vi found time to go dancing, which they both dearly loved. The old-time waltz’s and polkas were their favorites. They also became involved in square dancing and clogging! They were also blessed with another daughter in 1967, when Joanie came to live with them. In 1970, the family moved to St. James, MN. In 1976 they were saddened by the death of their oldest son, Larry at the age of 29 years.

Vi worked as a waitress at the Holiday Inn in North Mankato for several years until she became an associate for AFLAC insurance. Vi dearly loved her job helping people. She continued working for AFLAC until her retirement at age 85, due to some health issues. Bob and Vi celebrated their 25th wedding anniversary in 1989 and for years later. Bob passed away after a short battle with cancer. Vi continued to live in St. James and kept very busy taking care of her AFLAC clients.

Later, an old friend from country grade school days came back into her life. On November 4, 1995, she married Orlin Smedstad. They were married eight and a half wonderful and happy years. They enjoyed traveling and wintering in Oregon and spending summers in St. James. In May 2004 Orlin passed away from complications following by-pass surgery in Rochester, MN. In 2007 Vi moved to Heritage Village in Webster.

Vi dearly loved her wonderful blended family and her deep abiding faith to the Lord. He was her constant source of strength throughout her life. She cherished her work with AFLAC. She also enjoyed cooking, baking, reading, gardening and making lefsa! Her family loved to come home to Mom’s house for chicken dinners.

She was preceded in death by those previously mentioned as well as her parents; three husbands; four children; a son-in-law, Dennis Kilker; her twin sister, Viola Berget; and brothers, Mernie, Arden, Bob, Paul, and Dennis Jensen.

Fiksdal Funeral Service of Webster was in charge of the arrangements. Fiksdalfuneral.com.