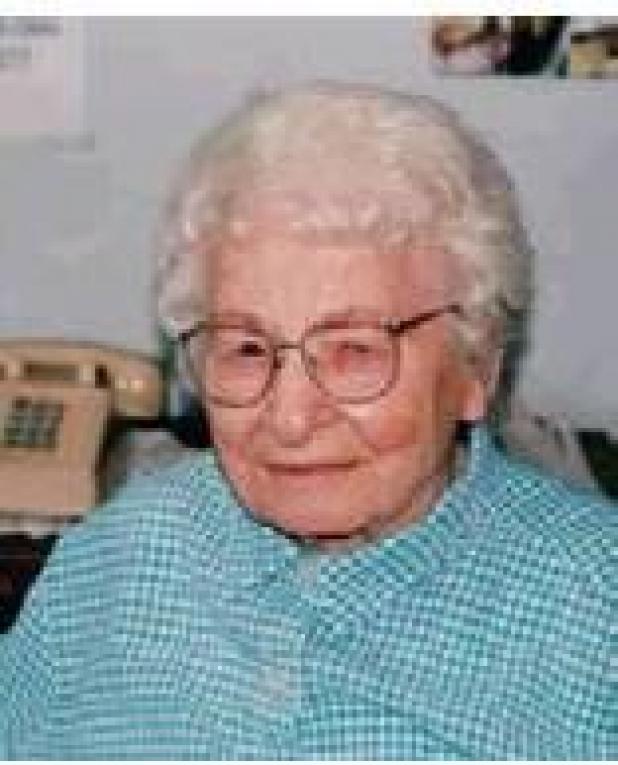 Theresa passed away on Monday, September 2, 2019, at Wheatcrest Hills in Britton just 26 days shy of her 108th birthday.

Theresa Marie Eckhardt was born on September 28, 1911, to George and Amalia (Becker) Eckhardt in Otis, KS. Her parents immigrated from Brunnental, Russia, and Theresa was born four months after they arrived. As an infant her family moved to the Fergus Falls, MN, area and that is where she attended her schooling.

On February 18, 1934, she was united in marriage with Mathias Bernard at St. Phillips Catholic Church in Hankinson, ND. They made their first home in Tinta, MN, where they started their family and her husband farmed. Later they moved to a farm near Havana, ND.

In 1944 they moved to Britton where her husband started working with Clark Lamport. Mathias passed away on October 1, 1972, and Theresa continued to make her home in Britton. She helped families with home health care and for many years served as a housekeeper for William H. Morgan. She also greatly enjoyed her work at the Coffee Bar.

She was a member of the St. John de Britto Catholic Church in Britton and also belonged to the Altar Society. Theresa loved flowers and gardening. Even until her late 90’s, she was still mowing her own lawn with a push mower! She enjoyed canning, knitting, crocheting, and sewing. She was an excellent cook and baker and will be remembered for her homemade buns and lemon meringue pies. The last years of her life were spent at Spruce Court and Wheatcrest of Britton.

She is preceded in death by her parents; one son, Roger; and eleven siblings.