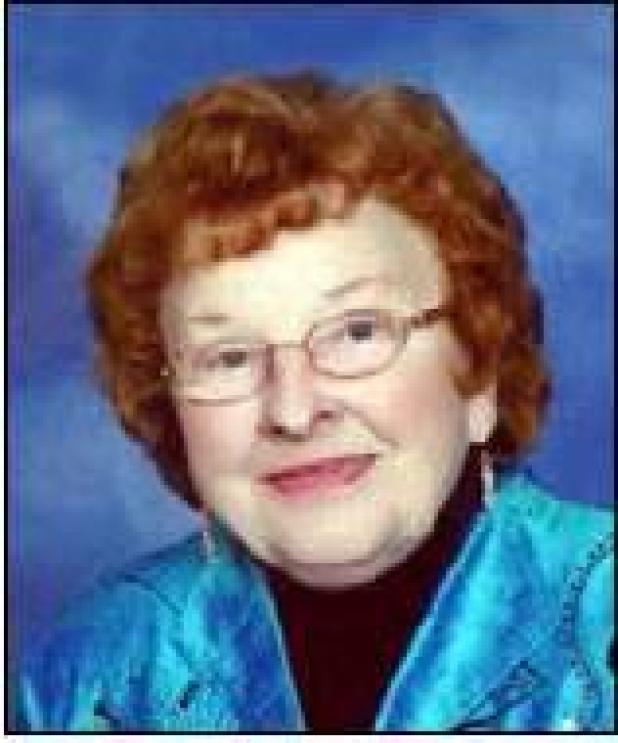 Nancy’s funeral was held on Monday, September 16, at Nazareth Lutheran Church in Cogswell. Burial was at Old Sargent Cemetery near Cogswell.

Nancy was the daughter of immigrants, William and Inga (Nelson) Anderson and born at their home in Verner Township near Cogswell on August 29, 1926. She and her sister, Nellie, were born identical twins. Being a twin had a lifelong impact on Nancy. She also had an older brother, Carl, and together they all walked to attend country school.

Nancy graduated from Cogswell High School in 1944. Following high school, she briefly worked at the college cafeteria in Wahpeton. Later she acquired an emergency Teaching Certificate at the Ellendale Normal Industrial College. Following certification she taught for one year in a one room country school located in Bowen Township near Cogswell.

It was at this time that she met a handsome young man, Harold K. Mathews, who had just become a new farm neighbor one mile away from her family farm. They dated for about two years. Interestingly, her twin sister, Nellie, began dating Harold’s brother, Theodore (Ted), at the same time.

Who would have predicted it; but on June 8, 1947, twin sisters Nancy and Nellie married brothers, Harold and Ted in a candlelit double ceremony. Following a joint Black Hills / Yellowstone honeymoon, these newly wedded couples returned to the Mathews farm. Nancy and Harold, and Nellie and Ted, entered into a farm partnership called “Mathews Brothers”. The two couples shared a home for a period of time with Harold and Ted’s parents. Later, each family established its own home and there became two houses on the same farm. Their farming partnership, Mathews Brothers, grew to include annual registered polled Hereford production sales along with typical regional grains.

Nancy and Harold had three children which they loved and were proud of; Janet, Diana and Paul. Nancy’s life was greatly altered by her husband Harold’s death in 1970. He was only 45 and Nancy was 44. She, however, continued her farm partnership role until her retirement.

Upon retirement, Nancy began to dedicate much of her time to the service to others focusing on her baptismal church, Nazareth Lutheran of Cogswell. She was always very active in church circle and also in previous years was active in teaching Sunday School. Nancy organized and implemented the first church “prayer chain.” She was depended upon to organize church activities such as World Day of Prayer and church dinners.

Nancy was constantly visiting friends and church members who were hospitalized or living in nursing homes. Nancy also devoted much time and energy to being an advisor to the Happy Hour 4-H Club. She was actively involved and served in various roles in the following groups: the NightingaleHomemakersClub, Dickey-Sargent Cowbells, Sargent County Farm Bureau, District #26 Republican Party, Sargent County Fair Board, Jackson Precinct Election Board, Census Taker and Good Samaritan Society (Oakes) Advisory Board.

She initiated the Sargent Manor (now called Four Seasons) “Friends Program”. This program coordinated volunteer hair care for nursing home residents. Nancy knew that if one felt good about their personal appearance, it improved one’s sense of well-being. This program received state recognition for its role in improving residents’ satisfaction with care.

On June 27, 1981, Nancy’s life was once again dramatically changed by her twin sister Nellie’s death at the age of

54. Nancy and Nellie had lived side by side for their entire life. Again, she turned to her role of service with near daily visitations to hospital and nursing homes until February 2013. At this time, Nancy herself entered assisted living and eventually moved to the Four Seasons Nursing Home in October 2016.

Nancy was known for her baking skills. Her family is grateful that she passed on the skill to make “Nee Nee” buns, lefse and to some in the church for baked donuts. She loved music, and assured that her children and grandchildren were schooled in its basics so should they desire to advance in that direction they were prepared.

Nancy is survived by her children, Janet Feder of Fargo, ND, Diana (Gerald) Bosse and Paul (Tammy) Mathews both of Cogswell; three grandchildren, Brent (Lindsay) Bosse of Britton, Mathew (Casey) Bosse of Cogswell, and Elijah Mathews of Bellefonte, PA; four great-grandchildren. She is also survived by her two special nieces, the daughters of twin sister Nellie and Harold’s brother, Ted, who grew up on the same farm site; Ramona (Dwight) Krapp of Cincinnati, OH, and Phyllis (Daniel) Delahoyde of Cogswell and their children. Phyllis and Dan still reside on that common farm site where all the Mathews children had the unique opportunity of growing up having, as they said, with sort of “two Moms and two Dads.”

Nancy was preceded in death by her parents William and Inga; sister, Nellie; brother, Carl; her husband, Harold; and her son-in-law, Robert Feder.