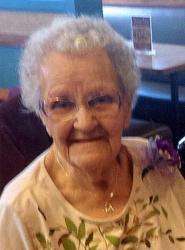 Interment was in Hills of Rest Cemetery, Sioux Falls.

Myrna Joy Warwick was born on May 10, 1930, in rural Marshall County South Dakota to John and Jennie (Gunderson) Warwick. She was raised and received her education in Britton. Myrna then continued her education earning a teaching certificate at General Beadle College in Madison.

She was united in marriage with Gene L. Blue on June 28, 1952, in Luverne, MN. The couple made their home in Sioux Falls and were blessed with six children. Myrna was a member of Messiah New Hope Lutheran Church in Sioux Falls and her “Birthday Club.”

Myrna loved spending time with her family and friends; especially her grandchildren. In her younger years she enjoyed sewing, waitressing at many local cafes, and her work at the dry cleaners.

She is preceded in death by her parents, John and Jennie Warwick; husband, Gene L. Blue in 2000; five brothers, Edgar, Norine, Isley, James, and Terence Warwick; and one sister, Muriel Todd.