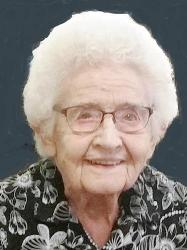 She attended school in Claremont and graduated from Claremont High School. She attended Northern State College and received a teaching certificate. She taught for several years in rural schools in the Hecla area.

In 1943 Mildred married Leonard Herther and moved to the Herther farm in rural Hecla. They attended Peace Lutheran Church and sang duets locally for many years. Mil was active in LWML, Study Club, Hecla school board, and Brown County FCE and was a life member of PTA. Hobbies included sewing, quilting and writing poetry. In 1971, Len and Mil volunteered to work in the Lutheran Mission in Heldsbach, New Guinea, where Mil taught math, business, and English.

After Len’s death in 1998, Mil spent winters in Arizona near family. In 2003, the homestead was sold and Mil became a permanent Arizona resident. Mil then began painting, computer training, genealogy, and volunteering at the VA Hospital in Phoenix.

She was preceded in death by her husband Leonard Herther.