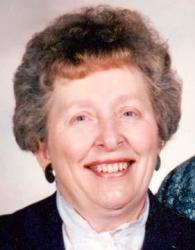 The funeral for Mary Nelson was held on Monday, March 27, at the Rose Hill Evangelical Free Church of rural Langford. Pastor Mike Honl officiated and interment was in the church cemetery. Mary passed away on Thursday, March 23, 2017, at Sun Dial Manor in Bristol at the age of 84. Mary Ann Hagen was born on April 12, 1932, in Britton, SD, to Albert and Mable Irene (Erickson) Hagen. As a youngster, she grew up on the family farm near Lake City and attended rural Marshall County schools. She then attended Britton High School where she graduated as Valedictorian in 1949. Mary continued her education at Presentation College in Aberdeen, and became a Registered Nurse in 1952. After graduation, she worked at St. Luke’s Hospital in Aberdeen. On October 9, 1954, she was united in marriage with Elwood Robert Nelson at Rose Hill Evangelical Free Church. They made their home on a farm near Britton where they farmed and raised their family. Elwood passed away on August 1, 1998, and Mary continued to live on the farm until moving into Britton. She became a resident of Sun Dial Manor in Bristol in September of 2012. Mary was a faithful member of Rose Hill Evangelical Free Church of rural Langford. She had served as a Sunday School teacher, was a youth leader and had been active in the FCWM. Mary also belonged to the American Legion Auxiliary, had served as a volunteer at Sun Dial Manor, and in her later years had a lot of fun with her Red Hat Society group. Her hands were always busy with sewing or quilting, and she was an avid reader. Mary and Elwood loved to travel together, and especially enjoyed their trips to Washington state and Alaska where they could visit and dote on their grandchildren. Grateful for having shared her life are her five children, Daryl Nelson of Britton, Rodney Nelson of Eden, Connie (Dave) Johnson of Fairbanks, AK, Barbara (Greg) Thomas of Kennewick, WA, and Joel Nelson of Waldport, OR; her five grandchildren, Stephanie (Scott) Gross, Melissa Hall, Melia Thomas, Katie (Jake) Busack, and Bryan Thomas; two great-grandchildren; her sister, Maxine Spears of Boise, ID; and a sister-in-law, Midge Hagen of Cedaredge, CO. Preceding her in death were her parents; her husband; a brother, Earl Hagen; and a brother-in-law, Claude Spears. Condolences may be directed to the family in care of Rodney Nelson, P. O. Box 125, Eden, SD 57232. An online guestbook and obituary are available at www.pricefuneralchapel.net.