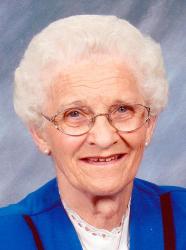 The funeral for MaeBell A. Didreckson was held on Saturday, November 19, at the First Lutheran Church in Britton. Rev. Terrill Sorensen officiated and interment was in the Britton Cemetery.

MaeBell passed away on Tuesday, November 15, 2016, at Wheatcrest Hills in Britton at the age of 93.

MaeBell Agnes Sukut was born on December 15, 1922, at Bismarck, ND, to Dan and Carolina (Buck) Sukut. She grew up on a farm near Lehr, ND, with her siblings, Albert, Betty, Sylvia, Raymond, and Alvin. During the Great Depression, she moved with her family to the west coast and lived in the Washington and Oregon areas to work in the fruit orchards.

The family eventually returned to the Midwest. MaeBell attended an Assembly of God church where she was baptized in White Lake, SD. They later moved to the Amherst area, where MaeBell completed her education.

In 1941, she met Oscar Oliver Didreckson while he was driving for a threshing crew. They were married on March 6, 1944, at the First Lutheran Church parsonage in Britton. They made their home on a farm near Amherst. To this union, two sons were born: Dennis Keith Didreckson, and 13 years later Kent Lee Didreckson. In 1951 they moved to a farmstead near Britton.

MaeBell was a true farm wife, not only raising chickens, but also helping in many of the aspects of farm life. Her faith was very important to her. She had served as a Sunday school teacher, helped with Vacation Bible School, and was a part of the ladies group at First Lutheran Church. She also belonged to the Rebekah Lodge and held various offices over the years. She did a lot of baking and will be remembered for her amazing butter horn rolls and fresh pies. She always had a tub of cookies in her freezer for little visitors who dropped by her house.

Above all else, MaeBell truly loved her family, her grandchildren, and adored her great-grandchildren. She was the epitome of self-discipline and logged many miles walking country roads and in later years riding her exercise bike. She was a strong woman of great faith. She loved her Lord and her Bible time. She referred to Jesus as her best friend, and truly meant it. - “Precious in the sight of the Lord is the death of his saints. – Ps. 116:15

Preceding her in death were her parents, her siblings, and her husband, Oscar, on August 12, 2001.

Condolences may be directed to the family in care of Dennis Didreckson, 42654 108th Street, Britton, SD 57430 or Kent Didreckson, 1822 West River Drive West, Stevens Point, WI 54481. An online guestbook and obituary are available at www.pricefuneralchapel.net.