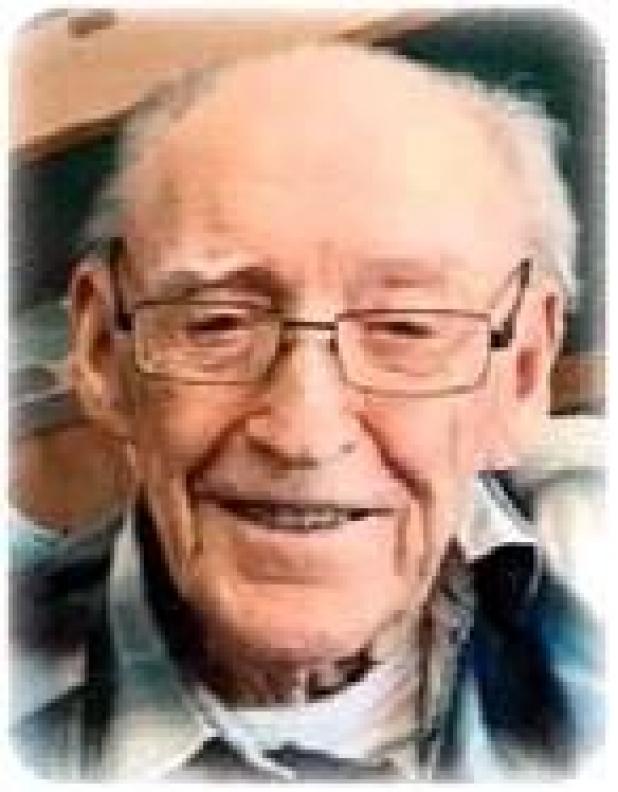 The Mass of Christian Burial for Lambert Knebel will be held at 10:30 a.m. on Thursday, May 23, at Sacred Heart Catholic Church in Eden, SD, with Fr. Brian Simon and Fr. Albert Cizewski officiating. Interment will be in St. Michael Cemetery of Eden.

Visitation will be 5:00-7:00 p.m. on Wednesday, May 22, at the church, concluding with a 7:00 p.m. vigil service. His arrangements have been entrusted to the Price Funeral Chapel of Britton.

Lambert Leo Knebel was born on June 17, 1917, to Paul and Hattie (Fink) Knebel on a farm near Roslyn, SD. He attended country grade school at Nutley Township School #164. He helped on the family farm and also helped at his brothers’ and sisters’ farms. He spent some time in Oregon working with his uncles, aunts, and cousins.

On September 20, 1938, he married Lucille Schlekewy at Sacred Heart Catholic Church in Eden. The couple lived and farmed the Schlekewy farm near Eden, which they purchased from Lucille’s father, John Schlekewy. On October 4, 1976, the couple retired from farming and moved into Eden. Lambert then drove the delivery van for Dakota for five years. In 1977 the couple built a new home in the south end of Eden.

Lambert and Lucille went on many trips during their retirement years. They took bus tours to the east coast, Florida, and Nashville. They also traveled to Canada, Oregon, North Dakota, Texas, Oklahoma, Kansas, and Minnesota visiting relatives.

He was a member of Sacred Heart Catholic Church, the Catholic Order of Foresters since 1938, had served as a school board member for 20 years for the Eden District, and belonged to the Eden Lions Club. For many years he collected cans to raise money for the Lions. He was awarded the Good Neighbor Award in 1989, the Melvin Jones Award from Lions Club, and the Friends of Pheasants Award from Lake Region Pheasant Restoration.

Lambert always said the secret to a long life is to keep active. While living in the assisted living centers Lambert would walk around the town, meeting new people and visiting with friends, and even walking the ten blocks to Mary’s house in Britton. While living in Roslyn, he would walk over to his son Gary’s house or stop by and see what grandson, Adam, was up to. In the past few years, he would limit his walk to around the block stopping at a chair along the way for a rest.

He enjoyed fishing, hunting, playing cards, working in his yard, tinkering in his shop and visiting with neighbors and friends.

In September 2013, Lambert and Lucille celebrated their 75th wedding anniversary with an open house party at the parish hall in Eden. During the Eden Centennial Celebration, Lambert and Lucille were honored as the “Oldest Married Couple” and led the parade as Parade Marshalls. The weekend of Lambert’s 100th birthday he rode in the Roslyn Vinegar Parade in a 1917 Model T. Later it became a tradition to take a ride in several more parades in the Model T.

Lambert celebrated his 100th and 101st birthdays at the Knebel Farm with many family members and friends sharing his joy. Until about a year ago, he still went fishing and ice fishing with his friends and family. He still enjoyed going to the farm and giving a little advice. He was also ready to go for a ride or to go out for a meal.

He was preceded in death by his parents; his wife; a daughter-in-law, Jackie Knebel; a grandson, John Knebel; a grandson-in-law, Bucko Monsen; four brothers, Paul, Dan, Richard, and Robert; and three sisters, Amanda, Hattie and Isabel.