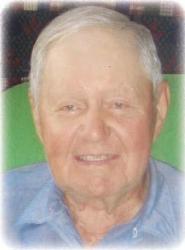 Services for John Pulfrey, 98, of Claremont were held on Saturday, July 15 at Paetznick-Garness Funeral Chapel, Groton. Rev. Bill Duncan officiated. Burial was in Union Cemetery, Groton, under the direction of Paetznick-Garness Funeral Chapel, Groton. Casketbearers were Ray Mack, Mark Hoines, Paul Burtness, Matthew Schuller, Kirk Swanson, and Mark Perkins. John W. Pulfrey was born on April 30, 1919, at Claremont, SD, to Robert Earl and Nina (Winter) Pulfrey. He attended school at Claremont and graduated from high school in 1937 in a class of 14 and was one of the last surviving graduates from his class. John assisted on the family farm and eventually took over the farm on the event of his father’s death. He continued as a very successful farmer from then on. John was truly a farmer at heart. He loved the various seasons, the planting, tending of crops, and harvesting. He had a special interest in animals. For many years, he raised pigs. He loved horses and enjoyed discussing the various horses running in the Kentucky Derby with his brother, Bob. John was involved with the Detroit Township and was proud of having served on the board for 45 years. John was also on the Board of Directors for the Farmers Union Coop Association in Claremont for 15 years. Another special interest was the Detroit Cemetery, where John helped with tending the grounds, trees and chapel for many years. John was a life-time farmer; and after his retirement, John never lost his love of the land and interest in farm animals. John was an avid reader and especially enjoyed reading old history books. He frequently pointed out various passages and pictures in the books that he thought others would enjoy also. In 2002, John had a heart valve replacement surgery. Following his surgery, he moved into Rosewood Court in Groton. John loved living there and frequently commented on the great staff. In December of 2016, John began living at Wheatcrest Hills Healthcare facility in Britton. He resided there until his death on July 11, 2017. John is fondly remembered by his family and friends as a kind man who was quick-witted, close to nature, and loved animals and music. He especially enjoyed watching the Lawrence Welk weekly reruns. Survivors include one nephew, Robert Pulfrey of Bonita Springs, FL; six nieces, Ellen Hershey of Albany, CA, Jean Marie (Paul) Burtness of Minneapolis, MN, Janet Lea Harris of Minneapolis, MN, Beverly (Ray) Mack of Watertown, Shirley (Al) Breaw of Tucson, AZ, and Linda (Marshall) Janisch of Tucson, AZ: one sister-in-law, Flora Pulfrey of Pt. Charlotte, FL; and good friends, Faye and Mark Hoines of Claremont. Preceding him in death were his parents; three sisters, Lourene Pulfrey, Mildred (Dale) Ziegler, and Genevieve (John) Ziegler; one brother, Robert Pulfrey; two nephews, John Pulfrey and James (Charlotte) Pulfrey; one niece, Nola Ziegler; two sisters-in-law, Alta M. Pulfrey and Ruth Pulfrey; and two brothers-in-law, Dale Ziegler and John Ziegler. www.paetznick-garness.com