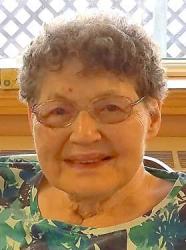 The funeral for Jeanne Remele was held on Saturday, April 22, at the First Lutheran Church of Britton. Rev. Terrill Sorensen officiated and interment was in the Britton Cemetery under the direction of the Price Funeral Chapel of Britton. Jeanne passed away on Tuesday, April 18, 2017, at Wheatcrest Hills in Britton, surrounded by her family, at the age of 84. Jeanne Edith Berger was born on February 5, 1933, in Cedar Falls, IA, to Oscar C. and Hattie Lyle (Fortsch) Berger. As a youngster, she grew up on the family farm near Lake City and attended the Hamilton Township School. On June 6, 1954, she was united in marriage with Lyle Remele on the Berger Family Farm. Together, they farmed and raised their family on the Remele Farm. They eventually moved into Britton. Lyle passed away on November 18, 1985, and Jeanne continued to make her home in Britton. Jeanne was a member of the First Lutheran Church where she had participated in the Circles and Bible study, was a member of the choir and helped with their annual bazaar. She also was a longtime member of the Rebekahs and the Royal Neighbors. Jeanne gave freely of her time to visit with residents at the nursing home, delivering Meals on Wheels and helping with the Fun After Fifty organization where she played cards and Bingo. Perhaps what she enjoyed above everything else was simply working with her flowers in the garden, tending her lawn, or making a batch of strawberry-rhubarb jam to share with family and friends. Grateful for having shared her life are her children, Tim Remele of Pierre, Kim (Ron) Mikkelson of Sioux Falls, Linda (David) Burough of Palisade, CO, and Mae (Scott Moore) Jenkins of Aberdeen; her grandchildren, Ryan (Janel McDonald) Mikkelson, Justin (Alexa King) Mikkelson, Colin (Crystal) McGregor, Trinity (Byron) McNair, Tiffany (Klint Christensen) McGregor, Kelly Jenkins, Maria Jenkins and Austin Jenkins; 12 great-grandchildren; a brother, John (Arlene) Berger of Clark; two sisters-in-law, Luanne Jensen and Bonnie Buhl, both of Britton; and a number of nieces, nephews and their families. Preceding her in death were her parents; her husband; an infant son, Michael Remele; two brothers, Ed Berger and Sam Berger; and a son-in-law, Lee Jenkins. The family suggests that memorials may be directed to the Fun After Fifty, P. O. Box 469, Britton, SD 57430, or the First Lutheran Church, P. O. Box 150, Britton, SD 57430. Condolences may be directed to the family in care of Mae Jenkins, 1521 3rd Avenue SE, Aberdeen, SD 57401. An online guestbook and obituary are available at www.pricefuneralchapel.net.