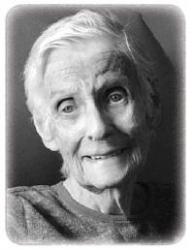 Jane Margaret Swanson passed away peacefully at Elim Care Center in Fargo, ND, on July 6, 2017, under the care of Red River Valley Hospice. A celebration of Jane’s life will be held at Hope Lutheran South Campus Chapel in Fargo, ND, on Monday, July 24. There will be a visitation from 12 to 1 p.m., with service and fellowship to follow. Burial will be in Pleasant Valley Lutheran Church Cemetery, Kidder, SD. Jane was born on February 20, 1925, in Philadelphia, PA. After attending high school in Havana, ND, she moved to Coeur d’Alene, ID, with her sister where they helped in the war relief effort. On November 16, 1942, she married Clifford Swanson, from Kidder, SD, who was also in Idaho helping with the war relief efforts. In 1943 they returned to Kidder and began farming on the Clarence Swanson Farmstead. During their farming years she worked at the Marshall Manor Care Nursing Home in Britton for over 15 years. In 1984, shortly after Tippy passed away, she moved to Fargo where she owned and operated Candy Cottage with her daughter Nancy. In 1994, Candy Cottage became Moxie Java and Piece of Cake Bakery. Jane baked until she retired in 2015 at age 90. During her time in Fargo she touched many lives. Every Moxie Java customer and employee referred to her as Grandma Jane. She had numerous news stories and articles written about her hard work and longevity. Jane lead a life believing that hard work never killed anyone, and she will be remembered fondly by all of those people whose lives she touched. She is survived by their four children, Wayne (Kathy), Joy Magstadt (fiance Larry Helgeson), Nancy (Brent) Nerland, Cindy (Pat) Daschle; daughter-in-law, Cheryl Swanson Bosse; eleven grandchildren; and twenty-one great grandchildren. She was preceded in death by her parents, Walter and Clara Selder; her siblings, Sunny Sedler and Virginia Staehnke; two infant babies; son Gerald Swanson; and grandson Shea Magstadt. Jane’s husband, Clifford (Tippy) Swanson, passed away on May 10, 1981. The family would like to express their deep gratitude to the staff and nurses at Elim Care Center and the Red River Valley Hospice team. The care and compassion they provided to Jane as her journey came to an end was extraordinary. She managed to touch so many of their lives in a few short months, just as she had over the years at Moxie. In lieu of flowers, memorials are preferred to Red River Valley Hospice or Elim Care Center, Fargo. Online condolences may be shared at www.hansonrunsvold.com. Arrangements by Hanson-Runsvold Funeral Home – Fargo, ND.