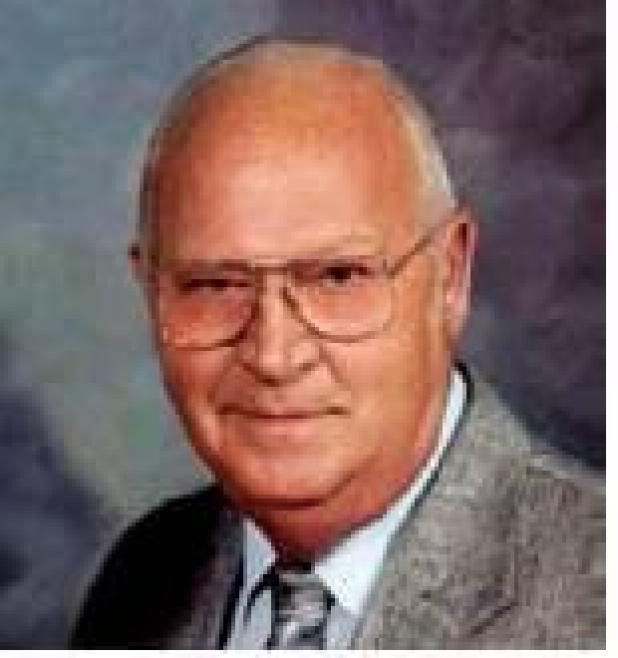 George passed away on Saturday, August 10, 2019, at Dells Nursing and Rehab Center in Dell Rapids at the age of 86.

George William Puetz was born on January 4, 1933, to William Ambrose and Mary Anna (Grohs) Puetz on a farm west of Ethan. He grew up there with his nine siblings and attended rural Davison County Schools. His secondary years at Ethan High School were filled with sports – a member of the six-man football team and was part of the Ethan Basketball team that went to the State B’s in 1951. In order to convince his father to allow him to participate in sports, George promised to do all of his chores at 6:00 every morning. After high school, George continued his education at USD in Vermillion until a knee injury as a running back forced the forfeiture of his scholarship.

On January 20, 1955, George was united in marriage with Mavis Arlene Peart in Mitchell. Their early married life took them to Ft. Chaffee in Fort Smith, AR, and later he was stationed at Ft. Bliss in El Paso, TX. His time in the Army was devoted to serving in the honor guard at parades and being part of the funeral honor detail, a calling in which George took great pride.

Following his honorable discharge, George and Mavis returned to the Ethan area. George taught at a rural school west of Dimock for a couple of years before taking a position with Puetz Construction of Mitchell. The construction work was somewhat seasonal at the time, and George needed a steadier job with the six young mouths to feed that had appeared at their home in an eight-year span. He took a job with the US Post Office and worked as a rural letter carrier out of the Ethan and Mitchell offices. He retired after serving for 35 years, and was extremely proud to receive an award for his accident free years of service.

To supplement his job at the Post Office, George also did custom cabinet work. For many years he operated M & A Cabinet Works out of a workshop behind the post office in Ethan. In addition to his woodworking talents, George was also a decent mechanic and expert tinkerer. He could fix most anything, although some of those fixes involved wire and/or duct tape. Always a dreamer and a schemer, George could look at a situation and come up with some solution, even if the idea was somewhat “outside of the box.” He was not a big fan of aging, and loved to revisit the glory days of his youth.

George was an avid outdoorsman and sportsman. He loved to take his family on hunting and fishing trips. Some of the best memories were made on those trips, and many family stories stem from those adventures. He also played softball on a local team for many years. The dance floor was another area where George, along with his wife Mavis, truly shown his brightest. His large frame and her diminutive stature should have made them an unbalanced pair, but they would have held their own with Fred and Ginger. No couple could match their jitterbug!

George had been an active member of Holy Trinity Catholic Church in Ethan, served on the council and was a Eucharistic Minister. He also belonged to the Alvin Erpenbach Post #231 of the American Legion in Ethan and was an Ethan city councilman for a few years.

A couple of years before Mavis’ death on September 8, 2013, they moved to Britton to be closer to family during her final years of cancer treatment. After her passing, George moved to the apartments at Brady Health and Rehab in Mitchell, and later to Prince of Peace in Sioux Falls.