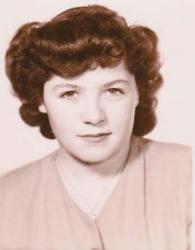 The memorial service for longtime Havana, ND, area resident, Ethel Ellestad, was held on Monday, May 1, at the First Lutheran Church of Britton. Rev. Terrill Sorensen officiated. Ethel passed away on Monday, April 24, 2017, at Sanford Health in Fargo at the age of 81. Ethel’s arrangements have been entrusted to the Price Funeral Chapel of Britton. Ethel Mae Marlow was born on June 28, 1935, in Marlow, SD, to Louis Virgil and Alice (White) Marlow. She began her schooling while living in Marlow. As a youngster, she moved with her family to Havana, ND, where she completed her education. On September 2, 1953, Ethel was united in marriage with Derwood Louis Ellestad in Webster. They made their home in Havana. In addition to raising her family, Ethel also worked as an aide at the Marshall Manor in Britton for about six years. She later took a job as a cook with the Havana School, where she remained for the next 12 years. After the school closed there, she continued as a cook at Sargent Central School in Forman for a few more years. Her love of cooking and baking extended far beyond her job at the school. She was always turning out something delicious to eat. Her home was always immaculately clean and her coffee pot was always on. Ethel had a deep love of all animals, but especially for dogs. She enjoyed going to rummage sales, early morning walks, and sharing some time visiting with friends and family over a good cup of coffee. Her children all know that no matter what they did, she was always their staunchest defender. Her kind and caring soul was evident in her willingness to lend a helping hand to anyone in need. Grateful for having shared her life are her husband of 63 years, Derwood Ellestad of Havana; five children, Darlene (Dean) Colbert of West Fargo, ND, Terry Ellestad of Palmyra, PA, Timothy Ellestad of Havana, Darrell Ellestad of Havana, and Debra (Jake) Sorenson of West Fargo; six grandchildren; 13 great-grandchildren; two sisters, Pearl (Darwin) Brakke and Janet Lentsch; and two brothers, Louis Marlow and Dale Marlow. Preceding her in death were her parents; a son, Todd Ellestad on January 31, 2014; four sisters, Lorraine Larson, Gloria “Dolly” Krutsinger, Shirley Krutsinger, and LaVonne Nesta. Condolences may be directed to the family in care of Derwood Ellestad, 206 2nd Street North, Havana, ND 58043. An online guestbook and obituary are available at www.pricefuneralchapel.net.