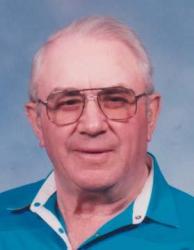 The funeral for Calvin “Con” Colby was held on Saturday, May 6, at Trinity Lutheran Church, Forman, ND. Pastor Bob Ohnstad and Pastor Wayne Hutchins officiated. Burial was in the Forman Cemetery under the direction of the Price Funeral Chapel of Forman. Con passed away on Wednesday, May 3, 2017, at Four Seasons Healthcare Center, Forman, with his family by his side, at the age of 91. Calvin C. “Con” Colby was born on August 22, 1925, on a farm two miles west of Forman to Edward A. “Ted” and Winnie Leah (Sterner) Colby. As a youngster, he moved to a number of different farms with his family and attended rural Sargent County schools. In 1944 he graduated from Forman High School. After completing his education, he ventured west and helped with the war effort as a welder in a ship building plant. After returning to Forman, he was united in marriage with Mae R. Walstead at the Walstead family farm near Rutland, ND, on January 24, 1948. They farmed for the first few years of their marriage. In the mid 1950’s, Con started a bulk oil service, which he continued until his retirement when he sold the business. In addition to the oil delivery business, Con was also engaged in a number of other ventures. He owned and operated the Forman trailer court, an apartment building, a laundromat, a car wash, hauled gravel, and formed a farming partnership with Rex Corliss. He also found time to attend school and learn about furnaces, and became quite adept at fixing them. Above all else, Con always put customer service first and foremost in everything that he did. Mae passed away on November 12, 2007, and Con continued to make his home in Forman. In 2015, he became a resident at Four Seasons in Forman. At the age of 16, Con lost his right arm at the elbow. The recovery from that made it necessary for him to miss enough school that he had to graduate from high school a year later than the rest of his class. During Con’s lifetime, he never let the missing limb cause him to use it as an excuse to not do his share of the work. In fact, Con did more work with one arm than most men can do with two. He was truly his happiest when he was working! Grateful for having shared his life are his three daughters, Ann (LeRoy “Turk”) Nelson of Forman; Ginger (Dennis) Nelson of Forman; Sally Smith of Havana; eight grandchildren; 12 great-grandchildren; two step-great-grandchildren; and two brothers, Dale “Doc” (Joan) Colby of Glenwood, MN, and Larry (Anne) Colby of Hereford, AZ. Preceding him in death were his parents; his wife; six siblings, Ione Warren, Allen Colby, Edward “Chub” Colby, Marlene Stenvold, Joyce Narum, and Cozy Wehunt; and a son-in-law, Brad Smith. Condolences can be directed to the family in care of Ann Nelson, 610 6th Street SW, Forman, ND 58032. An online guestbook and obituary are available at www.pricefuneralchapel.net.