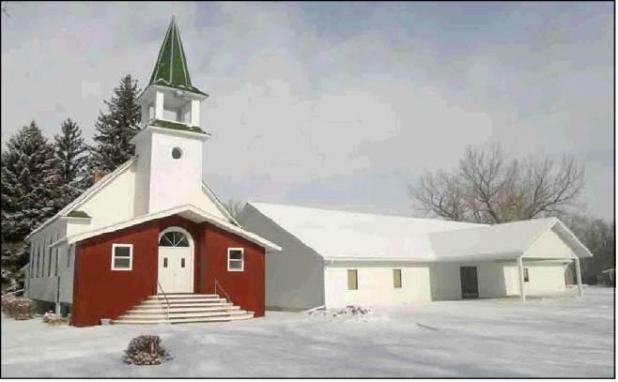 This photo represents the old and the new of the Zion Reformed Church of Amherst which is celebrating its 100th anniversary this weekend. The old church on the left housed the congregation from 1920 until the new church was dedicated in 2008. The old church was originally located in the country in Weston Township and moved into Amherst in 1946.

The Zion Reformed Church of Amherst raised funds for a new church in less than six months and dedicated the new building in April of 2008, replacing the old building that had housed the congregation since 1920.

The Zion Reformed Church of Amherst has been a rural American success story – for 100 years.

The congregation will be celebrating that century of service on Saturday and Sunday.

Saturday at 2 p.m. past and present congregation members are encouraged to bring photographs of any special times they may have had in Amherst and coffee and cookies will be served. An informal meal of hot sandwiches and dessert bars is set for 5:30 p.m. with a “Singspiration” service at 7 p.m. followed by a Fellowship Lunch and visiting.

On Sunday, worship is planned for 10 a.m. with special music, hymn singing, and sharing from former pastors. A catered dinner will be served at noon with an anniversary cake for dessert.

Pastors planning to attend include Mrs. Pomp and family, Don Flaherty, Glenn Raynor, and Bill Duncan. Hal Phoenix is the current pastor. As of last week 110 people had signed up to attend the celebration.

Those 100 years were not always easy, and there were times when the future looked rather bleak.

“There were times back in the 80’s when we didn’t know if we could keep it going,” said lifetime member and church treasurer John Symens. “But it seemed like any time that came up, we’d hear from somebody that was impacted by the church and how much it meant to them. It was like it was a reminder given at the right time that we had a purpose.”

That reinforcement also came in the form of a new church home 11 years ago. It was decision time for the 20 families at Zion Reformed. Their church home was showing its age and needed new siding and windows, the roof needed new shingles, there were issues with the floor in the basement, they had a space issue for weddings and funerals, and a bunch of steps made access difficult for older members.

The congregation had started a building fund but all of that money was used to maintain the old building. When they crunched the numbers, congregation members found that the cost of desired improvements would put them nearly halfway to what it would cost to build a new facility, and they decided to take the plunge.

Expectations were that it would take five to 10 years to raise needed funds. Instead, it was just six months from the time the congregation made the decision to build that they broke ground for the new church. Contributions came not only from church members but from 14 states across the country.

“When the money came in it kind of bowled us over,” admitted Symens. “We felt God was telling us we needed to go ahead with it, that he had some plans for us.”

In 1946, the building was moved to Amherst and renamed Zion Reformed Church. That structure served the congregation until the new building was dedicated on April 13, 2008.

Since the new building was erected the congregation has not grown, but it has been able maintain its membership with about 35 people attending services each Sunday.

“We’ve lost members due to death or moving away but they have always been replaced by somebody else,” said Symens. “You can’t say we’ve grown, but in a way we have. We just keep faith that God is going to take care of us. If we do our part, He keeps the church viable for us.”

The church continues to sport a strong youth program, including Vacation Bible School each summer. A wellattended adult Sunday School class also has between eight to 12 participants each week.

“Celebrating 100 years is a nice benchmark, and it’s good to know that we’re still a viable ministry here,” concluded Symens.