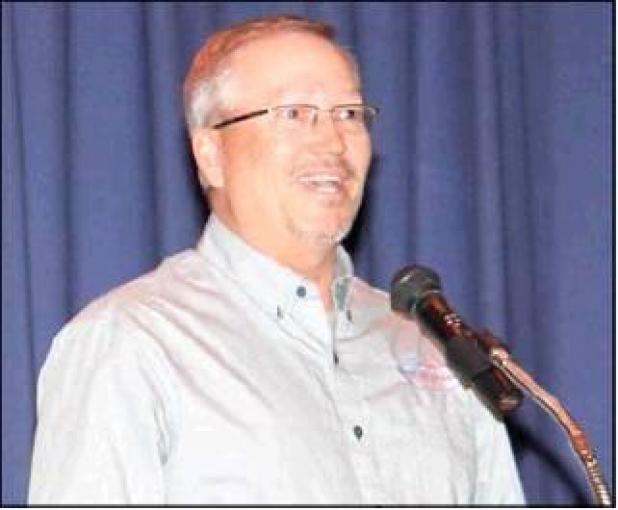 Britton native Colonel Scott St. Sauver, Retired, was the featured speaker at the Veterans Day program held at the Britton-Hecla School on Monday.

“You can stand at attention when the National Anthem is played because that is not a political statement, it honors our country and our flag,” said St. Sauver. “You can also fly flags and remove your hat during the anthem, but the best way is just thanking veterans for their service.”

Col. St. Sauver also referred to veterans as heroes and related a story from long-time Minnesota Vikings coach Bud Grant. He has had the chance to get to know the former coach through his American Heroes Outdoors program televised on Fox North.

“Bud, now 92, is a World War II veteran, and he is quite a storyteller,” related Col St. Sauver. “He talks about the difference between heroes and stars. Football players are stars, but he keeps a list of veterans he knew from his childhood in his pocket and says they are the real heroes.”

Col. St. Sauver also has a list of his own heroes he keeps in his billfold. On that list are three men who died in his unit while stationed in Iraq. He recognized all veterans in attendance as well as all of those who had relatives who served.

“No other job asks so much of its members,” stressed Col. St. Sauver, “and most of them are too humble to tell about what they did. We should be thankful for those who have served and those currently serving. Those people are among the very best and brightest in America.”

The colors were presented by the VFW/American Legion Color Guard. Pastor Lloyd Redhage gave the invocation and benediction, Jenna Andrews and Lillian Boyko represented the Girls Scouts, and the kindergarten class led the National Anthem.

The Britton-Hecla High School Band performed the National Athem and performed a number, while the fourth and fifth grade students sang “America the Beautiful” and “My Country ‘Tis of Thee.”

The “Gregory Gorillas” were out in force for the pep fest prior to Britton-Hecla’s semifinal football playoff game on Friday. This group of gorillas (football team parents) were defeated in a competition with the Braves prior to the gridders sending the Gorillas packing Friday night. Who do you recognize in the photo?