Britton-Hecla graduate Dallas Goedert recently completed his third season with the Philadelphia Eagles in the National Football League. Goedert, number 88, is shown running onto the field in Philly under the watchful eye of a flying eagle and the and the team logo, “Fly Eagles Fly.” 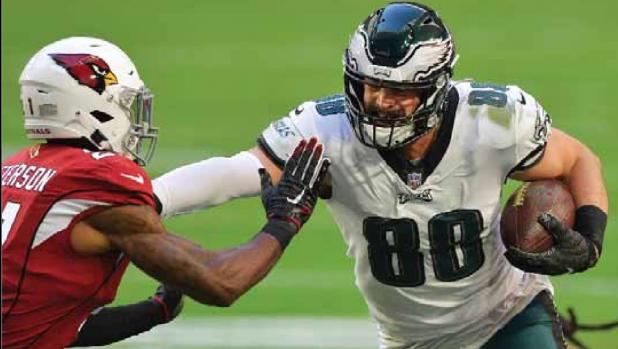 Britton-Hecla grad and Eagles’ tight end Dallas Goedert applied a stiff-arm to an Arizona Cardinals defender after catching a pass. Goedert is entering the fourth and final year of his rookie contract with the Eagles.

It wasn’t the kind of year that Britton-Hecla grad and Philadelphia Eagles tight end Dallas Goedert expected on many fronts.

He suffered his first major injury in his three-year NFL career, his team fell from a 9-7 divisional championship year last season to a 4-11-1 record in 2020, and everything was different due to the COVID-19 pandemic.

But despite all of that and missing five games due to injury, he still was just 15 yards behind the team leader in receiving yards. He caught 46 passes for 524 yards and three touchdowns. A year ago he was 58-607, but that came with four more games played. In his three-year career he has caught 137 balls for 1,465 total yards.

Goedert is spending some time in Britton before heading to his agent’s training facility in Irvine, CA, to prepare for the 2021 season in mid-February. He’ll be back in South Dakota in June before heading back to California for final tune-ups prior to fall camp.

His thumb is still a bit stiff after breaking it and having a pin put in it early in the season. He fractured a bone in the back of his ankle that kept him out of four games, and then he tweaked a calf muscle that kept him out of the season finale. Everything is pretty much healed now, but at age 26, he’s already finding it takes a little longer for the body to bounce back.

“They say for every year in the NFL you need to add seven years to your age, like dog years,” chuckled Goedert. “I’m not sure I totally believe that, but age is starting to catch up with me. I used to do whatever I wanted and always felt good. Now when I lift weights I get a little sore, I now need to do a little more of a stretching routine, and need to work more on my soft tissue with some massage. Next year the league is adding one more game to the regular season (total of 17), and I know I’ve got to really focus on preventative care this off-season.”

Despite the injuries, Goedert felt he met his personal expectations for the 2020 season.

“It was my first year missing games, and the injuries stunk, but I thought I had a really good season. Obviously, I would like 100 yards and 10 catches every game, but the way the offense was going this year I was asked to spend more time pass blocking to help out our young tackles because of injuries.”

Those injuries began before the season began and plagued the Eagles all year. It was the first time in Goedert’s threeyear career that the team did not qualify for the playoffs.

“Last summer Brandon Brooks, one of the best offensive guards in the NFL went down with an injury, and our whole line ended up getting down to the third-string players except for center,” noted Goedert. “No NFL team has that many backups to make it work.”

The COVID-19 pandemic also changed things a bunch. Playing before cardboard cutouts instead of real fans was difficult.

“The crowd can kind of defeat you or give you that energy, and there was not a whole lot of that this year,” said Goedert. “When there were no fans it just kind of felt like practice, and it was tough to sustain any momentum. There just wasn’t the same feel or energy that I got to experience my first two years. Scoring a touchdown was still fun, but there was no comparison to having the home fans celebrating with you or fans on the road booing. That is really why you play the game, and I missed that for sure.”

The virus also affected everyday activities. Instead of spending their days in the team facility, many meetings were held virtually. Players had to be tested for the virus every day from July 28 through Jan. 3, and most of their off time was spent at home.

“The team didn’t force us to do anything, but they did say if we did something they didn’t like we were going to pay for it,” noted Goedert. “If we were caught out in public without a mask it was a $50,000 fine. They also highly recommended that we not get together with family over Thanksgiving or Christmas. They just cared a lot about getting through the season and getting to a Super Bowl more than caring about our happiness.”

There is a lot of change in the air for Goedert as he prepares for his fourth season, the last of his four-year rookie contract. The Eagles just hired a new head coach, there will be a new tight ends coach, and he will have to decide if he wants to remain a part of the Eagles’ organization.

“I didn’t really expect Head Coach Doug Pederson to get fired,” said Goedert. “He won the Super Bowl three years ago, the division title last year, and this year we had so many injuries. We will have a whole new coaching staff. You never know if grass is greener on the other side, but I’m looking forward to it.

“I’ve heard really good things about our new coach (Colts offensive coordinator Nick Sirianni), and it will be fun to learn a new offense and see the game through somebody else’s eyes. That’s what you do in the NFL – continue to learn and try to get better. It’s a little disappointing because I had built relationships and the coaches knew my strengths. Now I have to do that all over again, but it’s an exciting time.”

The next few months will also likely dictate what direction Goedert’s career will take in the future. In this offseason, between the third and fourth year of his contract, the Eagles can offer Goedert a negotiated contract extension. If he does not sign an extension he will become a free agent after next season.

“I’ve talked to my agent a little and he will put together a presentation to give to the Eagles on how much money we think I’m worth. The Eagles will be able to counter, and within the next month or two we’ll probably start to have a conversation. It’s my first time doing this, so it’s going to be exciting. Hopefully the Eagles like me as much as I like being there.”

If an agreement is not reached for an extension prior to the season, Goedert’s fourth year takes on added importance.

“It will be like every other year, you have to go out there and prove it. If you play badly or make one mistake, the whole league can turn on you really quickly. I’m not really just playing for the Eagles but I’m playing for every team in the NFL. They watch film on every play and are always watching to see who might be a fit for their offense. That’s why you have to make sure you’re going out there every day, giving it your best, and perfecting your craft.”

Goedert feels he has done that for his first three seasons.

“The first year all I thought about was what I was doing. The second year I thought more