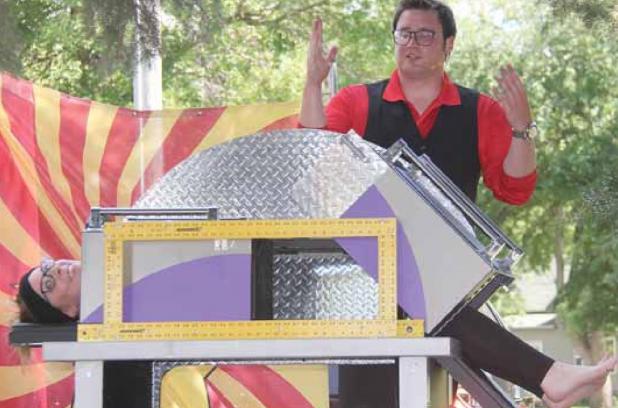 Magic Joe put on a pair of shows for Summer Fest attendees on Saturday. The grand finale of the afternoon show was sawing this woman in half.

It was a hot time in Langford for part of its annual Summer Fest celebration last weekend but Mother Nature provided ideal weather for Sunday activities.

An Alumni Party kicked off the three-day party on Friday with VanMeter Entertainment at the Front Porch and Eclipse was the featured band on Saturday. A Color Run/Walk at 7 a.m. Saturday jump-started a busy day that featured town-wide garage sales, a Texas Hold’em Tourney, Magic Joe Family Shows, a community meal from the Incredible Edibles food truck by Kristi and Mike Stiklestad of Pierpont, and a Shriner’s Bean Bag Tournament.

Fifty-five runners/walkers participated in the 5K Color Run with the top three finishers awarded DaMar C-Store gift cards. Justin Haven won the event with a time of 20:18, followed by Jace Haven at 21:10 and Ethan Boekelheide at 22:28.

On Sunday the Incredible Edibles served a breakfast/ lunch, followed by a community church service at the football field. The annual Show ‘n Shine Car Show was held at the Park of the Pines with 150 cars registered.