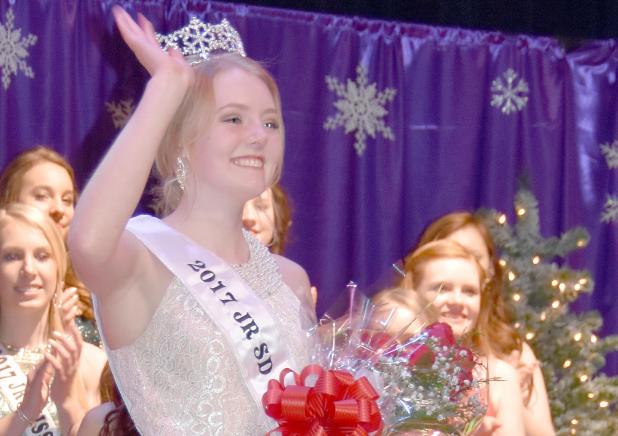 Emma Storley, a freshman at Britton-Hecla High School and the daughter of Shane and Vonda Storley of Britton, was crowned from a field of 25 girls. She will represent the state, along with the South Dakota Snow Queen to be crowned this Saturday, for the upcoming year. Britton Area Snow Queen Kourtney Bremmon will compete in that event.

“It really hasn’t sunk in yet,” said the newly-crowned royalty. “I was in shock. I was so surprised and obviously really, really happy.”

Storley continues the recent success of Britton Area candidates. Olivianne Stavick was crowned the state junior queen in 2011, followed by Alexandra Farber in 2012. Alexi Beck also wore the state crown in 2006 and Jennifer Bosse Deutsch in 1989.

The latest Britton queen actually received some advice from Farber.

“I texted Alex the night before I came and she told me to always have a big smile and just be myself,” said Storley. “That was really nice.”

She took that advice to heart.

Part of the selection process involved answering an impromptu question at a banquet held for parents on Friday night. All the candidates had to leave the room and then returned individually to answer the question from a Mark Twain quote: Two of the most important days of your life are when you are born and when you realize what your purpose is. What do you think your purpose is?

“I always try to be the best person I can be and taking that and using it to spread positivity to people the best that I can,” said Storley. “I also always try to stay true to who I am and be myself.”

She does walk that talk.

Storley is a member of the Britton-Hecla Student Council, she is a cheerleader for football and boys basketball, is a member of her church youth group, teaches Sunday School for three and four year-olds, and is a student liason for the Marshall County Food Pantry. She also finds time to participate in volleyball, basketball and track.

“The Britton community and school offer a lot of activities for the girls to participate in,” noted Tena Kraft of the Britton Action Club (BAC), which sponsors the local snow queen festival. “I believe that having a wide variety of experiences helps at the state level. BAC also holds a workshop before the local competition where we try to give the girls helpful information and pointers for competing in the festival, so my hope is that what we do here in Britton carries over and really helps them as they move on to the state competition.”

“Emma is a very well-rounded girl,” added BAC member Kelsi Heer. “The judges only interview the girls for a few minutes but their resumes really tell their story. Emma is a very kind person and thoughtful when speaking. I know that showed in her interview and throughout the competition.”

One of Storley’s goals during her reign is to advocate the spreading of positivity – something she traces back to a Rachel’s Challenge presentation at the Britton-Hecla School several years ago.

“When I was in seventh grade I did a documentary with Maddison Frohling on Rachel Scott, who was killed at Columbine, about how small acts of kindness can cause a chain reaction,” said Storley. “I want to advocate spreading positivity this year and just want people to always be kind no matter what, even if they’re having a bad day.”

Judges also asked Storley how she could be a role model for young kids.

“Rachel’s Challenge” talks about always being kind to others and I think being a member of the Friends of Rachel group at school will help to spread the positivity theme.”

Activities began for the junior snow queens from around the state on Friday morning with games and icebreakers to get to know each other. They also had workshops to learn how to network and talk to people and even had a self-defense class from two Aberdeen detectives. A third workshop was interviews with judges and they all attended a hockey game.

Ever since she was a young girl Storley dreamed of wearing a crown.

When judges asked her what character she would trade places with she said Belle in Beauty and the Beast was always her favorite Disney princess because Belle loved to read. She participated in the Little Miss Britton Contest at the local snow queen festival, and she loved going every year to see the dresses.

“It was always really exciting and I always used to think about being crowned. But I never thought I would make it to win at state.”

Now that the dream has become reality, Storley faces a busy year ahead. She already went shopping with her Mom for dresses for the state Snow Queen Festival this weekend and at the end of the month she goes to St. Paul, MN, for their Winter Carnival.

“I think the biggest challenge will be all the traveling, and I’m going to have to miss a lot of sports like basketball, track and swim team. But it will all be worth it. I’m most looking forward to getting to spend the next year with whoever is crowned the 2017 South Dakota Snow Queen.”

Through her travels, South Dakota and the region will also have the opportunity to meet the girl that judges picked from among 24 others to represent the state.

“I don’t really know what made the difference with the judges but I just always wanted to be myself, and I tried to show them who I was the whole time,” concluded Storley. “I never tried to be something that I wasn’t.”