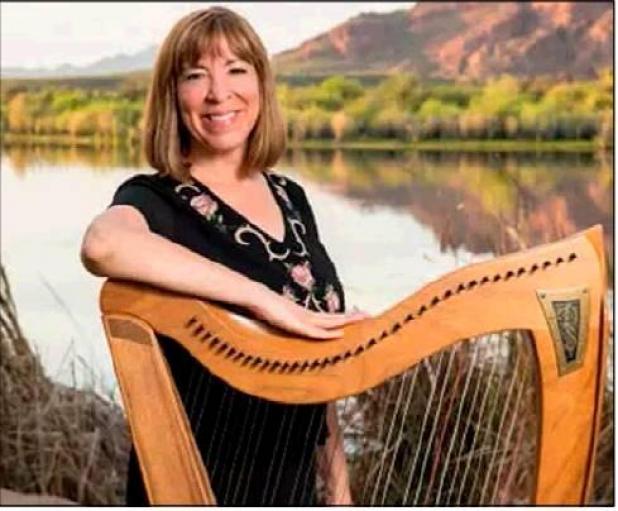 Karin Gunderson of Phoenix, AZ, will sing and play her harp at a concert planned for the First Lutheran Church in Britton on Wednesday, July 17. She will also host a seminar and meal on July 18 at the church.

Karin Gunderson has personally witnessed the stairway to heaven for hundreds of hospice patients and comforted them along the way.

The source of that comfort has been her harp music, and she will share that music and her stories with area residents at her Encounter With Heaven Concert at First Lutheran Church in Britton on Wednesday, July 17, at 7 p.m. Gunderson will also host a “God’s Story In Your Life Workshop” and meal at the church on Thursday, July 18, at 5:30 p.m. Attendees are asked to bring something to share for a potluck.

A graduate of Concordia College in Moorhead, MN, Gunderson now lives in Phoenix, AZ, and is an accomplished vocalist, harpist, pianist, flutist, and story teller. She has taken her Heavenly Harp music ministry to concert halls and churches in over 40 states. For 11 years she brought peace and comfort to over 25,000 hospice patients and their families. Fondly known as the “singing harpist,” she shared daily in the amazing experiences of patients as they crossed into heaven and has written a book called, “Encounters With Heaven: Stories of God’s Surprising Presence.”

Ironically, Gunderson did not learn how to play the harp until she was an adult in her 30’s. After taking lessons for about a year and a half, her teacher encouraged her to go to a hospice and play, and she felt a calling to that ministry.

She found her music to be just as therapeutic for her as it was for hospice patients and spent about 30 hours a week working in hospice care.

“After about two years I said to my husband that I didn’t think I have ever been so relaxed in my life. It was like putting myself into hypnosis. The hours would just fly. I didn’t know at the time that a harp can regulate skin temperature, electrical impulses in the body, brain waves, hormone levels, blood pressure, and increased oxygen in the blood.”

Gunderson explained that the harp is a unique instrument because it covers the full range of tones from low to high, from a bass to a flute. The sound also comes out from 360 degrees, not straight ahead like from a trumpet.

During her concert, Gunderson will relate numbers of examples of how music has helped and comforted people.

“I’ve played for many people close to death with respiratory issues when they typically have about a 30 percent oxygen level. But when I start playing the oxygen goes up to the 60 percent range and stays there the whole time I play.

“Another person had a stroke, was slowly fading away, and had not woken up since the stroke. When I came in and played he stretched, sat up in bed, said he was hungry, asked what was for breakfast and when he could go home.”

Then there was the man who was being fed by a nurse, and the nurse told Gunderson that he just spoke gibberish.

“When I had finished playing he said, ‘Thank you very much. I just enjoyed it so much.’ And he was speaking completely normally. The nurse’s jaw just dropped. Somehow the music had connected something that had been disconnected from a stroke.”

Gunderson is sometimes accompanied by her family. Her daughter plays the harp and flute and sings, and her husband is the music director at a church in Phoenix. But on this tour, she is accompanied by Amanda Pace, a student who grew up in her church. The duo has been singing together for a while.

Gunderson’s inspiration to begin her concert tours started when she was faced with getting a concert grand harp back and forth from Phoenix to Minnesota where her daughter was going to school.

“I thought if people could know the stories I had run across through my work that they wouldn’t be afraid of dying. I really felt called to do that and started just sharing some of those amazing stories along with the music. After almost every concert somebody tells me they are not afraid of dying anymore.”

She has also added the workshop to help people deal with death but also with life issues.

“We look at how God has worked in our lives,” said Gunderson. “A lot of people never take time to look back and see some of the things they thought were most horrendous and see how God has used them for the most good. And sometimes we are willing to forgive others but hold things against ourselves. That is like drinking poison and asking someone else to die.”

“We look at some techniques for reframing things so we never have to be a victim of our story. Part of that is becoming more aware of the thoughts running through our minds that we don’t normally pay attention to and reframing the ones that empower us. We need to think of the eternal perspective rather than the now perspective. In the span of eternity we may see things totally differently.”

Gunderson has also been able to give back through support from her audiences. Last year her ministry bought a well that services over 500 families in Africa, it has funded several college scholarships and donated funds to a Navajo reservation.

The “Singing Harpist” encouraged men to also attend the concert.

“Sometimes people think of our concert as a women’s thing, but it’s definitely something for everyone.”

The takeaway Gunderson hopes for is that people will have a greater sense of never being alone.

“We are always surrounded by a great cloud of witnesses that the Bible talks about and will not have to face death alone. The most difficult thing we have to go through, which is death, has something so wonderful attached to it. It’s a joyous celebration.”