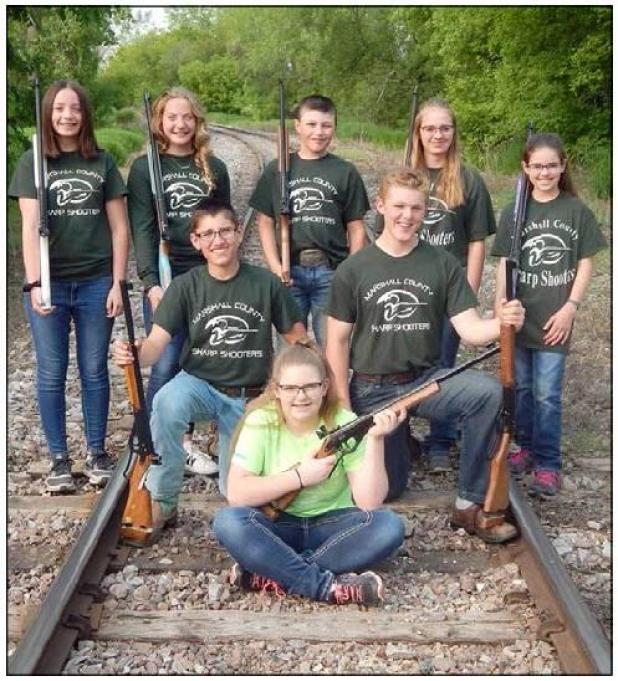 The Marshall County Sharpshooters are aiming to add another chapter to their already impressive resume when they travel to Rogers, AR, for the Daisy National BB Gun Tournament.

The team of Jayden Bender, Hunter Biel, Lexi Cutler, William Cutler, Katee Freeman, Dane Hansen, Erica Symens, and Montana Marlow will leave for Rogers on Monday. The shooting competition, which includes youth up to age 15, is set for Friday and Saturday, July 5-6.

Area residents can follow the Sharpshooters results at the national tournament online at orionresults.com. Competition begins at 8 a.m. and scores will begin to be posted by 8:15 a.m. Marshall County shoots the early shift of prone and kneeling on July 5 and the late shift of sitting and kneeling starting about 1 p.m. on July 6.

The competition consists of prone, standing, sitting, and kneeling positions, along with a written test score for a total of 500 points per competitor. Five shooters will compete with two participating as alternates in a separate competition.

Sharpshooter coaches feel this year’s squad can contend for a top three spot after placing sixth a year ago and fifth in 2017. A total of 63 teams will participate in this year’s tournament from across the country. The Marshall County squad has never finished out of the top 10 in the last 14 tournaments it has attended, earning two national championships, a second place, and a third place finish along the way.

“We think we have a strong team this year and have high hopes,” said 20-year coach Mike Kraft.

“We have some really good shooters than can shoot some exceptional scores,” added Harlan Hilleson, a BB gun veteran coach of 37 years. “But it’s kind of immaterial how everybody does. If they do what they are capable of, I don’t care where they place. The key is to keep focused on every single shot. The whole tournament is one shot at a time.”

When competing against the best in the country there is a fine line between the top finishers. Many times the nation-The Marshall County Sharpshooters will compete in the National BB Gun Tournament in Rogers, AR, next week. Team members are in front Montana Marlow. Second row Hunter Biel and William Cutler. Back row Erika Symens, Jayden Bender, Dane Hansen, Katee Freeman, and Lexi Cutler.

al title is decided not on the firing line, but on scores from the written test.

“We won the top team test award last year, and I don’t think anyone has ever won that back-to-back,” said Rose Kraft, who is in charge of testing and statistics for the Sharpshooters. “If we can keep that score high we will be okay.”

Consistency is a strength of this year’s team. The fact that five shooters return with national tournament experience is one of the reasons.

Freeman and Bender were alternates a year ago, and Schuller, Lexi Cutler, and Erica Symens were members of the fifth place team two years ago.

“On a bad night we shoot a team score of about 2340, and on a good night we’re at about 2370,” said Rose. “At 2370 we’re among the tops in the country. Pennsylvania and Georgia always field top teams, and we’re right there with them. The fact that we have five shooters with a year’s experience helps a lot. They know what it’s going to feel like and what to expect.”

“We’ve been there before and I think that takes some of the edge off the nerves,” said Bender. “We have to think of it as just another tournament. If we come through on the written test and stay confident when shooting, I think things will fall into place.”

Symens stressed the importance of thinking only of the next shot.

“We just have to not worry so much about what happened the day before and just focus on now. It can really mess with your head if you think about past shots instead of the next one.”

Equipment also comes into play, and the local coaches take painstaking measures to make sure all guns are in top condition.

“If you have something fail in a gun it can take a shooter from first to 20th in one shot,” said Hilleson. “One of the keys to winning is being the team with the least amount of mechanical problems, but something always happens.”

One of the reasons that South Dakota teams are recognized as among the best in the country is that they compete against the best every week during the regular season. Pierre and Humboldt are the other SD teams competing in the national event.

“We’re shooting against the best all year long,” stressed Rose. “When we go to the national meet it’s kind of like we’re just driving to Pierre but it’s Rogers, AR, instead.”

Shooters are making final preparations this week. Guns are checked and re-checked to make sure they are in peak operating condition, and drilling continues to prepare for the written test. That test preparation even extends to the bus trip to Arkansas.

“We take two days to get down there, but we have a strong 12 hours of driving, and we study a lot on the bus,” noted Rose. “We probably have a dozen study sessions during the bus ride.”

How well teams do in national competitions really boils down to their ability to focus mentally – whether it’s on the written test or on the firing line.

“The tournament is really a mental game,” Rose explained. “It’s no different than a state basketball championship. You can make 100 free throws in a row in practice, but when it’s time to shoot that free throw in a game you have to stay focused.”