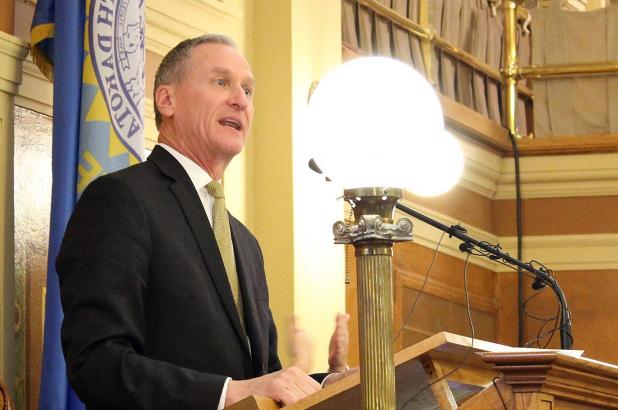 Daugaard made the announcement to a joint session of the Legislature during his annual State of the State message.

Sales tax collections are estimated to be down $5.8 million more than the projections shared by Daugaard in his budget address late last year. The governor said that while the agreement with Amazon doesn’t fix the state’s sales tax problem, “It’s a big step in the right direction.”

While the deal with Amazon will mean more money for the state budget, how much more is a mystery.

“The best information we have is very rough,” Daugaard said, addressing the budget question at a press conference after the State of the State address. He said that Amazon has declined to provide the state with information about its sales in South Dakota.

Daugaard said that Amazon has been a recent proponent of collecting sales taxes.

“They don’t want absence of taxability to be an artificial advantage,” Daugaard said, noting the online retailer’s similar deals recently with Iowa, Nebraska and Utah.

In South Dakota’s case, because of its simpler tax structure, Amazon will be collecting state sales tax as well as municipal sales tax.

“The municipalities will get their share of it,” Daugaard said.

Amazon will begin collecting the sales tax in February and make its first payment in March, after the Legislature has adjourned for the year. Daugaard said lawmakers would have a better handle on what Amazon’s sales tax collections mean for the state during the next legislative session when they will have almost a year’s worth of data.

Daugaard said it would be best for the state to create a very conservative budget during the current legislative session and then be able to make adjustments upward when the Legislature meets next year.

“You can only spend the money after it gets here,” Daugaard said.

During his speech, Daugaard also noted South Dakota’s efforts to make government more open and accessible. He said that during this session, he would back an effort to make booking photos, commonly known as mug shots, open to the public.

In the realm of better openness, Daugaard noted recent legislative efforts to curb conflicts of interest for state employees, the members of state boards and commissions, and local school board members.

Daugaard said he will continue efforts to keep a close eye on the best use of state property. As an example, he said the South Dakota Developmental Center in Redfield was built 120 years ago for 1,000 patients. With far fewer patients on a regular basis, Daugaard said he backs an effort to transfer some of the center’s buildings to the city of Redfield.

He also asked legislators to consider the sale of the STAR Academy juvenile facility in Custer. The academy closed last year and Daugaard said juvenile offenders are better helped through smaller, more efficient facilities closer to the offenders’ homes.

“We owe it to taxpayers to keep the state’s footprint to a minimum,” Daugaard said.

In the last session, the Legislature reformed the state’s school funding formula and increased the state sales tax to invest in teacher salaries.

“We are already seeing success from those changes,” Daugaard said.

“These are the cheapest college credits they will ever buy,” Daugaard said.

The governor also noted that 30 percent of South Dakota students who go on to higher education require a remedial math or English course. He said that remedial courses add expense to a college education and don’t count toward graduation.

Daugaard said he was disappointed that more school districts aren’t using the state’s Accuplacer placement program that tests students to determine the subject areas where they may need help. The program is paid for by the state, but last year was not used by 108 of the state’s high schools.

“Our high schools have been extremely slow” to use the program, Daugaard said.

Despite recent legislative action on justice reform, the state’s prison population is higher than expected. Daugaard attributed this to the increased use of methamphetamine.

“Like our neighbors, South Dakota is seeing a big increase in meth,” Daugaard said. “This meth epidemic needs to be addressed.”

To that end, he is supporting the formation of a Joint Interdiction Task Force to specialize in drug crimes. Daugaard said he would also support updates to state law that would allow authorities, with the proper court order, to tap cell phones.

“There’s no provision in the law for cell phones,” Daugaard said.