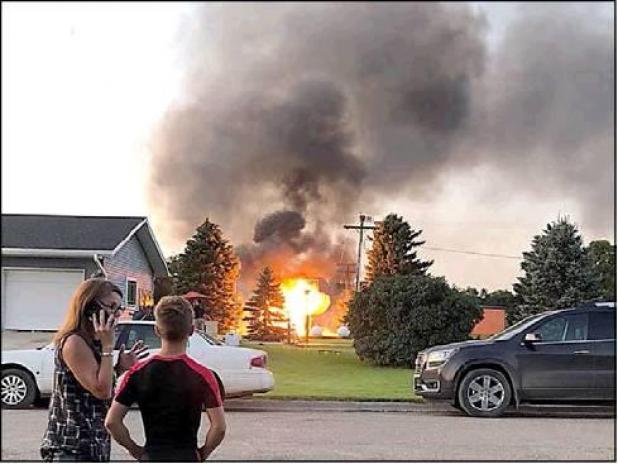 One bystander is on the phone while her son watches the propane fire behind Wheatcrest Hills on Friday evening. Two boys were seriously burned when the side-by-side ATV they were driving hit a vaporizer that ignited liquid propane. (Roger Gresh Photo)

Wheatcrest Hills residents were evacuated to the front porch of the facility as a safety precaution when an accident caused a propane fire just south of the building on Friday evening.

Two Britton boys suffered serious burns when the sideby-side ATV they were driving hit a propane vaporizer on the south side of Wheatcrest Hills in Britton Friday evening.

Easton Zuehlke, son of Brian and Jill Zuehlke of Britton, and Lincoln Kilker, son of Preston and Rachelle Kilker of Britton, suffered first and second degree burns and were airlifted to The Burn Center at Regions Hospital in St. Paul, MN. The prognosis is reported to be optimistic and both boys were progressing as expected.

Zuehlke, who will be a second grader at Britton-Hecla this fall, and Kilker, who will be in fourth grade, were participating in an activity as part of an annual End of Summer party at the Zuehlke home located a half block south of Wheatcrest Hills. The sideby-side was a slowly moving target for a football throwing contest, and the boys were driving the vehicle back and forth. When they went to turn around they hit and cracked the vaporizer connected to three large propane tanks.

“When a commercial business uses a bunch of propane it won’t vaporize quick enough without the use of a vaporizer,” said Brian Beck, who has worked with propane for 20 years with Full Circle Ag and also serves as a North Marshall fireman. “That vaporizer is hooked up to a one-inch line with liquid propane and there is a pilot light to ignite the vaporizer. When the side-by-side hit the vaporizer and the liquid propane hit the pilot light it just went up. If they had been over even a foot, it probably wouldn’t have hurt anything. It was just bad luck.”

The boys were able to exit the side-by-side immediately following the collision which probably saved their lives.

“If there had been doors on the vehicle or the kids had been wearing seatbelts, they may not have been able to get out in time,” said Beck.

The North Marshall Fire Department, Marshall County Ambulance, and the Marshall County Sheriff’s Office all responded within minutes of the accident. Firemen Beck and John Beaner donned protective gear and braved the heat and the threat of a possible explosion to turn off the valves that cut off the supply of propane.

“It sounded like a jet engine with propane coming from a tank that was almost full,” said Beck. “After we shut the main gas off, it was just vapor and the fire was not as big. In 20-30 minutes after the accident happened, we had things under control.”

In the meantime, residents of Wheatcrest Hills were evacuated to the front patio of the facility as a precautionary measure. Beck said there were concerns that the intense heat from the propane fire could have caused the propane tanks to rupture.

“There was no damage to our building and no residents were injured or hurt during the ordeal,” said Wheatcrest Administrator LaVonne Furman. “I’m always amazed at how people hold everything together in a true emergency.

People were there to help and everything just went like clockwork. The only concern I had was for the little boys.”

“Things could have turned south in a hurry,” noted Beck. “We absolutely dodged a few bullets. Any little thing happening could have changed things. Even something like the wind, which blew the heat away from the tanks. If it had been blowing the other way it could have been a different story. We were very fortunate. It could have been a lot worse without a doubt.”

A large number of area residents attending the party witnessed the accident, and it was a scary moment.

“We were sitting in the back yard and when it first happened you were just kind of transfixed looking at it,” said neighbor Sandy Gresh. “We were all kind of in shock for a minute. Then, once everybody realized what was going on, parents were all trying to find their kids and hugging one another in relief when they found them. I couldn’t get over how hot it was. It was a traumatic experience.”

Beck said there were some issues of onlookers at the site getting in the way of emergency personnel, and he said the accident should serve as a warning to people tempted to go see what is going on.

“When we tell people to stay back and stay away there’s a reason for it. If those tanks had exploded with all those people around, we could have really had problems.”