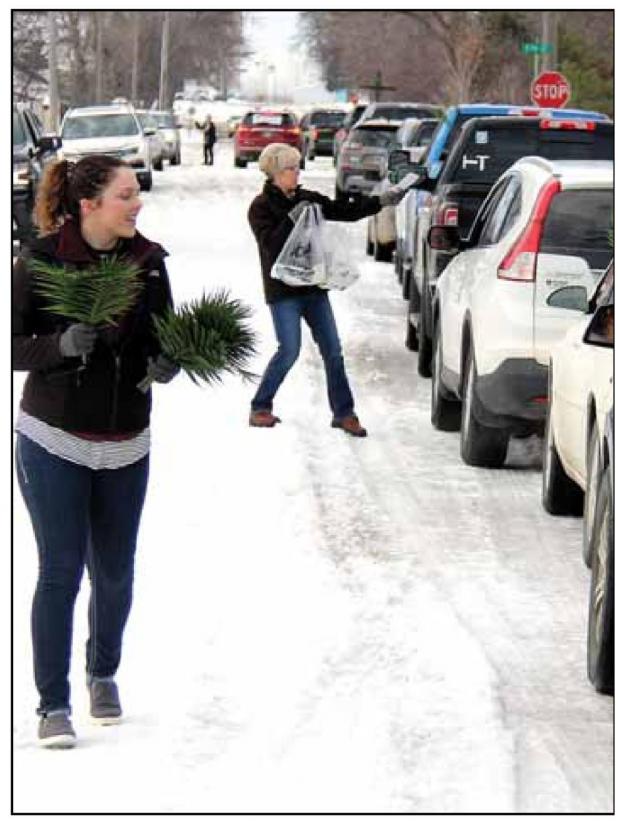 Church services took different forms due to COVID-19 concerns. Mallory Jones, front, and her mother, Lori Rabenberg, passed out palm branches and devotionals prior to a Palm Sunday procession around Britton, followed by an online service. 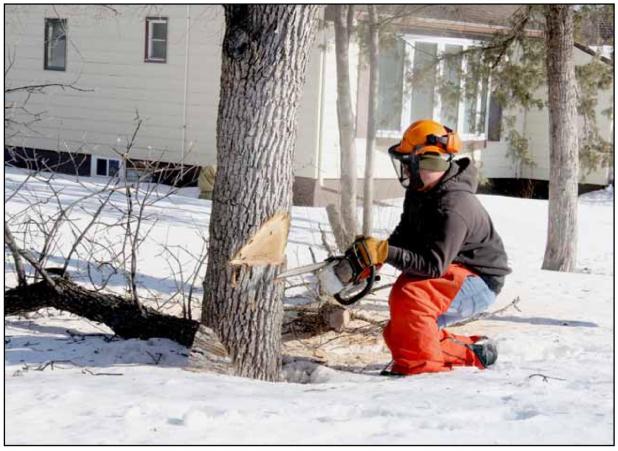 Britton city worker Brent Bury made short work of this to remove all ash trees before the arrival of the emerald ash tree on a city boulevard. The City of Britton is hoping ash borer, a pest that will kill all untreated trees.

A new library in Susu Village, Zambia, funded largely by donations of Elizabeth’s Library International, issued a challenge to her from Marshall County area residents, will hold its hometown to help build the library, and it is expected to impact grand opening this spring. Britton native Lana Lynn, chairman generations in the African country. 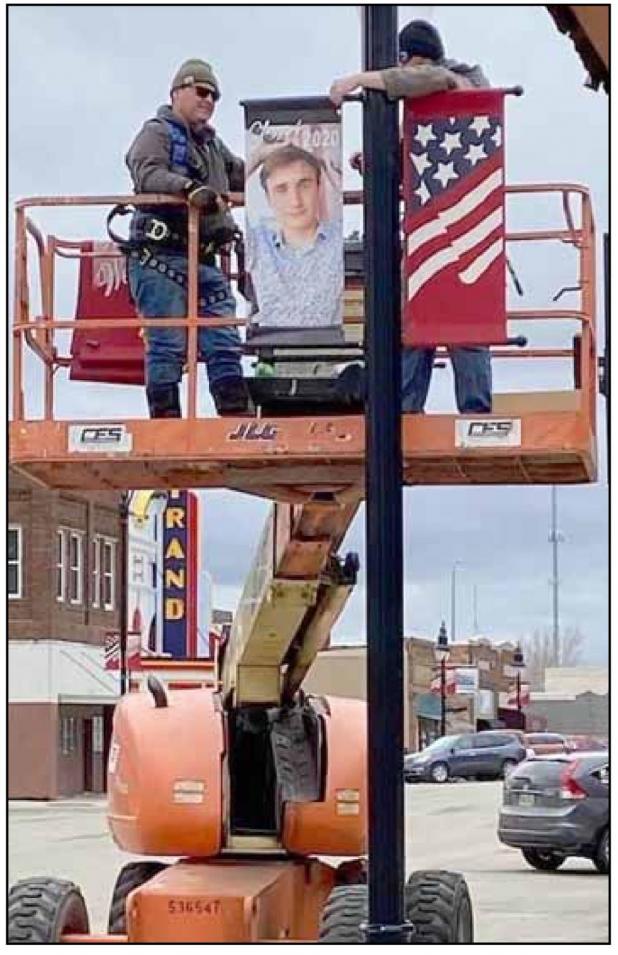 Britton city workers put up banners to honor members of this year’s Britton-Hecla senior class. This year’s graduation featured a parade down Main Street of graduates followed by an outdoor presentation of diplomas.

There is no question that the top news story for 2020, not only in Journal Country, but across the world, is the COVID-19 pandemic and how it has changed people’s lives.

Nearly every aspect of life has been changed in some way since the pandemic hit in early 2020. The first case of the virus in Marshall County was reported on March 30, and soon after in-school classes were suspended. Schools and teachers scrambled to put together on-line classes to continue students’ educations.

Other events saw drastic changes. Langford Area held its prom – in July. Britton-Hecla held its graduation outside, presenting diplomas one car at a time as each senior rode in a parade through town. Many funerals were held virtually or not at all, waiting for a more safe time to gather.

Some things were still close to normal. Both Britton and Langford held their Snow Queen events. School and fall sports both managed to resume a somewhat normal schedule, both working around COVID cases and quarantines.

There are always some silver linings. The Marshall County Healthcare Center set up a Wellness Clinic to separate healthy care from those battling the virus, and that has spurred the announcement of a new $4 million renovation. Movies have been suspended at the Strand Theatre, but popcorn helped unite the community when residents waited in line to buy the movie treat and help keep the theatre alive.

The bottom line is that life changed back in March and will likely never be quite the same. However, COVID-19 vaccinations began in late December locally and across the country, and health experts hope that will allow some sense of normalcy to resume in 2021.

Despite the disruptions caused by the pandemic, the past year has also brought a number of very positive changes.

Number one on the list is a $4 million hospital renovation that will be funded primarily through funds from the Coronavirus Aid, Relief, and Economic Security (CARES) Act. No fundraising efforts are planned. Approximately 6,600 square feet of existing clinic, entrance, business office, and lab space will be remodeled and a 5,000 square foot addition added to the facility.

Green Iron Equipment opened up a new $3 million building in August. The new 29,100 square foot structure nearly triples the space of the old facility that will be used for storage.

A $1.3 million project to rehabilitate the Leewood Apartments located on the west side of Britton is scheduled to get underway in early 2021. SLH Holdings of Brookings plans to completely gut the structure, which has been vacant for nearly two decades, and create 16 apartments. Two of those apartments will have three bedrooms to accommodate larger families.

The Britton City Council allocated $100,000 to wrap up some unfinished projects at the Britton Area Event Center. Plans are to install an elevator to the second level. Donations have already been received for two meeting rooms on the second floor, and another $20,000 donation has been earmarked for the elevator. Also included are a public address system, a sound-proof curtain for the stage, stage lighting, and a security system for the building.

A $100,000 grant was also received by the city for ballfield improvements. Plans are to also construct a new youth field.

Two 100-year institutions also became one on July 1. The Britton Journal and Langford Bugle merged to form the Marshall County Journal which will serve the entire county and region.

County residents also impacted the construction of a library in Susu Village, Zambia, that is scheduled for its grand opening this spring. The library, built largely through donations from area residents, is the first for the African community and is expected to impact generations.

After years of discussion, Marshall County voters were finally asked what they thought about building a new Courthouse and Law Enforcement Center – and they said no.

Sixty-five percent of 1,177 voters voted against an $8.6 million bond issue that needed a majority vote for approval. A total of 43.5 percent of eligible voters cast ballots on the issue.

The Marshall County Commission will now have to decide if it will try to pass another bond issue in the future or to remodel the current building to update the facility to meet state jail and 911 center requirements.

The commission did make a decision in November to no longer house inmates at the jail in the Courthouse. The county signed a contract with Brown County to take inmates at $85 per day. Sheriff Damian Bahr said that the local jail is so old and out of compliance that something had to be done.

ISG Architects of Sioux Falls was also hired in August to do a site and facility evaluation and assessment of the Courthouse.

Number Four Marijuana Legalization Voters made a decision in

Voters made a decision in the November election that could have a variety of implications in the future on both the state and local level.

Constitutional Amendment A was approved 53-47 percent and will allow the state to legalize, regulate, and tax marijuana for people age 21 and older. The amendment also directs the state legislature to pass laws regarding hemp and ensuring access to marijuana for medical use.

City councils will have control over whether or not the selling of marijuana will be authorized at a local level, and officials have begun those discussions. However, a lawsuit filed by Pennington County Sheriff Kevin Thom and South Dakota Highway Patrol Superintendent Rick Miller and backed by Gov. Kristi Noem questions the constitutionality of the voter-approved amendment and is still pending.

Experts say it is just a matter of time before the Emerald Ash Borer arrives in Marshall County, and the City of Britton has declared war.

The ash borer has made its way to the southern part of the state, and once ash trees are infected they will die. A majority of trees in northeast South Dakota communities are ash trees, so everyone will be affected at some time in the future.

Once infected the survival rate for ash trees is zero, and they also become very brittle and dangerous to remove. Trees can be treated before being infected but that is an expensive option. That’s why Britton has become proactive and has begun taking down the ash before the pest arrives.

Public Works Supervisor George Flanery said there are over 850 trees just on city boulevards that need to be removed and so far about 280 have been taken down. He hopes that a mild winter will allow additional trees to be taken down in early 2021.

The year 2020 marked the end of long careers for a number of county residents.

Two men who passed away in 2020 had quite an impact on the Marshall County area during their lifetimes.

Hugh Schilling, the chairman of the board of Horton, Inc., died at the age of 95. Schilling was responsible for building a manufacturing plant in Britton that has become a mainstay of the community. Schilling was also very community-minded and invested heavily in the community, including contributions to the swimming pool, library, Hugh Schilling Football/Track Complex, and the Britton Area Event Center.

Another man who left a significant impact on Marshall County was long-time sheriff Dale Elsen. Elsen passed away from cancer at the age of 64 after serving as sheriff for 37 years. People from around the county and law enforcement personnel from across the state gathered to honor Elsen in a “Final Patrol” through the county.

Tyler Bush, a senior at South Dakota State University, earned top individual honors in the National Livestock Judging Contest in Louisville, KY. Bush became only the third individual in the history of SDSU to claim a national title in the 120-year history of the event.

Miss Langford Chesney Olson was crowned South Dakota’s Snow Queen in January. Olson is the third Langford representative to be selected as the state Snow Queen, joining Rebecca Erickson in 1972 and Gayle Mydland in 1974.

Britton-Hecla was up nine students at the beginning of the school year to boost the total enrollment to 426. Langford Area numbers were up seven to a total of 219.

Langford Area is facing a challenge with its football program with just a total of three boys in grades eight and nine playing the sport. The lack of numbers is forcing the school to look at a possible football co-op and a public meeting will be held to consider options available on Monday.

As usual, there was plenty of special recognition sent Marshall County’s way during the past year.

Colin Frey and Alyssa Keough were selected as Langford Area homecoming royalty, and Trevor Zuehlke and Delaney Pruitt reigned over homecoming at Britton-Hecla. Frank Farrar became the longest living South Dakota governor at age 91 and has been a former governor longer than anyone in the state, being elected to the office at age 39.

Claremont native Curt Cutler was named to the South Dakota Amateur Baseball Hall of Fame. He joins father, Keith, and brothers, Frank and Sherm, as Hall of Famers.

Named to the Journal’s All-Area Academic Team were Levi Boyko, Jaden Jenkins, Chase Mundt, Nick Nelson, and Emma Storley of Britotn-Hecla and Ashley Gustafson and Chesney Olson of Langford Area. Nelson and Olson were also among the Best and Brightest in the state for academic achievement.

Cole Fosness of Britton-Hecla, and Langford Area’s Ady Dwight, Mallory Miller, and Colin Frey were named to the Aberdeen American News All-Area Basketball Teams and Dwight was named the Player of the Year. Dwight was a firstteam All-State pick for both basketball and volleyball. Langford Area’s girls basketball team advanced to the SoDak 16 for the first time.