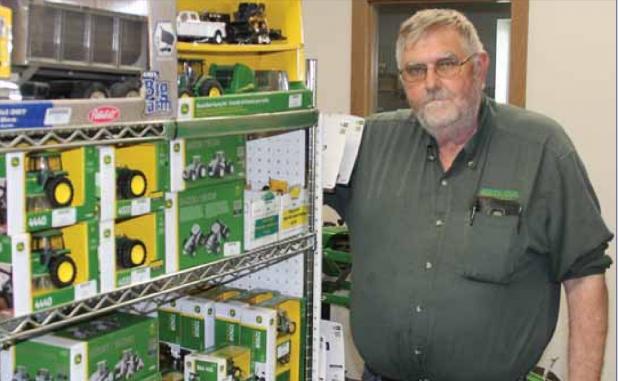 Long-time employee Randy Damgaard is the only person to have worked in all three build ings occupied by the John Deere dealership in Britton spanning over four decades.

An open house for the new Green Iron Equipment building located just west of Britton will be held from 1-5 p.m. on Thursday. The new $3 million building nearly triples the space of the old facility that will be used for storage. The expanded service area, right, is the crown jewel of the new facility.

Green Iron Equipment of Britton will show off its’ new $3 million building during an open house on Thursday, and helping conduct tours will be Britton native Randy Damgaard who has witnessed the progress of the implement company first-hand for nearly 50 years.

Damgaard is the only person to have worked for the business in all three of its locations – the former Thorp Auto Company building on Vander Horck, the structure built on the present site in 1980, and now the new facility.

The open house is scheduled from 1-5 p.m. at the building located on SD Highway 10 just west of Britton. Tours and refreshments will be provided.

“We will have hand sanitizer and masks available and take really small groups on the tours. We are not going to do a Sturgis thing,” said Damgaard, “and want to be really careful.”

The new 29,100 square foot building is state-of-the art and offers a stark contrast to what agriculture was like when Damgaard first began working for the company on July 23, 1973.

“When I started they used four-row planters and planted rows 38 inches wide,” said Damgaard. “Now the planters are up to 120 feet wide and can plant 54 rows 20 inches apart. You can also accurately plant corn up to 10 miles per hour where before you could only go 3.5-4 miles per hour.”

He also remembers one of the owners of Thorp Auto hiring a “good” farmer to plant his land located next to the road so that the rows would look nice and straight. Now GPS allows all of those rows to look like a “picket fence.”

The John Deere dealer has also grown with the times, serving producers in the Marshall County area since 1932 when Thorp Auto Company took on the John Deere implement franchise and moved to the Vander Horck location in 1939.

When Walton Thorp passed away in 1960 Jim Miles and Hank Prchal continued to operate the business.

Damgaard came on board in 1973 and he recalls that John Deere had been wanting the Britton location to construct a new building or to modernize its facility. In 1980 Mike Forrester came on the scene.

Forrester had been a territory manager for John Deere out of St. Cloud, MN, and he, along with partners Harold Slenden, Jim Peterson, and Ron Motl, bought the business and built a new building in 1980 when Marshall County Equipment was born.

Forrester managed the business until he retired in 2013 and Marshall County Equipment became Green Iron Equipment, one of six stores in a chain based out of North Dakota.

Through the years Damgaard has been involved in nearly all aspects of the business. He started in the parts department, worked in the service department and served for a time as service manger, spent some time in the accounting office and as a store support person.

“The big joke was that I was a CMS – Crisis Management Specialist,” said Damgaard, who did take a couple of years off during his tenure. “I did the things that nobody else wanted to do. Now I’m a dinosaur. There are none of me in Green Iron.”

But what Damgaard epitomizes is local service, something he points to with pride as being the hallmark of the longtime Britton business.

“Our employees are all from the local area and get involved in their communities, and local is who we are. We’ve had the same customers for years and years, and it’s working with those people that is the most rewarding thing.

“The people I work for are not necessarily the peo ple above me, but the people who come in the front door,” stressed Damgaard. “Some of them are fourth generation and I know where they live and in some cases know the name of their dog.”

The new facility takes that service to a new level. The service area is 120x150 feet, which compares to about 45x80 in the former building. The shop doors are 20 feet high and 30 feet wide to accommodate the bigger equipment and there is a drive-through bay. An indoor crane also makes it easier and safer to work on equipment. A 3,600 square foot wash bay is also attached to the north side of the service department.

“I think the thing I’m most proud of is the shop itself,” said Manager Sam Smith, a 20-year employee. “It really brings an element to the service department that the guys can be proud of, and it’s a nice place to work, more comfortable, and safer. It also gives us the capabilities of doing more things faster for our customers.”

The bigger shop has also allowed the business to hire additional employees. There are now nine service technicians among the 17 full-time employees, plus two corporate employees who will spend most of their time in the new building.

“The biggest change I have seen is technology, whether it’s a tractor or combine, lawn mower, or satellite guidance system, technology has taken over,” said Damgaard. “And no matter what you buy, service is what makes the world go round. You have to have competent service people with the know-how and backing behind it. That’s also the beauty of having six stores. We can transfer parts and inventory between them.”

The building was also constructed with the future in mind, using all the latest technology while allowing room for expansion. It all boils down to a commitment to the area by Green Iron Equipment.

“I think putting up a new building points to our commitment to the area,” said Green Iron CEO Tom Joyce. “Our customers are dedicated to us, and we needed to repay that loyalty.”