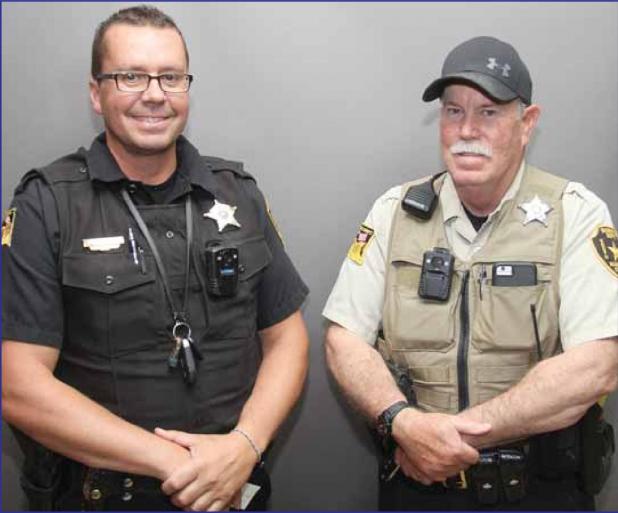 Damien Bahr, left, assumed his duties as Marshall County Sheriff on July 1. Brian Bard, right, had served as the temporary sheriff following the death of Sheriff Dale Elsen in May.

For the first time in 37 years there’s a new sheriff in town.

Groton native Damien Bahr was sworn in as sheriff of Marshall County on July 1 after being appointed by the Marshall County Commission to serve out the term of Dale Elsen. Elsen, who was first elected sheriff in 1983 and was the longest current serving sheriff in the state, passed away from cancer in May.

Brian Bard, who retired after 20 years with the South Dakota Highway Patrol, had been serving as the temporary sheriff since Elsen’s death and will continue to work as a deputy to help Bahr with the transition. The sheriff’s position will be up for election in November of 2022 with Bahr’s appointment through Jan. 2, 2023.

The new sheriff knows he is following in some pretty big footsteps.

“In visiting with people, they wish me the best of luck but also tell me that I have some huge shoes to fill,” said Bahr. “When they think about the sheriff’s position they think about Dale, and I like that. I knew him and respected him. I worked some cases with him and it was amazing to see a working sheriff doing the things the deputies were doing plus running an office. It was pretty impressive.

“One thing I’ve noticed while driving the patrol car is that everybody waves, and you usually don’t see that. I really think that goes back to the respect that Dale had in this office.”

After graduating from Groton High School in 1996, Bahr went to Mitchell Tech to study heating and cooling. But after a year he changed direction and attended Alexandria Tech for law enforcement.

While with Brown County, Bahr worked as the canine narcotics dog deputy, he served two years on the Brown County Drug Task Force as a drug investigator, and he spent 10 years in general criminal investigation, investigating all felonies and deaths in the county.

During that time he met and worked with Elsen and Bard on occasion, and when he had an opportunity to take on a new challenge as Marshall County Sheriff he decided to give it a shot.

About a year ago Bahr had actually decided to get out of law enforcement. He and his wife, Erin, have a sophomore son and seventh grade daughter, and he felt he needed to spend more time with his in Susu community have been working very hard.”

The story really began decades ago when Lynn, founder and chairman of Elizabeth’s Library International (ELI), was growing up in Britton. She always loved learning and spent many happy hours in the local library reading books on a variety of subjects. When the librarian, Frances Kann, realized that Lana had read almost all the books in the library, she made arrangements with the State Library system to send books to her on a regular basis.

“I remember so well my excitement, the day the first cardboard box arrived at my home and I carefully unpacked the books – one by one,” remembered Lynn. “Every few weeks for many years, I would send a request list to the State Library, and shortly after a new box would arrive at my home – opening the world to me. I never imagined that one day, I’d be part of an organization sending cardboard boxes of books around the world to start libraries where there are none.”

Fast forward to the Britton challenge, a forerunner of things to come for the Zambian village.

“In response to the stories in the Journal about Susu hoping to build a library, the Britton community contributed $4,300,” noted Lynn. “The cost of the land and all legal fees for the new library was $ 4,500.”

The community immediately started clearing the land for the planting of crops and a site for the library, and other ELI supporters funded the purchase of seeds, fertilizer, and a small but powerful water pump. Another donor funded the purchase of 100 orange trees and Lynn’s 70th birthday fundraiser launched a goat herd. Another pair of twins was born a few days ago, so now there are 10 kids and more arriving soon.

The Susu community has carefully tended and grown all the agricultural projects - knowing they will provide needed food for the villagers and a significant portion of the library operating costs once it is built. The farmers continue to diversify their crops and have also added banana trees.

The ELI team visited Susu last July to see the progress first-hand and to dedicate the site of the future community library.

“The people from Susu and surrounding villages shared their excitement about building a community library and the impact it would have on the education of their children,” said Lynn. “They have dreams and hopes for their children to have a different future.”

Lynn returned to her home town last fall to talk to area residents about the impact they were having in Zambia.

“It was truly a joy to return home and report on Britton’s investment in a far away community. A village is being transformed and now it is time to build the library. The generous Britton community again responded, and ELI received $15,000 of the budgeted $20,000!”

It was originally planned to use water from the village well for construction purposes and to provide drinking and sanitation water after the library was built. For several reasons, that option was not possible. However, ELI was invited to apply for a PayPal Gives grant.

“The story of Britton’s generosity touched the folks at PayPal Gives and they funded the borehole drilling and solar powered pump,” said Lynn. “The award committee was very impressed with the progress of the agricultural projects, and the community’s commitment to financially supporting the future library and the expanding mobile library program. ELI received a grant that funded the drilling of a new borehole and purchased a large capacity storage tank, pump and solar panels.”

The borehole is working well and construction of the community library started in early June. The construction is being done by a professional team, but Susu residents and their cattle-drawn carts contribute hours of hard physical labor, moving and shoveling dirt and rocks.

“It is their library, but their heart is to bless many people with this amazing treasure,” added Lynn. “They know that many people will be coming to Susu to use the library and the roads are in very bad condition. So, Susu leaders met with leadership from other nearby village and organized a major road repair effort.”

Once the library is functioning well, the community has a dream to build a high school, as there is no high school in the immediate area. All village students qualifying for high school, with parents that can afford the school fees, must attend a faraway boarding school. Susu also plans an inexpensive boarding dormitory for girls, so more parents will be willing to educate their daughters.

“Susu is a remarkable community with wise leadership,” noted Lynn. “They pray and hope that this library will be the impetus for an educational center for the entire area. Knowing that teachers and students will come from long distances, they have requested resource and reference materials in all subjects. They plan to build a small guest house to accommodate these visitors.”

Susu’s successful agricultural projects may become models to train future farmers. They are growing the goat herd and introducing new breeds to increase milk production. And, there is still space on the land for a poultry project.

A California Church funded the purchase of a motorcycle for the mobile library program. Ten more villages will soon be included on the route and thousands more children and adults will have access to quality books and educational resources.

“Britton’s investment in this community has provided opportunities for economic growth and education that will impact generations to come,” concluded Lynn. “Thank you, Britton, SD. The ELI team will travel to Susu next year to dedicate the library, and Susu hopes its friends from Britton will join the celebration.”

“I know it’s not always about pulling people over and writing a ticket. A big part of this job is about helping people on the side of the road or talking them through hard times.” ----Damien Bahr MC Sheriff