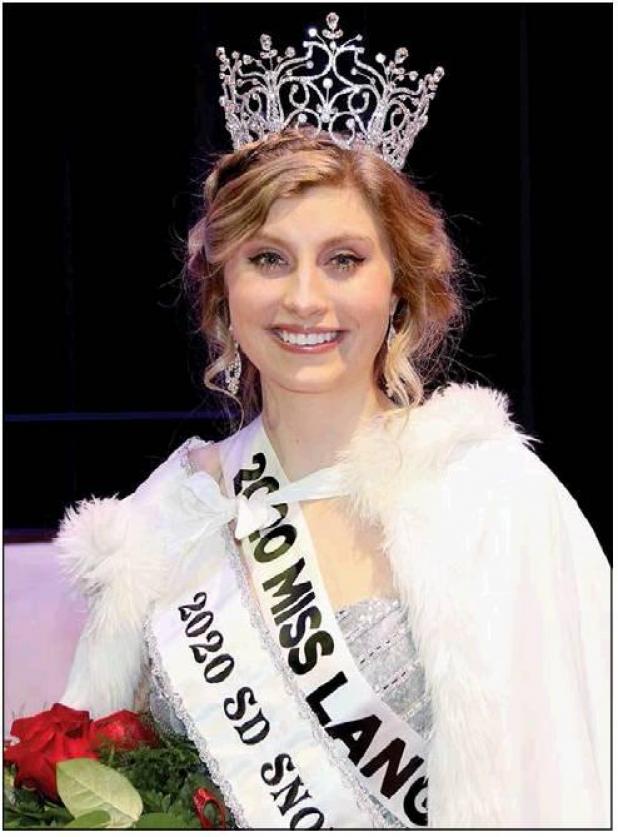 Miss Langford Chesney Olson, daughter of Travis and Lisa Olson, was crowned the South Dakota Snow Queen at coronation ceremonies in Aberdeen on Saturday. Olson is the third state Snow Queen from Langford and the first since 1974. (Bremer Photography Photo) 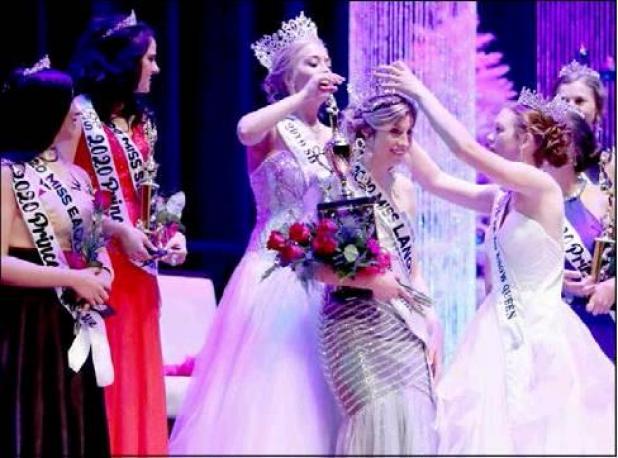 It is fitting that one of Chesney Olson’s lasting memories of being crowned South Dakota’s 2020 Snow Queen will be a bunch of Langford residents screaming in the Aberdeen Civic Theatre.

She points to her family and her community as the foundation of her development as a person, and the reason she was selected from among a field of 30 girls from around the state on Saturday.

“It was in complete shock when they called my name,” recalled Olson, a Langford Area senior and the daughter of Travis and Lisa Olson of Langford. “Any one of those 30 girls could have been picked, and I did not expect it. There was a section of Langford people there and they were just screaming. It was really overwhelming.

“We are just such a tightknit community and everyone cares for one another and supports one another,” added Olson. “There was just so much love and support coming from everyone. The gift I received of being a part of my community and my family is what pushed me through. I could not have been shaped into the person I am if not for them.”

Olson is the third Langford representative to be selected as the state Snow Queen. Rebecca Erickson wore the crown in 1972 and Gayle Mydland was crowned in 1974.

While Olson may have been shocked, her selection as the state queen was not surprising to those who know her best.

“Chesney is one of those students that everyone likes to be around,” said Langford Area Superintendent Monte Nipp. “She’s smart, friendly, talented, conscientious and organized. Chez gives 110% to everything she is involved in. She is one of our Teen Teachers and does an excellent job serving as a role model for our elementary students. They all love her!”

Hupke, the chairman of the Langford Area Snow Queen

Festival, is proud that the state will get to know the Langford Area Snow Queen.

“The qualities that Chesney has, and why she was picked as the Queen include her amazing heart, her poise, her kindness, her brains and beauty, and her passion to always give 100% at everything she chooses to do,” said Hupke. “She is the type of lady that radiates poise, beauty, and kindness. The community of Langford knew she was a Queen but now the state just validated what we already knew. We are so proud of her and can’t wait to watch her on this amazing journey.”

Ironically, Olson had really not planned on even participating in the Langford Area Snow Queen Festival until just a couple of weeks before the Nov. 17 event.

“I had always considered it, but didn’t go out for Junior Snow Queen as a freshman and hadn’t signed up this year. Then some people in the community and family members really encouraged me to do it a couple of weeks before the papers were due, so I decided to go ahead.”

“If we can put ourselves in someone else’s shoes and understand what they are going through, then we can understand the world in a whole new way.”
--Chesney Olson

Olson admitted that she really didn’t know what to expect during activities in Aberdeen last week, but she did get some good advice.

“The best advice I got from almost everyone I talked to was to just be myself and have fun, and that’s what I tried to do.”

Activities began on Thursday with introductions and a Welcome Tea with parents. Candidates then participated in some icebreakers and games to get to know each other. That was followed by trips around town to thank various sponsors, a rehearsal, supper, and rolling skating. Back at the hotel they all packed into one hotel room and watched a slide show about the reign of the 2019 Snow Queen Aleah Steger before a surprise introduction with judges.

On Friday the girls went through interviews and attended workshops and learned and practiced what to do on stage. They also had five-minute interviews with judges. The day was capped off with a banquet and ball with parents and family members. Queen candidates also had to answer judges’ questions in front of the crowd as well as explain their community basket.

“We were asked to put together baskets that represented our community,” said Olson. “Mine was kind of a movie theme because I really like movies. Since our town is so well known for our musicals, I put in movies of the plays I have been a part of including “Little Mermaid” and “Beauty and the Beast.”

“I put in a basketball and football movie since our school is known for really successful boys’ football and basketball teams. I added some of Diane Hoines’ fudge which is a pretty well-known thing around town, and we also have lots of ladies who like to bake and teach us how to bake. Then I put in a box of popcorn because that is at most of our events, and those events are a big part of our community.”

One thing that surprised Olson was how quickly the snow queen candidates became one big family.

“There were 30 of us girls and I made 29 friends last weekend. It was really incredible. I really had not expected to become so close with so many of them, and they really became like family. It’s hard to even describe how amazing these girls were, and they were so accepting and understanding of everybody.”

“This is definitely a oncein-a-lifetime opportunity that not many people get, and I hope I can help people gain a better understanding of perspective and empathy. If we can put ourselves in someone else’s shoes and understand what they are going through, then we can understand the world in a whole new way.”

Olson wants to put particular emphasis on what she sees happening with her peers and social media.

“Bullying and so many things go on with social media, and I think we need to have empathy for one another and see things through each other’s eyes. If we try and be understanding of everyone the world will be a much better place.”