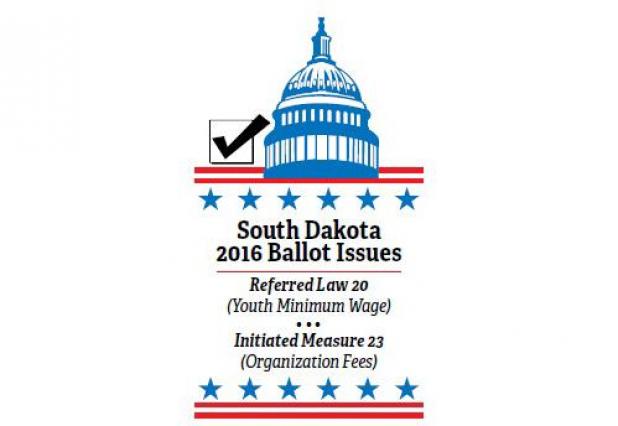 Wed, 11/02/2016 - 2:47pm
Maricarrol Kueter
Two measures on the 2016 ballot would enact workplace changes in South Dakota.
Referred Law 20 asks voters to decide if a law setting a lower minimum wage for workers under 18 than for adults should go into effect. Initiated Measure 23 would allow labor unions to charge fees to non-members for the work they provide in negotiating contracts and handling other services.
In November 2014, South Dakota voters approved raising the state’s minimum wage from $7.25 to $8.50 an hour. A few months later, the state legislature voted to set a lower minimum wage - $7.50 an hour - for workers under 18. Opponents of that move petitioned to refer the matter to the state’s voters.
In approving the youth wage, some legislators argued that authorizing a separate wage scale would help small businesses by permitting them to offer a lower training wage to young workers who don’t have extensive experience. In addition, if all workers earned the same wage, employers would be more likely to hire adults, lessening the opportunities for teens to enter the workforce, they said.
But those behind the referral say the legislature disrespected the will of voters in tinkering with the minimum wage.
“Proposing and voting for a lower minimum wage undermines the will of voters and disrespects our state’s long-honored process of direct democracy,” said Augustana College economics professor Reynold Nesiba in an email.
Nesiba said a higher minimum wage has not negatively affected the economy as some had warned. The labor market in South Dakota has continued to grow even with the minimum wage hike, he said.
Initiated Measure 23
The words labor unions do not appear in the text of Initiated Measure 23. It says only that the proposed law would give certain organizations the right to charge fees.
But proponents, who are also labor union representatives, say the government should not be able to force any organization, including unions, to provide services for free.
Jason George, an official with the International Union of Operating Engineers, said currently people who work in a business that has a union contract can decide not to pay union dues or fees. They still get the benefits of the contract, under federal law.
“Think about it this way,” he said in an email. “Many people belong to a health club where they pay a monthly fee to be a member of the club. If someone decides not to pay the fee, eventually, they are barred from using the services of the club. That’s the way commerce works. You get something, you have to pay for it.”
Unions, he said, can’t prevent someone from using their services. South Dakota is a right-to-work state, meaning you cannot be required to join a union in order to be hired for a job.
But, George said, the initiated measure would allow unions to charge what are called fair-share fees, an amount less than the cost of a full union membership, to non-members who work in firms with union contracts. The amount of that fee would be determined by calculating the percentage of union members dues that are spent on the negotiation and enforcement of contracts.
“I would hope that South Dakotans, even if they don’t like unions, would agree that everyone should be treated fairly,” said George.
Opponents say the initiated measure goes against the intent of the right- to-work provisions of the state constitution.
“Right to work addresses being forced to join a union,” said David Owen, president of the South Dakota Chamber of Commerce and Industry, in an email. “The payment of a fee without a membership versus being required to join the union is a distinction without a difference.”
Owen said unions could instead choose to negotiate contracts only for their members and leave non-members to negotiate their own wages and benefits. In addition, the vague wording of the initiative is confusing and could end up in court challenges, he said.
“People choose not to belong to unions for their own reasons. Forcing them to pay money to the unions hasn’t been legal since the 70’s and would render the right-to-work system meaningless,” Owen said.
Ten questions are on the Nov. 8 general election ballot. You can learn more about the various ballot questions at the S.D. Secretary of State’s website.