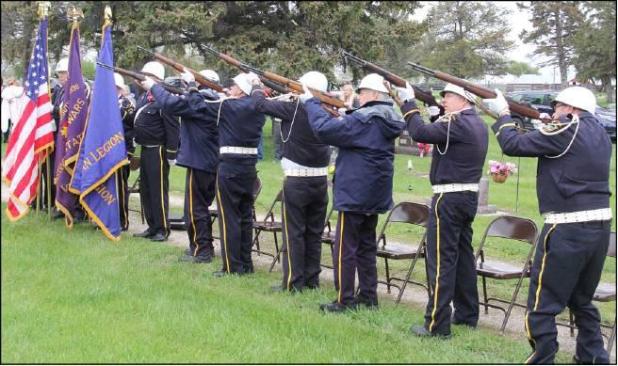 Members of the Britton Color Guard fired a salute to deceased veterans at the Britton Cemetery as part of Memorial Day activities on Monday. Programs were held around the county to honor those who gave the ultimate sacrifice.

Due To March Storm

The request is for FEMA assistance to help with repairs for damage done to both public property as well as to individual homes and businesses. A preliminary damage assessment indicates about $43 million in damage to public infrastructure in 58 counties and on three reservations. The preliminary damage assessment for individual assistance is about $3 million covering 16 counties and three reservations.

In a letter to President Trump, Noem wrote that “a historic severe winter storm of rare intensity” began in South Dakota March 13. She said the snow was followed by a rapid snowmelt and flooding. The severe weather continued through April 26.

“The winter weather and flooding caused many issues with public and private infrastructure throughout the state as well as the extreme emotional toll on impacted citizens,” wrote Noem. “Citizens continue to experience ongoing issues with their homes and businesses because of the flooding.”

Noem noted the severe weather impacted all parts of the state. The governor wrote that people had to be rescued from their flooded homes; city wastewater treatment plans and sewage lagoons were overwhelmed from high water; highways, ranging from the interstates to the county roads, were closed and damaged by both snow and water; power outages occurred in different parts of the state; and, the state’s agricultural industry was impacted by damage to fields and livestock.

In her letter to the President, the governor stressed that the impacts of this storm will be felt for a long time. She added that federal assistance is needed.

“South Dakotans pride themselves on being a hardy group of citizens, and we pull together to help one another, especially in times of disaster,” Noem wrote. “However, with the availability of federal assistance, combined with state, local, and voluntary assistance provided, it will help individuals, businesses, and government inch closer to recovering from this disaster.”

South Dakota currently has six open Presidential disaster declarations for other events and is working with FEMA on the recovery process for each of those disasters.