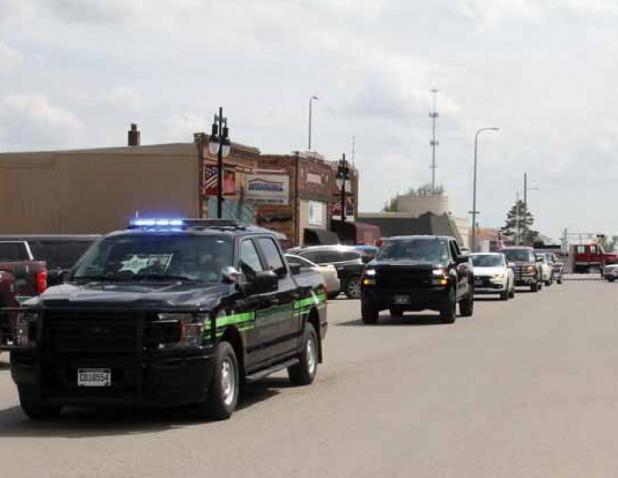 This message – Thank You Sheriff Dale Elsen, Dedicated Public Servant - appeared on the Strand Theatre marquee on Friday during the law enforcement procession that included law enforcement personnel from across the state.

A 1973 Hecla High School graduate, Elsen joined the Marshall County Sheriff’s Office as a deputy sheriff at the age of 21. He was elected sheriff in 1982 and took office in 1983, serving the county in that capacity for 37 years. Elsen was the longest current serving sheriff in South Dakota.

The long-time sheriff presented drug, alcohol and crime prevention programs to various organizations. He was an avid Chicago Bears fan and enjoyed spending his free time helping on the farm. Most people work to live, “Dale lived to work.”

Following are tributes from some of the people that Elsen worked with and helped throughout his 43-year law enforcement career.

Micah Small: Dale, you will be missed. I appreciate the time I was able to work with you. You were always kind to me. I was excited to be in your corner once again. Both the town of Britton and Marshall County will be a little dimmer having lost the light that was you. My father respected you, and so did I. Rest in Peace officer, and thank you for your service to my home town and county.

Karen DeVine: Sheriff Elsen was a true law enforcement officer and deeply dedicated to Marshall County. I speak for myself and my late husband, former Marshall County States Attorney Myles DeVine, who worked with him for 25 years.

Paulette Petersen: I am deeply saddened by Dale’s passing. I had the pleasure of working with Dale during my tenure at the SD State Forensic Laboratory and he was one of the very truly professional individuals who not only “worked” the case, but cared about the victim. Godspeed, my friend. You were one of the best.

Stan and Grace Wegleitner: Stan worked with Dale for about 20 years. Dale called Stan “Dad” and they had a mutual respect for each other. They were friends. After Stan retired, Dale would stop by every once in awhile to just chat and check up on us. He served the community for 40 years dealing with some very difficult situations, but handled each one professionally. He will be missed by the whole community.

Ben Smith: A true leader that I looked up to. Thank You, Dale, for giving me the chance to become a Deputy after the Air Force in 2005. I will never forget our conversations. You gave me direction that I still speak about after many years. Great Man!!

Chad Locken: Dale was truly an exceptional sheriff. Dale was committed to his community and making it a better place. He left a lasting impact on the community and will be missed by many. He was a proud grandfather as well. I recall several times when Dale would come into my office to talk about a weekend visit with his grandchildren and show me the latest pictures.

Eugene E. Dobberpuhl: I am deeply saddened by Dale’s passing. I worked with Dale for many years on a professional basis. My association with him led me to two conclusions. Dale was an outstanding sheriff and he was also an outstanding person.

Michele Kant Caspers: So kind and fair, he was what every Sheriff should strive to be. There will never be another like Dale.

Rick Olauson: Mentor, counselor, teacher, friend...just a few words that describe what Dale was to me. I came out of the Air Force with the mind set of becoming a teacher and coach. Next thing I know Dale hires me as a dispatcher which led to a deputy spot and then he encouraged me to apply for the patrol. No matter where he was or what he was doing, if I called or stopped in he always made time to talk. I believe he was that way with everyone. I will remember him as a loving husband, father and grandpa, but mostly as my friend and brother in blue. Rest easy Dale, you’ve earned it!!

Kent & Sarah Holland: Dale organized and volunteer coached the youth flag football in Britton for years! I worked with him at Punt, Pass and Kick competitions. His passion for helping youth speaks volumes to his character! His service to our county will be missed and was much appreciated!!

Wendy & Terry Blegen: I worked with Dale at the Sheriff’s office many years. I have never met a man who loved his job so much. He knew every single person in the county and every nook and cranny. If there was a call about an accident and the caller said it was by a big rock next to a crooked tree, Dale knew where it was! He also knew the history of the people and places of Marshall County. His vast knowledge is irreplaceable. What I admired the most about Dale was his sense of fairness and excitement for the job after so many years. He probably never got more than two nights sleep in a row, but whenever he was called, he put on his uniform without griping and showed up for the safety of Marshall County and its residents.

Todd Landmark: Everyone who knows Dale knows he was a busy working sheriff. In 1983 I took my job interview in Dale’s patrol car and helping photograph a crime scene. As we got back to the sheriff’s office Dale said, “You will start as a dispatcher and when you’re old enough you will be one of my deputies. When can you start?” Three days later I started and worked for Dale for 16 years. So many memories. Dale has changed so many people’s lives just by being the compassionate and carding man he was. Rest easy my brother, we have the watch from here!

Jill Behnke: I worked with Dale for 34 years and like every job, there were ups and downs. Happily, I can say there were more ups than downs. We were like family. And I really do appreciate it, Dale, when you didn’t growl at me when I would call you out in the wee hours of the morning or wake you up for a question or .... the list goes on. R.I.P Dale.

Kirk & Carol Moeckly: We’ll never forget the concern, caring and competence Dale showed our family when our mother who had Alzheimer’s disappeared late one night from our cabin on Clear Lake. He immediately organized a search for her which included himself, deputies, and our family members. Eventually, he even included the Tribal Police in the search which was possible because of his good relationship with the Native Americans in the area. She was found unharmed and we are forever grateful for his help that night and for faithfully watching over all of us in Marshall County for so many years. We will greatly miss him.

Josh Boll: Thank You Dale for your years of service as County Sheriff and being a friend to so many. I worked with Dale for close to six years when I first started law enforcement. We had a great working relationship and he would always start out by greeting me by saying, “what’s up today young man, what you going to get into today?” Dale could be serious, as we all can in this profession but he had a kind-hearted side also. He was a friend to many. Rest In Peace Dale, we’ve got it from here. Rest easy my friend.

Londra Fleming: Dale was very helpful to my family in the past few years. He was a friend, a professional law enforcement officer, but more importantly, a kind human being. He will be missed.

Regina Honer: I first met Dale on Main Street in Britton 23 years ago. I had locked the keys in my car with my infant daughter in the car, while the car was running. Yep, sleep deprived new mother. To say the least I was beside myself. Dale was coming out of the building across the street and he came over to help me. I told him he could break the window just PLEASE open the door. He laughed and within minutes it was opened without breaking and windows. Since then I have worked with him on and off for many, many years. He was a great Sheriff and a great man. I will miss his stories and his friendship. He will be greatly missed. Marshall County will not be the same for sure. Our hearts are broken.