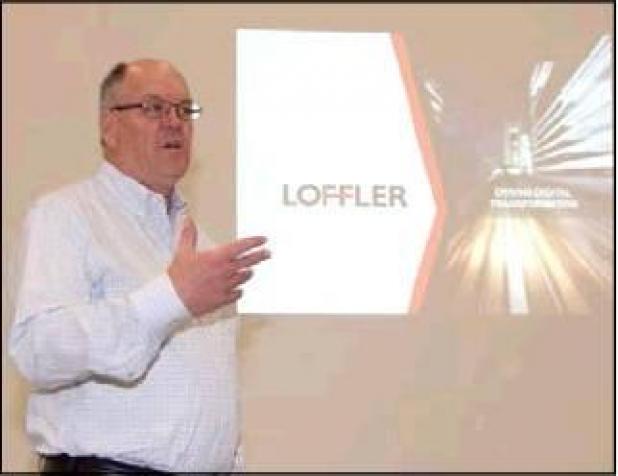 It’s all about “keeping your information from getting to the bad guys.”

That was the message delivered by Mike Clark of Loffler Security Solutions of Bloomington, MN, to a group of local business people at the Britton Area Event Center Thursday morning. The business cybersecurity workshop was sponsored by GROW SD, Glacial Lakes Area Development (GLAD) and the City of Britton.

Clark, whose company has an office in Aberdeen, said that the challenge for businesses and individuals continues to grow and that people need to take the threat seriously.

“There are more bad guys out there and they are really smart,” stressed Clark. “They keep coming up with new things every day. Everybody knows it’s out there, but we need to definitely do something about it.”

One of the problems is that people sometimes think that their information is not valuable to anybody else.

“People think their information isn’t worth anything, and maybe that’s true, but the bad guys want to hold you hostage,” said Clark. “Remember when the Internet used to be fun? Now you have to worry about everything you do. There is nobody out there that is not vulnerable. It’s important to not underestimate the threats and think when, not if.”

Clark said that businesses and individuals are most often hacked through emails.

“Nowadays the bad guys are so good at sending emails. It’s crazy out there. And the threat always changes. A good rule to follow is to not download anything.”

Clark noted that “humans are your weakest link in terms of getting hacked,” and he stressed the importance on not opening emails that are unfamiliar or seem strange. He said a security training program called KnowBe4 can be purchased at a reasonable price that allows companies to send suspicious emails to employees to help train them on how to recognize potential security problems.

He also stressed the importance of having a physical box on site as well as information stored in the cloud for backup with backup being done at least once a day.

“Just because you have a backup doesn’t mean it’s safe because the bug has likely been there for up to six months before it shows up,” said Clark. “But you should not be afraid of the cloud. It works and its security is unbelievable. If your data is in the cloud it’s almost impossible for other people to get it.”

Clark said passwords are also important and an area frequently neglected. He said an ideal password contains 14 characters with upper and lower case letters and a symbol and takes much longer for a hacker to get that password.

Security programs are a necessity. Clark said Norton is fine for home computers but he felt a higher level program should be used for business applications. He stressed that the cybersecurity threat can never be totally eliminated, but by taking basic steps the chances of staying safe are substantially higher.

“Cybersecurity really only became an issue in recent years, but it has grown rapidly,” stressed Clark, “and I’m afraid it’s going to get worse before it gets better. But we will get better and we’ll get smarter and hopefully we will eventually close the gap.

“But the work is never done. We have to continually improve and find newer, better, and more cost-effective solutions and always be adapting to changes on the threat landscape.”