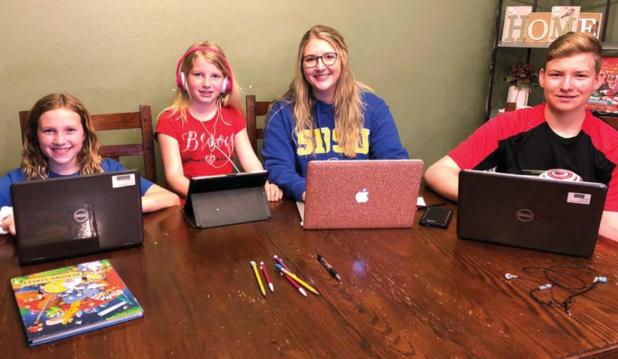 The Ray and Marci Effling family of Britton is doing home-schooling times four while schools are closed due to the COVID-19 pandemic. From left to right are fifth grader Emily, first grader Olivia, fourth-year SDSU student Lyndsey, and sophomore Carter.

Students, teachers, and parents are all rising to the occasion when it comes to continuing education for Britton-Hecla and Langford Area youth.

Administrators at both schools said there have been some bumps in the road, but for the most part things have gone tremendously well during the first week of forced in-home education due to the coronavirus threat.

Schools have not been in session since March 13 and will continue to be closed at least until May 4. Both Britton-Hecla and Langford Area staffs started holding organized class sessions with students at home beginning last week.

“There were some speed bumps, and it was a matter of everybody getting their feet under them,” said B-H High School Principal Carrie James. “But we are all learning together and I think that helps a lot. I was nervous about how it would all go, but everybody stepped up and I’m so proud of my teachers. In one of my emails I told them that they had been asked to jump off the high dive, and they all did it without hesitation.

“One of the most challenging things has just been finding a balance of the right amount of work to assign kids,” added James. “I think that’s true for teachers and parents.”

“Getting parents used to the variety if they have kids in multiple grade levels has been challenging, but the kids are really the ones that lead the charge,” said B-H Elementary Principal Kyla Richter. “They figure it out quickly and are excited about it. I think it’s been a smooth transition and has gone very well.”

B-H Superintendent Steve Benson said the school’s newnormal will be a continuous work in progress.

“We’re obviously learning things every day,” said Benson. “But overall the staff has done a great job of addressing the needs and making adjustments as needed. We know it’s a marathon and not a sprint.”

Benson said he has been pleasantly surprised with the way the entire community has jumped on board.

“I think the biggest surprise to me was how accommodating all the parents and everybody have been. They kind of jumped on this right away and accepted what needed to be done, and I think that’s why this thing rolled out pretty smoothly. We have a good team that communicates very well with each other.”

Langford Superintendent Monte Nipp has a similar story. “This first week was a

“This first week was a learning experience for everyone and I expect it to get better every week,” said Nipp. “We’re moving in the right direction. Is it perfect? No. We would rather have kiddos faceto-face in our classrooms, but we know we can’t. But technology is just going to be included more and more.”

Langford Area sent out its second week of learning packets, along with items from cleaned out lockers and desks, on bus routes on Monday, but Nipp thinks that will be the last time that packets are distributed.

“We started off combining online with packets, but I think next week we will move to paperless with everything online. It seems like our big emphasis is that everybody wants to Zoom videoconference. We did that for a faculty meeting and it’s kind of like the Brady Bunch – you have all those squares on the computer screen with smiling, happy faces.” Nipp said that a few students

Nipp said that a few students do not have internet access due to geographic locations, but teachers are calling and doing one-on-one help lines. Venture Communications has also provided free internet to families who did not previously have it.”

Langford Area has also begun providing breakfast and lunch to students and distributed food to 42 students on Monday. There is no formal application or income guideline. Students must call the school to be included. Students living in Langford must pick up bags containing lunch and breakfast from 11:30 a.m.-12:30 p.m. on Mondays and Wednesday. The school is delivering food to a central drop-off point in Claremont, Pierpont, Roslyn, and Eden those same days.

Families also seem to be adjusting well. Ray and Marci Effling of Britton have two elementary students, one in high school, and another homebound college student, all who are doing class work on computers at home.

“Not being in the education field at all, it’s been a learning curve for me as a parent,” said Marci. “Being an older mom, getting all these apps downloaded on the phone and computers and figuring out how to use them has been my challenge. But I believe the teachers have done a good job of getting the needed apps out to us, and the two girls (first grader Olivia and fifth grader Emily) have adjusted pretty well.

“Carter, a sophomore, is pretty self-motivated and has been doing his own thing. Lyndsey is in her fourth year of nursing at SDSU, and she will be working online for the rest of her semester.”

Marci said the family has tried to keep a normal school schedule, and she has been able to help because she has taken time off from her job to recuperate from foot surgery.

With four students on computers, the family did have to boost its internet capability.

“Lindsey was trying to have a videoconference call through SDSU and sent a message upstairs to get off the internet so there would be enough power for the video call,” said Marci. “So we had to increase our wi-fi speed and Chad Hardina from Venture Communications was great and got us going the same day.”

While kids seem to have become comfortable with in-home technology pretty quickly, it’s that face-to-face contact between classmates and teachers that seems to be missed the most.

“I think the kids miss their friends and their teachers,” said Effling. “They have transitioned fairly well into school at home but definitely miss the interaction. Olivia told me about Day 3 that she really missed her friends.”

James said the staff is also really missing the kids.

“The kids are such a big part of our lives for nine months, and teachers really build relationships with them,” said James. “But they are finding new ways to make connections whether it’s on Zoom or other platforms.” “Whether its relationships

“Whether its relationships at school or with grandparents or with friends, take your pick,” said Richter. “We’re people and we want human contact. It’s been challenging to be kind of isolated.”

Benson said any future plans for the end of the school year are still up in the air.

“We’re kind of in a holding pattern. Obviously, we don’t know what is going to happen,” said Benson. “Our hope is to still do graduation, but we’re kind of at the mercy of what is decided at the state level. I don’t see much changing by the middle of May, and right now we’re just waiting and hoping.”

All administrators stressed that making the transition to schooling at home has been a community effort.

“They say it always takes a village to raise a child, and this is a good example of that,” concluded James. “You can just feel the support and connections. Parents have jumped in and teachers have stepped up. It’s neat to see how quickly people have shifted, and it’s a great feeling to see how everybody cares about the kids and community.”

The Efflings are also looking at this time as a chance to get back to family basics.

“My 22-year-old and I were talking about how this maybe will make people a little more resilient and maybe a little more self-reliant,” concluded Effling. “She is realizing that sometimes in life you are not always in control. Families are so used to being on the go, and I think getting back to some of the basics is going to be very good for a lot of families.”