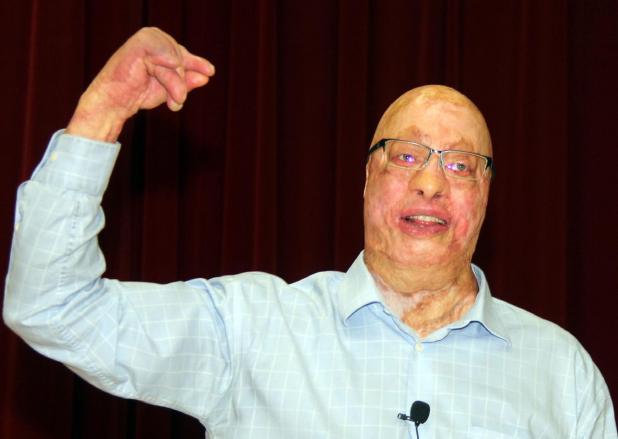 He Turned Demons Into Diamonds

In the blink of an eye Spencer Beach’s life was changed forever.

Fourteen years ago, at age 29, the Edmonton, Canada, native was the victim of a flash fire. He suffered third and fourth degree burns over 90 percent of his body and was given just a five percent chance to live.

On Monday, Beach spoke to Britton area residents, telling attendees how he turned his “demons into diamonds.”

Now an international motivational speaker, Beach gave a workplace safety and safety awareness presentation Monday afternoon. Monday evening he told his story from a healthcare perspective, stressing the importance of emotional recovery being as important to healing as the physical injuries. He also spoke to Britton-Hecla students in grades 6-12 Monday morning.

Beach was a third generation floor installer. His father taught him the craft from the time he was six years old and after high school he began working full-time. He went through some tough times with alcohol and drugs, but at age 23 he was married with a child on the way and felt like he had his life together.

April 24, 2003, began like every other day, but before the sun set Beach would be in a battle for his life. The wrong color vinyl flooring had been installed in a new home, and he was removing it. The process he used involved a chemical that loosens the glue to allow for easier removal.

He had been taught to turn the thermostat to its lowest setting (60 degrees in this case) and open doors to get some airflow to alleviate some of the heavy chemical fumes. When he began the work about 1 p.m. the outdoor temperature was 66 degrees, and when he was nearly finished about 4 p.m. it had cooled to below 60.

Beach was nearly finished when he shut the front door to remove the linoleum from behind it. When the garage door blew shut from the wind he didn’t re-open it. The fumes accumulated, and then the furnace kicked in because the inside temperature had dropped below 60 degrees.

“I heard a loud whistle and in less than a second was engulfed in flames,” said Beach.

When the furnace started it sucked in the air, and the fumes in the house, igniting the chemical. Beach recounted his desperate efforts to open both the front and garage doors to no avail. Exhausted and burning, he eventually lay on the floor and essentially waited to die.

“The fire was 2700 degrees, and my clothes were melting. I could feel the burning way deep inside me, and my skin felt like it was shrinking. After trying to get out for about 20 seconds I was completely drained of energy and wanted it to be over. I gave up.”

As he lay on the floor all he could think of was his wife and unborn child. He calls that the most important moment of his entire story.

“All I cared about were the people I loved, and if those were my last thoughts they had to be my most important thoughts. But that hadn’t been the case that morning when my job and paying the bills were more important than time with my family.”

Driven by that love of family, he tried one more time to escape from the inferno, and this time was able to open the door to the garage. Still burning, he managed to get out on the driveway before falling. An off-duty nurse helped comfort him until help arrived, but he’ll never forget that “you’re not going to make it” look on the EMT’s face.

He was transferred to a burn treatment trauma unit in Edmonton, the best of its kind in Canada. It was there that a doctor asked him if he would just prefer to die.

Beach was in a coma for six weeks, his weight dropped from 180 to 112 pounds, and he couldn’t do anything – not even blink. The realization of his situation and what he saw as a dismal future led to depression, and he wanted to die.

It was nine months before he could even move. His life consisted of pain, anger, and surgery. And he spoke about how anger becomes part of a cycle that is very hard to break.

“The question, why me, becomes very poisonous because there is no answer to it. Then it gets to blaming other people. After love, anger is really the second-best emotion when tapped into properly, but it can also destroy you.”

Then came a red-letter day that changed Beach’s life – Sept. 28, 2003 – just over five months from that tragic day of the fire. And again, it was his love for his wife and newborn daughter that made all the difference.

“Those two minutes of holding my daughter was the first time in five months that I quit feeling sorry for myself. I didn’t hold her again for three months because of the pain, but I found hope.”

Beach was still facing a very long road. He finally learned to roll over about nine months after the accident, which gave him a renewed sense of freedom.

“I stopped convincing myself that I couldn’t do anything. If I could roll to my left, what else could I do for me? It set this path forward that turned me into the guy I am today.”

Beach thanked the healthcare workers and people in his life that helped him walk down that path, and he urged local healthcare employees to make sure and include patients in the process – to make them feel part of the team.

“You can’t make them change the question – why me? But you can inspire them to find the answer and give them something to hold onto. Those workers did not give up on me, and without their help I did not have the option of surviving."