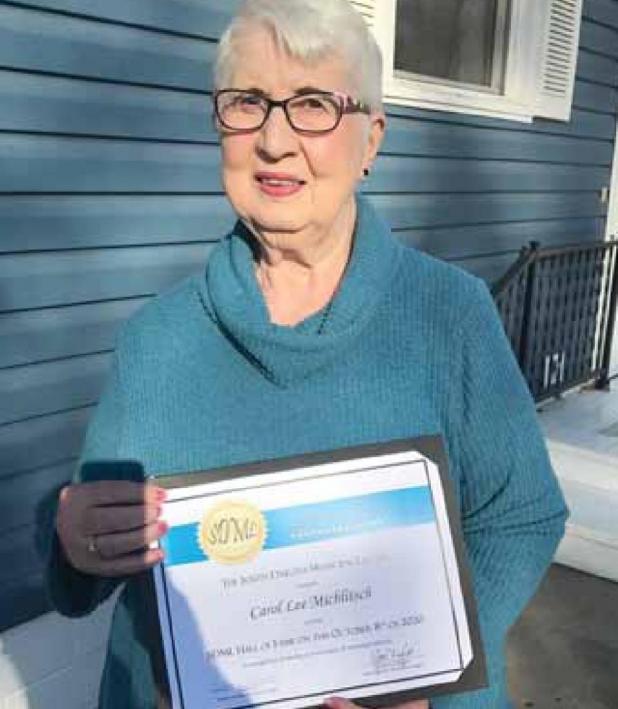 That dedication to duty was just one reason that long-time Eden Finance Officer Carol Lee Michlitsch was named to the South Dakota Municipal League Hall of Fame last month.

“I still think it’s crazy. I don’t think I’m a Hall of Famer,” said Michlitsch. “It was a good run, but I don’t expect any praise for it. I was just doing my job.”

But Eden Mayor Mary Dunn said she did that job very well for a very long time.

“Carol just had such a wealth of knowledge,” said Dunn, “and she knew the background of things that had happened. She just kind of knew it all. We would always turn to Carol and say, ‘What’s the deal on this? And she would have the answer or she would find it. She made it easy for the board.”

Michlitsch, the daughter of Bill and Lois Schlekewy, grew up in Eden and has spent her entire life in her hometown. She spent 10 years as a cook at the school, and 22 years working at the bank in Eden Michlitsch was asked to take over the part-time finance officer position in December of 1987, officially starting in January of 1988.

The first town board meeting that Michlitsch ever attended was that December session – her training for the job that she would work at for over three decades.

Her banking background molded Michlitsch into a stickler for detail. Couple that with her love of bookkeeping and it made for a recipe for success as the city finance officer.

“My Dad was very good with numbers and had an implement shop in Eden and was a county commissioner for 22 years,” said Michlitsch, “so I guess I kind of followed in his footsteps. The bookkeeping part of it is what I enjoyed most. The thing I’m most proud of is that the books always balanced to the penny. I learned that from the bank. When I first started I was 10 cents off and it just drove me crazy.”

Michlitsch spent her entire 32 years in the office without the aid of a computer.

“Everything has been done in long-hand with paper and pencil. But I tried to have everything done as soon as I could. You never know when anyone’s clock is going to stop, and I wanted somebody to be able to step in and take over.

“”I really never figured out how much time I spent. When it was water and sewer bill time I worked a full day, and the day of the board meeting and the day after were full days of work.”

Jennifer Roerig, who took over for Michlitsch in July, is starting the job at the same age as did Michlitsch, and she is picking up right where Michlitsch left off.

“I had Jenny in mind when I knew I was going to retire, and she’s a perfect fit,” said Michlitsch. “I just asked her if she was going to hang on for 32 ½ years?”

Michlitsch turned 79 years old in August, but she would have continued in her city position if she thought her body would have allowed it.

“It was a great part of my life, and I don’t begrudge any of it at all. That’s why I stayed so long. If my arms hadn’t played out so I couldn’t carry things to the office a block away, I would still be waddling to the office.”

Nothing else seemed to stop her on her way to a perfect attendance record at 32 ½ years worth of meetings.

“I had surgery one time, but we scheduled it around the meeting. One time when I had my knee done, we had meetings down here at the house. We posted it so there was nothing illegal about it. I’ve just been a very, very blessed lady with very good health.”

Now Michlitsch will have a little more time to fulfill another role – that of grandma.

“Life has been very good for me,” concluded Michlitsch. “I have a good family with four kids, 11 grandchildren, and 17 great grandchildren. There are lots of little people and they are just all fun, and I’m Grandma Carol to the whole crew.”

But Eden citizens will long remember the over three decades that she spent taking care of city business.

“I just always looked at the finance officer job as doing my part in the community,” concluded Michlitsch. “In Eden we just try to stick together so people can prosper.”

“It was a good run, but I don’t expect any praise for it. I was just doing my job.”