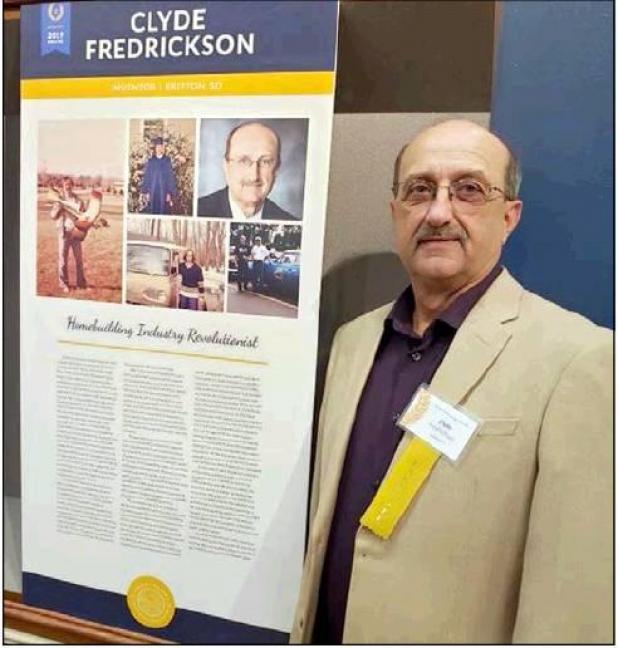 Clyde Fredrickson of Britton was inducted into the South Dakota Hall of Fame in the “Inventor” category. Fredrickson’s inventions have helped to revolutionize the home building industry.

It all began when Clyde Fredrickson came to Britton from Aberdeen to build a house, but what followed literally changed an industry.

prefabrication of construction materials. For those accomplishments he was inducted into the South Dakota Hall of Fame last month and honored as in inventor.

Backtrack about 45 years and Fredrickson did not have a clue he would ever have any connection to the homebuilding industry. After graduating from Aberdeen Central High School in 1973, he was two months away from earning a degree at Lake Area Tech in Watertown in auto mechanics.

“I was going to school in Watertown and my brother, Terry, was in Colorado selling supplies to the housing industry,” recalled Fredrickson. “We had the energy crisis in the 70’s and had a building moratorium, so Terry’s work got really slow. He came back to Aberdeen and we started doing carpentry work together.”

Then came the call to Britton.

“A guy that Dad worked with at the Bureau of Indian Affairs had a friend that wanted a house built in Britton. We got the bid and were driving back and forth from Aberdeen.

Before we had finished we had two other houses to build there, so we moved. I told my wife, Sharon, it was just for the winter!”

But as they say, the rest is history.

In 1977 the brothers built a small shop on the present site of Truss-Pros, Inc., so they could build things like cabinets and roof trusses when the weather got bad. In 1978 they started selling roof trusses to other lumber yards in the area, and Truss-Pro’s was born.

“Terry and John Kraft worked there the first year and I continued to build houses because we didn’t think it was large enough to support all three of us,” said Fredrickson. “But it took off and just grew and grew.”

“One of the purposes of the Hall of Fame is to provide encouragement to other people and inspire them to strive and try that little bit harder to achieve more. And that’s a good purpose.”
--Clyde Fredrickson

The truss market and wood components market was pretty new back then and typically all of the roof trusses for a home were the same size. It would take 15-20 minutes to set up and they would build 30-40 of the same-size truss.

“Then when computers began to be used for architectural design it became a lot easier for architects to design roof lines that had some character to them, meaning there were different shapes of roof trusses,” explained Fredrickson. “It got to the point where about half of our production time was spent just changing the jig for the different kinds of trusses, so we went looking for something to automate that process.”

There had been a couple of early attempts at automation but nobody had much success. The systems out there weren’t reliable, were not accurate, and took a lot of maintenance. So Truss-Pro’s went to work to design a solution for itself.

“Shortly before that we had hired Mark Wismer of Britton to do computer work for us, and Mark and I started talking about the automation issue,” said Fredrickson. “We came up with a couple of ideas, finally thought we had something, and got our patent around the year 2000. Mark and I are listed as co-inventors, and he was instrumental in helping design the end result.”

The end product, after about a fouryear process, was a gearbox with long screws that are computer-controlled to set the truss measurements. It didn’t take long for word to spread of the revolutionary process, and soon there was a strong market for the new invention.

“Our initial thought was to just make it work for ourselves, but when we saw how good it worked we knew there would be a strong market for it,” said Fredrickson. “Now it has almost become necessary in just about every market in the United States and Canada to have automated jigging. I would guess that more than half of the truss plants in the country have one of our products and we have over 400 locations using it.”

Fredrickson also has his name on another patent, along with Terry’s son, Drew.

“Drew and I are co-inventors on an automated nailing machine called a TermiNailer,” Fredrickson said. “In the wall panel business (Precision Wall) there are a large number of nails used with double studs and headers that need to be put together. Now over half of all nails used in a house can go through the TermiNailer. It’s a one-man operation, totally safe, and extremely fast compared to using a nail gun.”

Fredrickson has also developed some material handling devices like conveyors for use at Truss-Pro’s, but those have never been marketed.

The Hall of Famer came by his inventor’s mind naturally. Fredrickson’s grandfather, whom he was named after, had tried to get a patent on a type of pliers for removing needle teeth on pigs. He never did get it but had drawings and sketches. His father did get a patent for a device that made it faster and easier to measure and cut baseboard trim for houses, and along the way taught his sons carpentry.

“We were all just kind of tinkerers,” admitted Fredrickson. “We built model cars and airplanes when we were kids and just learned how to put stuff together.”

Induction into the South Dakota Hall of Fame was a humbling experience for Fredrickson, who has served as Britton’s mayor for the past six years.

“It is very humbling and you don’t feel that you’re worthy or should be there with those people. But then again, one of the purposes of the Hall of Fame is to provide encouragement to other people and inspire them to strive and try that little bit harder to achieve more. And that’s a good purpose.”

Who knows how Fredrickson’s life may have changed if that energy crisis had not resulted in his quitting pursuit of is auto mechanic degree. Or what if he had never taken that wood shop class in high school?

“I was speaking at the Rotary Club in Sioux Falls recently and somebody asked what good advice I had been given,” Fredrickson said. “And I thought of a comment from my junior high band instructor. After about two weeks, he asked me to stay after class, and he had some advice for me – wood shop.

“The next day I was no longer in band, I was in wood shop, and it was some of the best advice I’ve ever gotten. Things that happen in life just have so many unintended consequences,” concluded Fredrickson.